WorldSBK Season Resumes In Earnest For The Kawasaki Racing Team 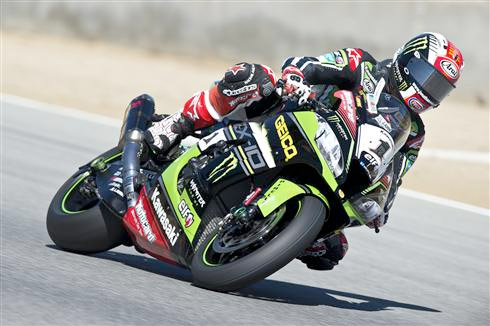 Jonathan Rea and Tom Sykes will recommence their challenge for the 2016 FIM Superbike World Championship title on their Ninja ZX-10R machinery this coming weekend, at the Lausitzring in Germany. Track action will get underway on Friday 16th September, with WorldSBK races to be held on Saturday 17th and Sunday 18th.

At the most recent round of the championship, which took place way back in early July in the United States of America, Rea and Sykes took a win apiece at Laguna Seca on the all-conquering 2016 version of the Ninja ZX-10R.

As the season gets underway again KRT‰Ûªs official riders sit first and second in the championship standings - Rea on 368 points and Sykes on 322 - with four rounds and eight points scoring races remaining. The next nearest challenger after nine of the 13 championship rounds have been completed, is Chaz Davies, who is 62 points behind Tom.

‰ÛÏI rode at the Lausitzring recently on my own road bike Ninja ZX-10R. It was good to get some track time at a new track to me." Rea said. "Our rivals had tested there so it was important.

"It has been such a long summer break. For a few weeks at the start I enjoyed just being at home and after that I knuckled down to be in ideal condition for the last few races. I really put some effort in at the gym, riding motocross and my bicycle. The last four rounds are an important time and they come along in quick succession.

"It is important to be razor sharp to give myself the best possible chance through to the end of the year. My focus now is to increase the championship lead. Personally, I am looking at the last four races as one block because it is going to go by so fast.‰Û