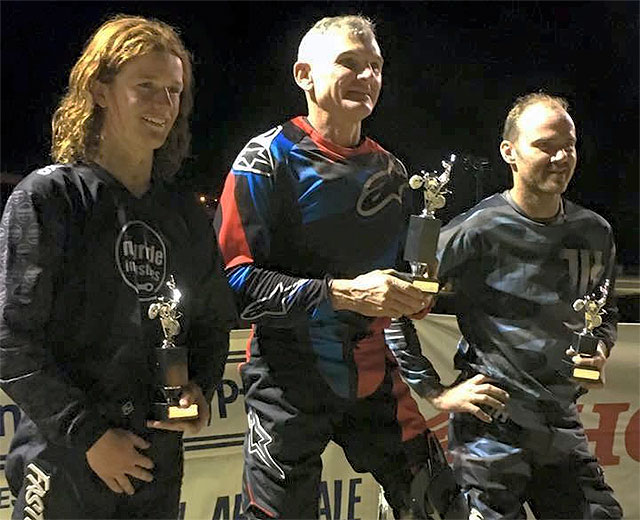 Husqvarna‰Ûªs legendary dirt tracker Paul Caslick proved that at 50 years of age he‰Ûªs still got what it takes to run with anyone in the country, when he added a NSW championship to his career tally at Balcary Park, Gunnedah over the weekend.

Continuing to make a mockery of the established notion of a rider‰Ûªs ‰Û÷prime‰Ûª, Caslick fired his Husqvarna FC450 to victory in the MX Open final of the NSW Track Championship, leading home rising star Mackenzie Childs and decorated racer Michael Kirkness.

Having finished third in last year‰Ûªs event on a bike he‰Ûªd barely run in, Caslick was certain he‰Ûªd have the pace, and entered the event with a renewed hunger he attributes to a sharpened mental technique.

However, he was forced to work around an injury, after he was punted from the bike in a botched overtake, the aftermath of which caused severe bruising to the glutes and hamstring.

Earlier, the nine-time Australian champ and Team Manager of the Husqvarna Australia Dirt Track team pocketed the cash in the Over-35s category, and finished on the third step of the podium third place in the Pro 450cc NSW Championship. 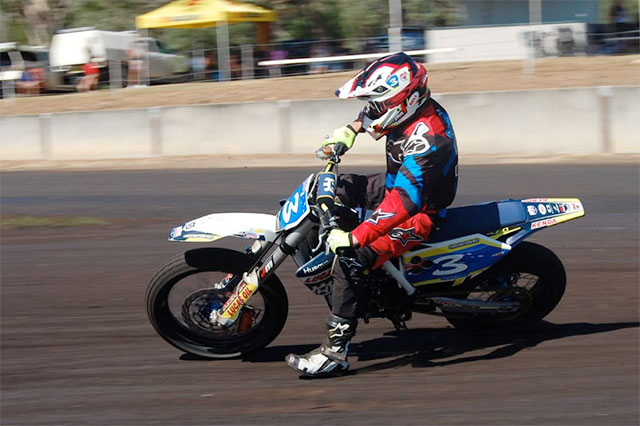 50-year-old Paul Caslick on his way to a NSW title. Credit: Darren Hoarey
"It‰Ûªs a nice feeling to win this title," Caslick said "It wasn‰Ûªt given to me either. I came from behind in each race and was carrying an injury after Mick lost the front while coming up the inside knocked me off the bike harder than I have been in 42 years. Now I know how kangaroos feel when cars hit them! We were flat out sitting on the bike on the dummy grid after that, so I had to grit my teeth.

"We gated solidly in the MX Open final, and young Mackenzie Childs who‰Ûªs probably about 35 kilos dressed, grabbed the lead, and then we progressed into our own battle. I was pressuring a lot of riders in that last corner and I was pretty confident he‰Ûªd make a mistake in that area. The gap opened up and I jammed the bike up the inside and we were across the line with the win. I was pretty stoked with that one.

"I‰Ûªve recently gone back to the mental training that I used to use quite heavily before I met Dee, in order to go out and find that killer in me again, and not just go out there because I love it. I turned up at that meeting with that killer attitude because of what I‰Ûªve been researching, and I was ready to chew through steel.‰Û