Valentino Rossi Back On Top After Wet British GP Win 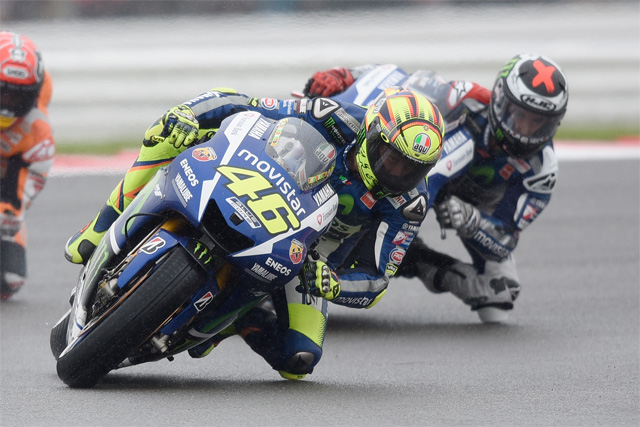 Rossi mastered the MotoGP field under difficult conditions, taking his first victory at Silverstone to continue his streak of consecutive podiums finishes this season, making it twelve.

Tension built as rain picked up just as the race was about to start. The race was declared dry, so all riders had to make the agonising choice whether they would start from pit lane on a wet setting or on slicks from the grid. However, after the warm up lap all riders decided to come into pit lane to swap bikes, making race direction decide to delay the start and reduce the race to 20 laps.

Twenty-five minutes later the MotoGP field lined up on the grid for a second attempt, this time prepared for a wet race.

Rossi was the fastest man in similar conditions in the morning warm up and quickly fought his way up the order from his fourth place grid position. The Doctor moved into third position to hunt down Honda's Marc Marquez, passing him with a brilliant move at the start of the second lap.

The nine-time World Champion then set his sights on his teammate and increased his pace. He made the audience cheer when he took over the lead, posting a 2'21.807, the fastest lap of the race thus far.

Under pressure from Marquez, he continued to pick up the pace and used his experience to keep his rival at bay until the Spaniard crashed out with eight laps to go, but the race wasn't won yet.

With two laps remaining Rossi raised the bar and expanded his margin by nearly one and a half second to take a faultless victory by 3.010s over Petrucci with Dovizioso crossing the line in third.

"I'm very happy and proud of this victory, it's a great feeling! I think that the last race on the wet that I won was ten years ago." Rossi said.

"This morning I woke up feeling good, but my team also did a great job and my bike was fantastic already from the first lap of the warm up. I felt great and got more feeling and positive things from the bike, so I knew I could be competitive in the race.

"I fought a lot with Marc, which was very difficult. I kept trying to break away but he stayed with me. I saw that Marc crashed on the mega screen and I didn't hear noise of his bike, so I already thought that maybe something had happened.

"After he crashed I slowed down, because I thought I had enough of an advantage but in reality Danilo wasn't so far, so I had to recover my concentration and start to push, because if I didn't he would catch me.

"This is my fourth victory of the season, so I'm very happy and it's important for the championship. Today I was very fast, I had great confidence with the bike and it's a fantastic victory at Silverstone, where I never won before, this is the first time!"

Rossi's first place earns him 25 points, while his team-mate Lorenzo who finished down in fourth fourth place gives Rossi a 12 point advantage in the championship over his team-mate.

Australia's Jack Miller was on fire in the wet conditions early, making his way all the way up to 6th place before crashing and taking his team-mate Cal Crutchlow out with him in the process.