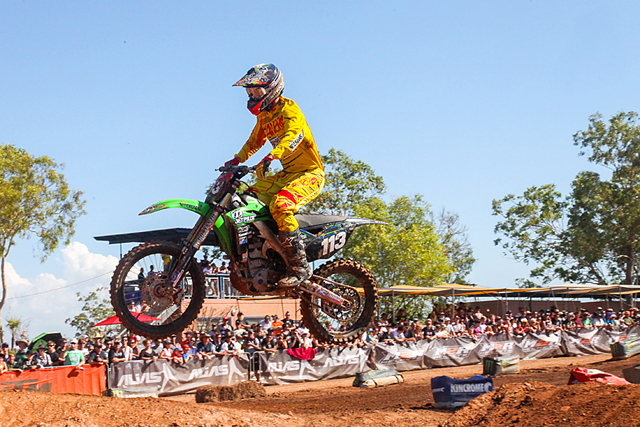 Wilson's Jetpilot Racing's Luke Wilson has kicked off the teams 2013 Terex Australian Supercross Championship on the right foot with a top ten finish at round one held at Hidden Valley Raceway in Darwin on Saturday the 14th of September.

Wilson headed into the open weekend of the 2013 Supercross season a little unsure of how he would hold up due to a big crash at the final round of the 2013 Monster Energy MX Nationals just two weeks earlier that left him with a slight concussion and also a tweaked back, restricted the amount of riding he was able to get in before the gates dropped in Darwin. Despite the set back Wilson was still confident of racing to his goal of a top ten finish at the open round.

With Darwin turning up the heat for the riders, Wilson acclimatised himself to the humid hot weather during practice on Friday and with no real ill effects from his Coolum crash, headed out and set the 12th fastest time in Qualifying on Saturday morning.

A solid ride in his heat race had the Gold Coast resident feeling confident heading into the late afternoon main event where he once again did not disappoint, racing to a tenth place finish and in the process hitting his first main goal of the 2013 season.

"It was good to get out there and get the Supercross season underway, I was definitely happy with the result on Saturday," Wilson stated.

"Even with the great result I still feel that I can ride better, unfortunately due to my crash at Coolum I was held back with the amount of riding and training I could do in the lead up to Darwin and I could not get in the Supercross riding that I needed to."

With round one done and dusted, the team packed up for the night before returning to the track on Sunday for round two of the championship as the series got underway with a double header event ran alongside the Australian Superbike Championship.

Unlike Saturday, Wilson endured some lower back pain during Sunday's qualifying session, though the pain up subsided by the time racing got underway later that day. 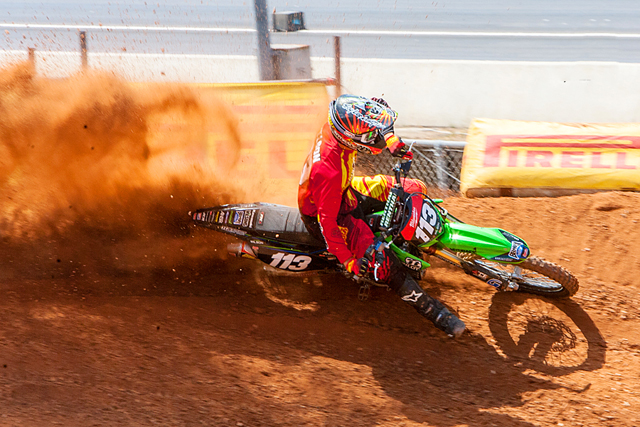 Luke WIlson as the sole Kawasaki rider in the Pro Lites class at the opening rounds currently sits 10th in the championship standings - Credit: Aaryn Minerds
The sole Kawasaki mounted rider on the gate in the Pro Lites class once again raced hard when the main event got underway for round two, riding through arm pump to finish in 11th place and securing a top ten position in the championship position after the opening two rounds of the year.

"It was good to back up the result on Sunday, though I was outside the top ten it was only just and I leave the opening weekend of racing inside the top ten which was the goal," the Kawasaki KX250F pilot continued.

With the Darwin event in the books, Wilson will immediately turn his attention to round 3 being held in Mount Gambier, South Australia on the 12th of October.

"I am looking forward to the four week break before the next round, I will be spending that time riding and testing to make sure I am further inside the top ten at the next round.

"My back is still a little tight so I am hoping that the break in racing will also give it the time it needs to sort its self out." Wilson concluded.

Top Image: Luke Wilson raced to a 10th place at round one of the 2013 Australian Supercross Championship held in Darwin
Credit: Aaryn Minerds