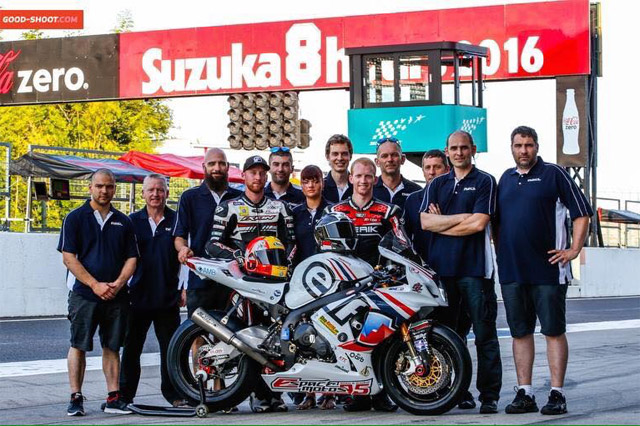 Newcastle rider Aaron Morris has had a great debut seaoson in EWC riding for the French SUZUKI Team R2CL.

Finishing 9TH in the World Championship in his first year was a great start to his international career.

After flying to Spain and testing pre season at Albercete , Aaron was selected in the Team‰Ûªs starting lineup.

The season got under way at the Le Mans 24 hr , and it was a baptism of fire to go from 25 lap Supersport sprint races that he was used to , to one hour stints on a Superbike totalling 8 hours of riding each during the 24 hr event .

Having temperatures as low as one degree through the night sessions also added a degree of difficulty not seen in Australia. It rained three times throughout the race but between Aaron and his team mates they brought their GSXR 1000 home in 4th place , even though they had ongoing brake binding problems which cost unscheduled stops .

Round 2 and onto to Portimao Portugal where in qualifying one of his teammates crashed and broke his arm. This left Aaron and Nicholas to complete the 12 hour with 2 riders . After the first couple of stints and sitting in 10th, Nicholas crashed on anothers bike‰Ûªs oil and went down. After the bike was repaired Aaron returned to the track and although running in 24th place was the fastest rider on track , even quicker than the GMT94 Factory Yamaha rider Mahius who was leading the race.

Aaron regained a few spots and handed over to Nicholas for his next stint. Not long into that stint Nicholas got tangled with a slower rider and the bike was badly damaged and they retired.

Fortunately the points gained at the 24 hr race still kept them high in the overall points tally.

Onto Suzuka and World 1000 Superstock rider Sebatien Suchet was drafted into the team for the 8 hour event. It was both Aaron and Sebastien‰Ûªs first time at Suzuki and they qualified 22nd out of 69 starters , next to fellow Aussie Ant West.

As the race wore on they made their way forward and stayed consistent with an overall result in 12th , and just outside the top ten. Aussie Broc Parkes was the first European Team home and TEAM R2CL were the second. Having Team Honda Europe and GMT94 Yamaha Europe behind us was a great result for the small Paris team.

Oscherleben was the last round and the team elected not to run and direct the funds toward the Bol D‰Ûªor 24 hour on the 18th September 2016. This is round one of the 2017 World Championships .

Fortunately when the overall points were tallied up , TEAM R2CL finished in ninth place which is a great effort.

Special thanks to TEAM R2CL and Raphael for providing Aaron with this opportunity. Thanks to Ficeda Australia for the BERIK leathers and gloves . And SCICON Bicycle Transport bags for their help.