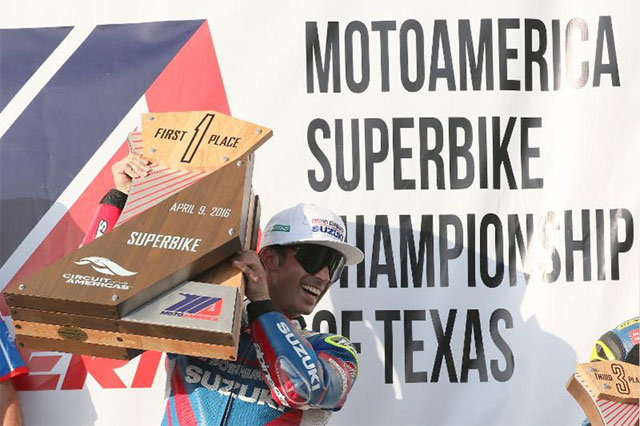 Former Moto2 World Champion and MotoGP race winner Toni Elias made the most of his opportunity as a replacement rider on the Yoshimura Suzuki team today, the Spaniard riding to a maiden MotoAmerica victory in a red-flag interrupted season opener at Circuit of The Americas.

Elias was struggling in the opening portion of the race with a bad sensor on his GSX-R1000 (normally ridden by the injured Jake Lewis), but he more than made up for it after the red flag as he stormed to victory, holding off his temporary teammate Roger Hayden and Monster Energy/Graves Yamaha's Josh Hayes for a popular victory in front of his MotoGP friends, former teammates and mechanics.

For Hayden it was a reversal of fortune, his two-plus-second lead in race one going for naught when Kyle Wyman's motorcycle blew up on the backstraight, dropped oil and ultimately caught fire, bringing a stoppage to the race after four completed laps. When the race was re-started for a five-lap dash, Hayden lacked grip and found himself embroiled in a last-lap battle for second with Hayes and ultimately thwarting the Yamaha rider's attempt at a last-corner pass. 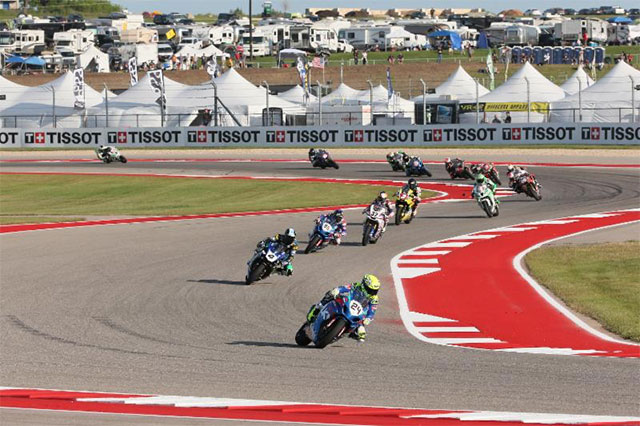 If Elias winning in his debut was big news, so too was the fact that 2015 MotoAmerica Superbike Champion Cameron Beaubier crashed out of the race while leading on just the second lap. The DNF puts the defending champion on his back foot going into tomorrow's race as he's 25 championship points down on Elias, 20 down on Hayden and 16 behind his teammate Hayes.

"I suffer a lot in the beginning of the first race," Elias said after victory.

"I try to follow Roger (Hayden) and Cameron (Beaubier), but was impossible. First of all I thought it was a rear tire, maybe something was wrong. I couldn't control the rear slides. After two or three laps it start to lock on braking the rear wheel, go straight and (I make) many mistakes. I be lucky when I see the red flag because I go straight to them (the crew) and say, 'Something is wrong.' Yesterday was much more comfortable and it was not the tire, not the track. It was a little sensor that was broken and they finally find the problem and the second race the bike was perfect, just like yesterday. I had grip and it was controllable. I push a lot, but I had some attacks from Josh (Hayes), but I want to win. And finally we did it and I'm happy. I want to thank Yoshimura Suzuki for giving me this opportunity." 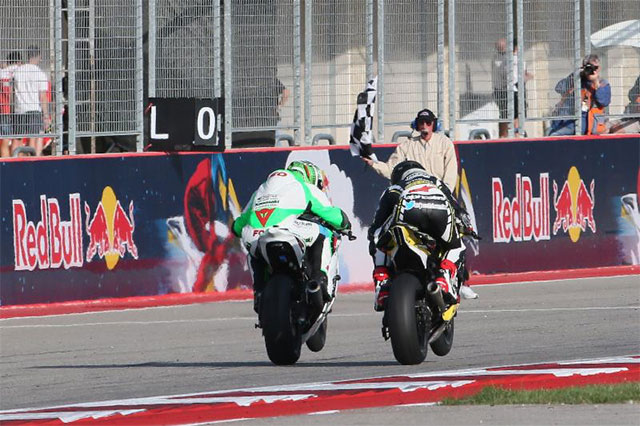 Bobby Fong (left) barely beat Josh Herrin (right) to the flag in their Superstock 1000 battle. Credit: Brian J Nelson
Garrett Gerloff followed up his his pole-earning performance of yesterday to win the opening round of the 2015 MotoAmerica Supersport Series, the Texan taking victory in his home race by 1.004 seconds over his teammate JD Beach, the defending series champion. The Y.E.S. Graves pairing were locked together for the entire race, but Beach could never find a way around his teammate.

"I've been putting a lot of work in during the off-season and I don't want to be working my butt off for nothing, so I definitely wanted to win," Gerloff said. "It definitely made it special that it was at my home track and I have the Texas flag on the back of my helmet cause this is where I'm from and grew up. It's definitely really special." 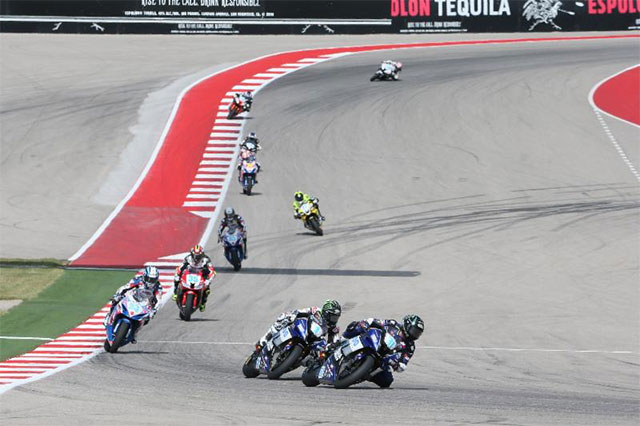