Tom Sykes Hard On The Gas After Winning Title 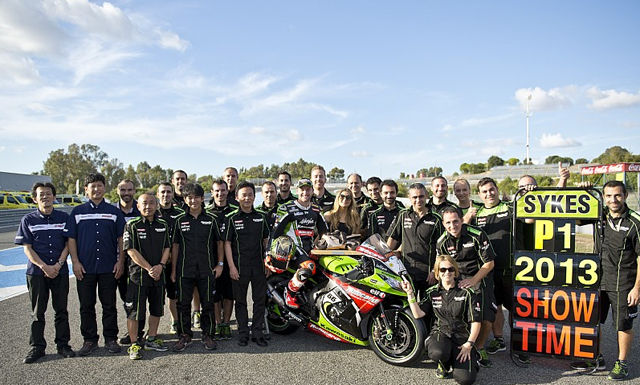 After Tom Sykes and the Kawasaki Racing Team had won the World Championship on October 20th you may think that all the hard work had been done. Not a bit of it, as things were only getting started.

Ultimate success is the aim of all who get involved in major motorsports championships and in 2013 Tom Sykes won his first ever World Championship crown, while Kawasaki won their first World Superbike Rider‰Ûªs Title for 20 years. A great job well done, an honour shared by all involved.

An indication of the extra work and global focus that arrives when championship success brings extra attention can be seen even if we only look at what happened immediately after Sykes took his title, where Sykes wrapped up the title in Spain after race one at 12.45pm Sunday, but did not leave the country to head home until after 8pm on Monday morning once all official proceeding were over!

This was only the start of his winter testing and PR activities, which this year have become all the more frequent and intense because he is the world champion - and halfway through it all he become a father for the first time as well.

A few days after leaving the final round of the year Sykes was back at Jerez testing, between 30 and 31 October. He did not quite get to test on track at Motorland Aragon in mid-November, as this was when his daughter was born.

On the 5th and 6th of November Tom was the star of the EICMA Motorshow in Milan and played a part in the Kawasaki World Conference press event. On home soil, Sykes attended the NEC show in Birmingham on 23rd November in association with Kawasaki UK - and then went back again on 29th November to join the Kawasaki Club Riders Club at their popular event.

He returned to Jerez for a three-day test between 25 and 27 November (shortly before the off-season test ban started on December 1) to take the fastest lap of all and reconfirm 2014 plans for bike development.

He left from there to go to Monaco for the annual FIM Gala, to collect his world championship medal and certificate from the FIM President. More recently he collected the prestigious Caschi D‰ÛªOro (golden helmet) award from Motosprint Magazine in Italy, on 5th December, before visiting the Kawasaki factory in Japan shortly afterwards. During his Japanese trip he met the President of the motorcycle division as well as other Kawasaki staff, including the team behind the Ninja ZX-10R roadbike.

A busy schedule all round, you have to agree, with Sykes simultaneously looking forward to some time off from his travels, but he also knows exactly why he has been so busy. Success.

Having narrowly missed out on the championship in 2012, Sykes was happy to have so many things to do in the winter of 2013, after achieving his lifetime‰Ûªs ambition of becoming SBK champion.

‰ÛÏI am very fortune to be the world champion and it is such a fantastic feeling,‰Û