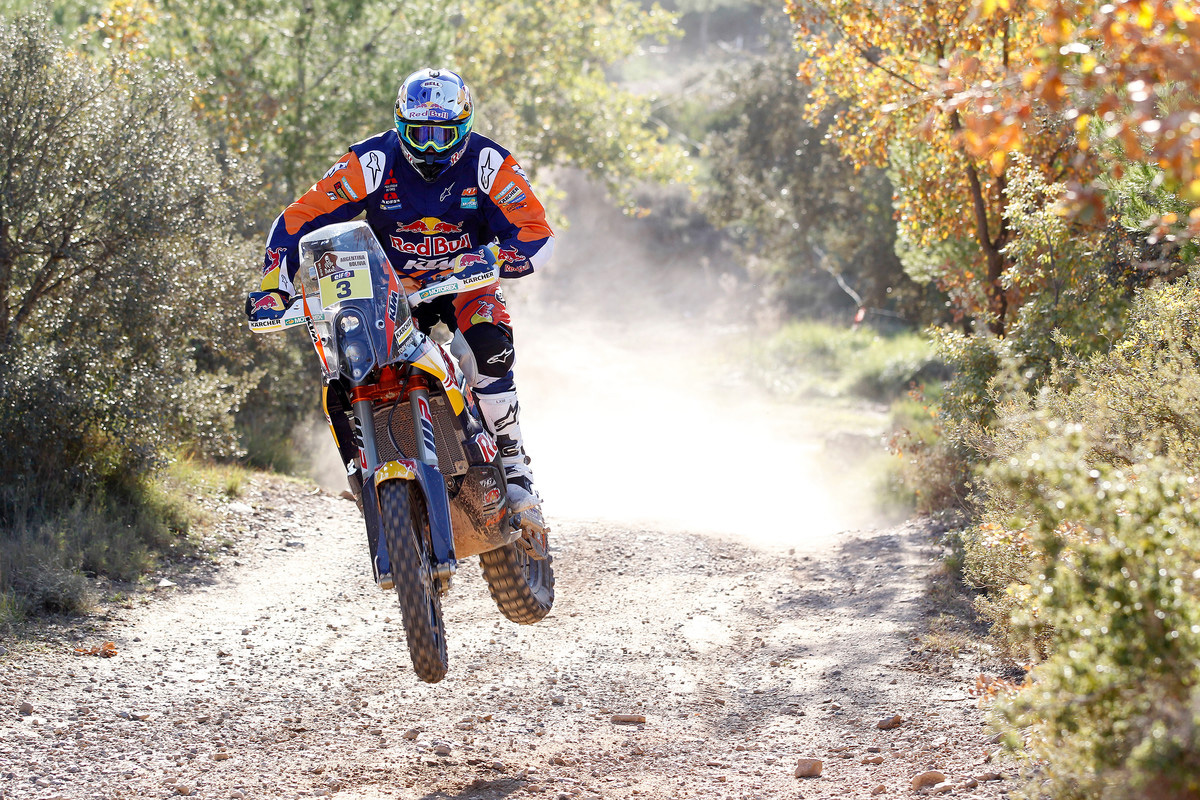 Australia's Toby Price has moved himself back to within striking distance of reclaiming the 2016 Dakar Rally race lead with his second stage win over night on stage five from Jujuy to Uyuni in Argentina.

Starting the day nearly 8 minutes behind race leader Paulo Goncalves, Price aboard his Red Bull Factory KTM crossed the line lead at every intermediate point throughout the second day of the first marathon stage of this years event, outclassing his rivals to cross the finish line 2 minutes and 21 seconds ahead of Frenchman Antoine Meo and in doing so put himself back within striking distance of reclaiming this years race lead.

Stefan Svitko and Matthias Walkner finished the day in third in fourth positions, giving KTM an amazing top four positions for the stage, with Joan Barreda rounding out the top five aboard his HRC Honda.

Despite finishing back in 12th position for the day, HRC Honda's Goncalves continues to lead the event by 1 minute and 45 seconds over Svitko, with Price a further two-seconds back in third position.

‰ÛÏThis marathon stage was definitely difficult." Price admitted at the end of two big days in the saddle. "Today was a little bit tricky with the navigation. I had to stay on top of the game.

"I caught a couple of other guys and got in some dust. I made a couple of little errors in the end there, because I was a little too worried to take my eyes off the road. It was a pretty crazy track. All in all, we're stoked.

"I didn't expect to be that far ahead for the day. I caught a couple of guys, but I thought the other guys in front were on a good pace. We're stoked. We've got another long day tomorrow and we'll see how we do.

"The track was just like big open roads, so on most of it you could get on the gas and go pretty good, but then on probably the last thirty or forty kilometres it was pretty hard navigation and I was trying to stay on top of things. We just tried to push when we could and try to hold back when we had to, but we've come away with a good result, so it's a good day.

"I know we've got the stage win, but I'm not too sure where we are overall, but we're stoked and happy with everything. We've just got to keep pushing along and do what we can. Fingers crossed, but there's still a long way to go.

"We can't count on things just yet. Today is only day five. We've got another seven or so stages to go and it's a long way. Anything can happen between now and then. We'll just try and make the right calls when we have to and push when we need to, so we'll see how we go.

"The bike is good. I didn't crash or do any damage to the bike. It's running really well. The guys have done a really good job. All is good, just the tyres were starting to get worn out at the end and it was hard to hang in there on those slippery roads, but it made it a bit of fun‰Û