Toby Price podiums on two and four wheels at Clipsal 500 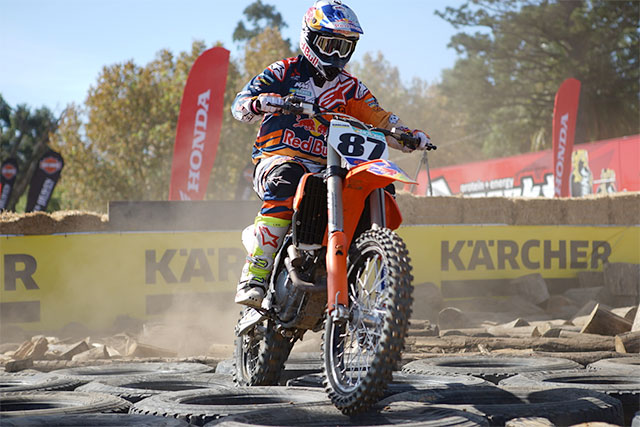 KTM Red Bull Racing Team rider Toby Price added yet another impressive sporting achievement to his already bulging resume when he managed podium appearances on both two and four wheels at the same event.

The occasion was the V8 season-opening Clipsal 500 in Adelaide, and the 2016 Dakar Rally winner returned for another appearance in the awesome Stadium Super Trucks competition in which he impressed at last year's event.

Undoubtedly one of the busiest men in a very high profile pit full of famous motor racing identities, Price undertook to do double duty, competing in the 2016 Enduro-X Cup on a track of his own design across the weekend.

The Maitland, NSW native powered his KTM 350 SX-F to a podium finish during Friday‰Ûªs competition, then used the same machine to win Super-Pole and finish second in the main event - Saturday's 2016 Enduro-X Cup - behind Husqvarna's Mitcham Harper and ahead of Lachlan Stanford.

Price‰Ûªs former KTM Desert Racing teammate Ivan Long also tried his hand at the Enduro-X Cup, and was sixth for the night.

"It was a flat out program but we got through it, definitely feeling pretty worn out today," Price said.

"The Clipsal 500 people offered the idea to put an Enduro-X there and I think the show turned out pretty good. The crowd response was good so hopefully we‰Ûªve started something pretty good.

I was really looking forward to racing the Stadium Super Truck, so I definitely didn't want to crash on the motorcycle and throw away my driving the truck, plus I've got the first round of the World Rally Raid Championships coming up in Abu Dhabi in April so we needed to play it smart on the bike.

"I got through as best I could, and got to podium both on the bike and in the Stadium super truck, which I feel pretty dam pumped about, for the weekend.

"On day three we had a little bit of drama, one of the boys tagged me on the rear and spun me out so it was a bit of a bummer with that, but that's the way it goes, I'm still learning in the truck. For my very second drive and race, some of the boys said I had done a pretty bad-arsed job, because I was on the pace and faster than most of them. So hopefully that will lead to more drives.

"On the bike my starts let me down a little bit and I had to try and come through, but all the boys were riding really fast. I didn't even get onto an enduro cross track before the event, basically got the bike set up on the Wednesday before it came down here so it was all last-minute preparations for me. So to finish second on the main night was pretty cool, and I'm stoked to come away with podiums in both disciplines.‰Û