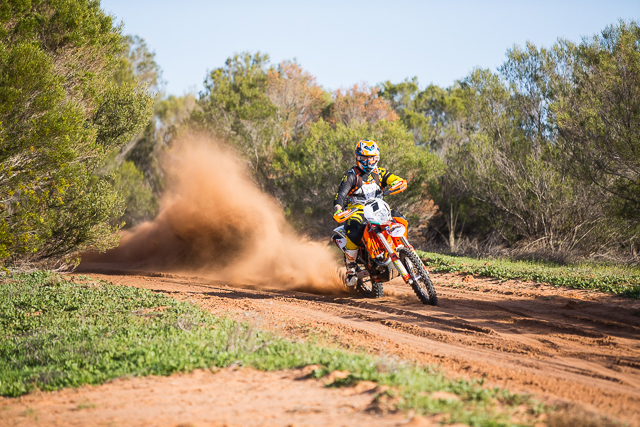 Toby Price has dominated the 2015 Penrite Oil Desert race, leading the race from wire to wire to post a 3 minute win ahead of KTM Off-Road Racing team-mate Tye Simmonds.

With the race being held under bright blue skies 45 minutes outside of Mildura, Toby Price took full advantage of Saturday's prologue win to lead the field away from the start and run in clean air, setting a cracking pace from the outset.

Posting an opening lap time of just over 29 minutes, Price lead the way from Simmonds on lap one by 45 seconds with local Nathan Trigg holding down third position a further 24 seconds adrift. Cairns Coconut Resort Honda Racing Team's Jacob Smith was in 4th, with Active8 Yamaha's Josh Green back in 5th after a get off on the opening lap.

By the end of lap two Price opened the lead up to over one minute over Price, while Smith moved past Trigg into third position. Lap three seen Price further extend his lead over Simmonds, while Trigg moved back into 3rd place with Green also moving ahead of Smith into 4th position. KTM's Daniel Sanders moved his way into 6th position while Active8 Yamaha's Beau Ralston who started from 11th had moved his way into 7th.

The big news of lap four was Smith heading the wrong way in the standings, slipping down the field to 11th, with the Honda's riders race coming to an early end shortly after.

Heading into the final lap Price held a commanding 2 minute and 35 second lead and was able to pull another 30 seconds on second place to cross the finish line in 3 hours and 35 minutes to make it back to back victories for Australia's desert racing king and a record equaling 5th Hattah win.

‰ÛÏAnother win today and I'm stoked." Price commented. "It was a good run, after winning the Prologue yesterday we started off from the front and I think that definitely helped, the dust was thicker in the first part of the race before the track chewed and exposed a little bit of moisture in the sandy parts.

"In the first couple of laps I put on a really good charge and pulled a bit of a gap, and after that I settled into a comfortable pace in and felt really good. The whole team worked really well once again and gave us the equipment that we needed to get a 1-2, as well as a fourth place position and Louis in eighth. It‰Ûªs unreal. 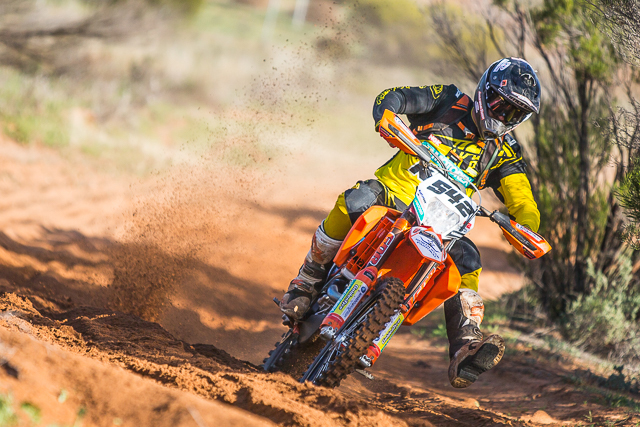 ‰ÛÏIt was a good day, I loved it back in the day when I did it so I kind of had big expectations and in the end we got there so I'm over the moon." Simmonds admitted. "It was so much fun; the first four laps before it started to get a little bit rough, I was having an absolute ball.

"Obviously there is a reason why Toby is the number one and he showed again today that he is the man to beat. We got a good start and yesterday we walked 8K of the track, so I was all over his wheels for the first 8 kays, but then we got to a new part of the track that I hadn't seen and he checked out.

"After that I had a lonely race; Toby was gone and I pulled a gap pretty quick on third, and I don't think it really got under a minute and a half.

"Mick, Trav and Grabbo, they set everything up perfect for us, we didn't even have to do much testing this week, I think we changed a few clickers and that was it. That was all we had to do. So that tells you how good our bikes are and how good we‰Ûªve got everything set up.‰Û 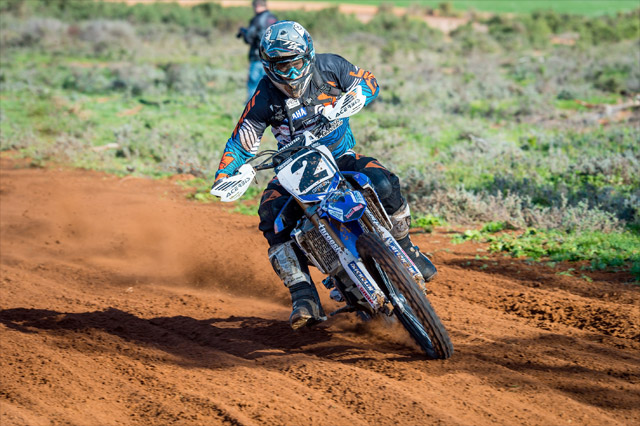 ‰ÛÏThe mistake on the opening lap is what cost me a better result,‰Û