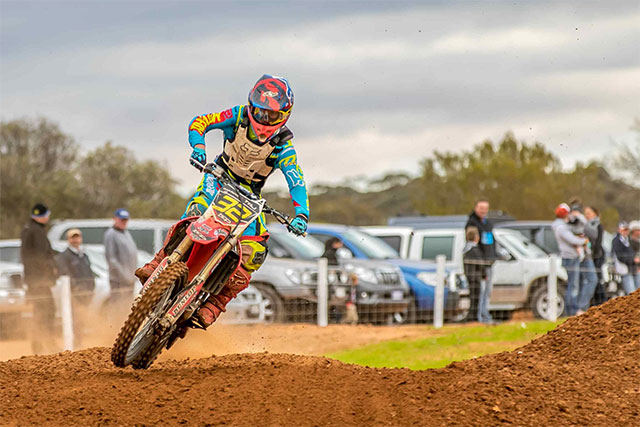 The Riverland Motorcycle Club in Renmark, South Australia hosted the most recent round of the SA motocross championships over the weekend in stunning conditions. The brand new track layout was a big hit with both fans and riders alike.

BCP Pro Circuit Honda Junior Development rider Taj Marshall made the treck west from his home state of Victoria to have a hitout on the circuit that will later in the year host the National Junior Motocross Championships where the number 32 rider will defend his crown against the countries best.

An average start in moto one of the 250cc A grade saw Marshall make his way through the pack by mid race distance and was battling for second place when a small mistake in one of the sandy corners put him on the ground. Remounting quickly Marshall charged back into third place where he would stay for the remainder of the race.

Moto two saw the Victorian with a much better start in third place and a few corners later made his way into second place and set off after the leader. After a tough battle for the majority of the race Marshall made the pass on Victorian rider Morgan Fogarty and started pulling away. With only two corners to go, a lapped rider lost control in front of Marshall and took both riders off the track, relegating Marshall back to second place in the race.

The final race of the day Taj Marshall started in second place behind gun Victorian racer Callum Norton and that is where he would stay until the chequered flag was waved. A third and two second placings would give Marshall a third overall on the day.

"We have got a bit of work to do but I know what I need to do," said Marshall.

"It took me a while to get the hang of the track as we only got three laps practice this morning and this was my first time on the track. I got to watch Callum and Morgs race the 125 yesterday but there is no substitute for riding the track.

"I felt great in the second moto and felt like I had the win until the lapper lost control but that's part of racing. I'm really disappointed in my last moto because I'm normally one of the riders that goes better the rougher the track gets. I'm going to head home and do everything I can to make sure that it doesn't happen again." 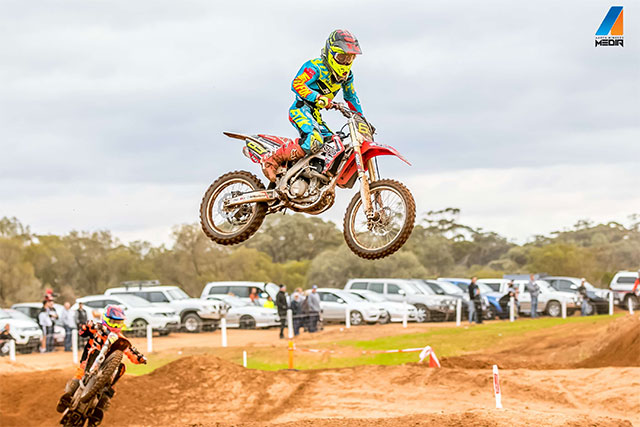 Tom Bell looked at home on the big 250 in the sandy conditions. Credits- Aaryn Minerds
Marshall's team-mate Tom Bell rode an impressive race just one step off the podium in fourth place for the day.

"I felt like we made some progress on the 250 today but I'm still a few seconds a lap off where I want to be," said Bell.

Team Manager Lee Hogan added, "It's good to see Tom get a fourth place and take some steps forward on the 250. He is riding with more confidence and he loves this surface which should be good for the upcoming Aussie titles,"

"Taj rode well but we have some work to do to get him to the level of where he was at last year's nationals where he took the title. It has been tough for him this year starting an apprenticeship early in the year as a 15 year old and to be honest he only really gets to ride the bike once a week with minimal time for fitness training. But we still have four months to get him up to peak lever. It's a tough class this year with everyone putting their best foot forward."

The final round of the Victorian Junior Motocross Championships will be held this coming weekend at Mildura.