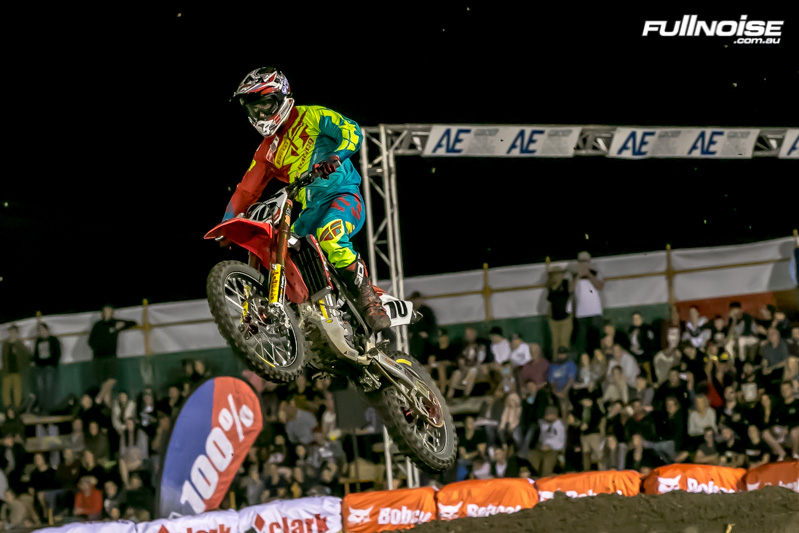 Brayton takes win for the Honda Genuine Racing Team in Round One of the Australian Supercross Championship.

Justin Brayton rode within his limits on a demanding Jimboomba track to claim the win in round one of the Australian Supercross Championship. The Iowa native was satisfied with his opening performance. "I am happy we tookthe win. The track became super slick which made it technical.

"I had to use every ounce of my experience and ride smart." Braton admitted. "If I pushed any harder, I could have ended up on my head".

Brayton arrived in Australia just three days prior round one, which required a huge effort from the entire team to ensure every measure was taken to be adequately prepared. The collaboration between American Honda, Honda Australia and the race team worked like a well-oiled machine, with each playing an integral part in putting the program together.

Glyn Griffiths of Honda Australia is proud of everyone's achievements.

"It was a massive effort and the results are a great reward for the hard work everyone has put in".

The teams second 450 pilot, Adam Enticknap was frustrated by his performance and has created a plan in preparation for round two.

"Tenth was acceptable, but the team and I are better than that. I was tired, this is my first overseas event and I wasn't as prepared as I should have been. The crowd and team are amazing and I feel so welcome. I will be doing my best to show what I can bring!"

Team Manager Steve Powell is happy with the results, but understands the realisation that this is the first of six rounds and the team has a lot of work ahead to stay on top.

"With all things considered, this is a fantastic result! We have identified some areas of limitation and weakness that we will aim to improve. Overall, we will remain focused on our goal and keep progressing ahead of round two in Toowoomba" 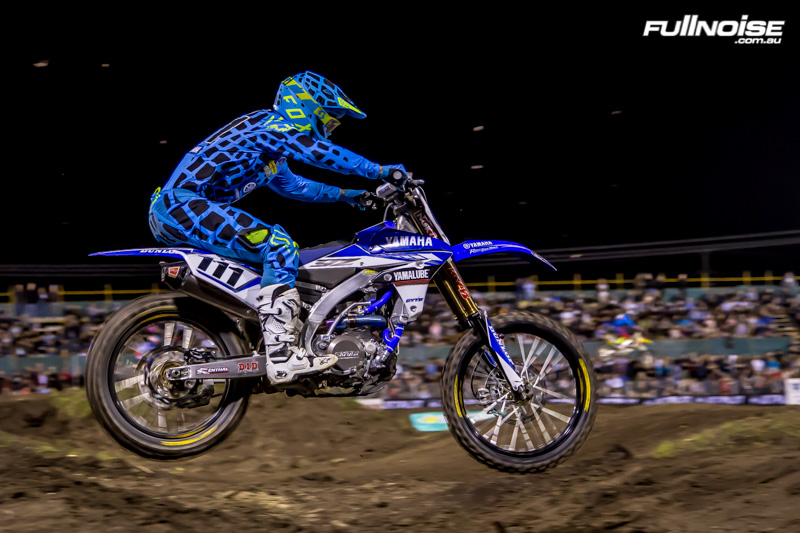 In front of a capacity crowd at the Jimboomba- X Stadium, CDR Yamaha‰Ûªs Dean Ferris and Dan Reardon put their factory Yamaha YZ450F‰Ûªs on the podium to take second and third respectively at the opening round of the Australian Supercross Championship (ASX).

Despite the short preparation period, the Yamaha teamsters got their ASX championship aspirations off to a near perfect start with both riders looking great on the bikes and knowing the solid hit-out will have them well placed as the championship moves towards round two in a few weeks‰Ûª time.

Known more for his motocross speed, Dean Ferris showed he has the skills when the dirt goes inside a stadium and the lights go on as he powered his way to an outstanding second place finish behind US import, Justin Brayton.

Ferris qualifying well throughout the day but when the gate dropped for the 20 laps, 20 rider, SX1 main event, it was Ferris who snatched the lead exiting the first turn. He instantly came under pressure from Brayton who managed to sneak by on lap three. But Ferris didn‰Ûªt give up his pursuit of the fast US rider and by lap 15 was back within striking distance and the race was set for a thrilling final few laps.

Ferris made a lung at Brayton with a couple of laps to go but couldn‰Ûªt make the pass and then when he made a small mistake, the gap opened up ever so slightly and Brayton hung on for the win with Ferris taking second, just 3.6 seconds behind.

‰ÛÏEveryone keeps telling me I‰Ûªm an outdoor guy but I really like riding supercross and when I prepare for it, I think I can go well,‰Û 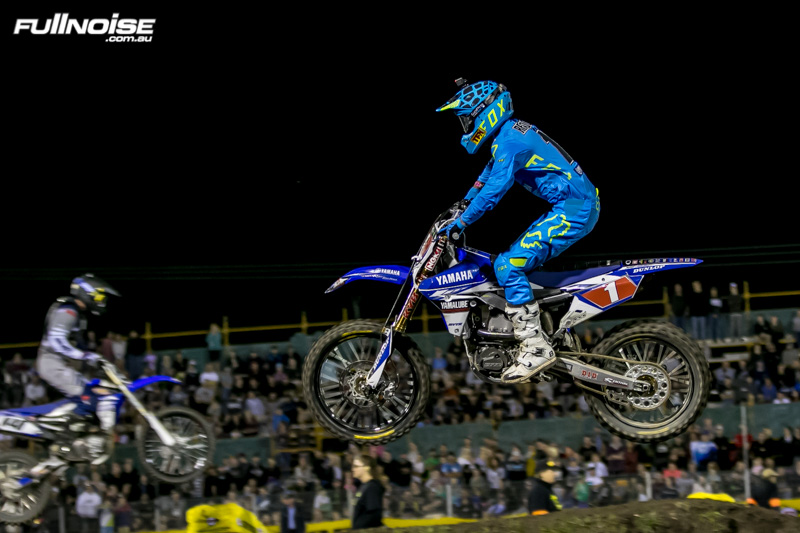 Dan Reardon - Credit: Aaryn Minerds
Current ASX champion, Dan Reardon had his first race back from a serious knee injury which sidelined him for three months and the day went exactly as planned. Reardon claimed a third place finish to put himself well in contention to retain his number one plate in the six round championship but more importantly, he came away with a clean bill of health as his knee stood up to the rigors of racing.

‰ÛÏThe goal tonight wasn‰Ûªt about winning the race but getting a good result, getting 20 racing laps under my belt and continuing to build speed and fitness as the championship progresses,‰Û 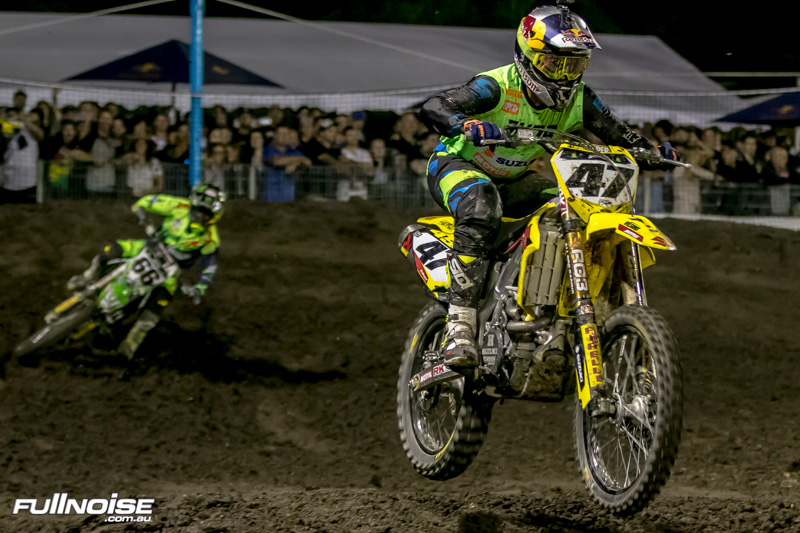 Wilson Coolair Motul Factory Suzuki SX1 riders Todd Waters and Luke Wilson got their 2016 Australian Supercross Championship campaigns started in spectacular fashion on the weekend, in what was a huge round one of the series at Jimboomba in Queensland on Saturday night.

Both Waters and Wilson showed impressive speed throughout the season opener, battling with Australia and the worlds fastest Supercross athletes across a heat each, as well as a hard fought 20 lap main event.

Waters, who had not raced Supercross since 2012, showed that he‰Ûªs in no way ‰Û÷rusty‰Ûª when it comes to the technical discipline. Waters secured an impressive second place finish in his heat behind the SX1 defending champion, while in the main event, Waters was with the lead pack from the minute the gate dropped. Despite making one last challenge for a podium position in the final turn of the race, Waters took the chequered flag in fourth on Saturday night.

‰ÛÏI feel like I should have been on the podium tonight but I gave it away a little bit. Anyway I know my speed is there. I came from way back in the pack and passed a lot of riders to get to fourth,‰Û 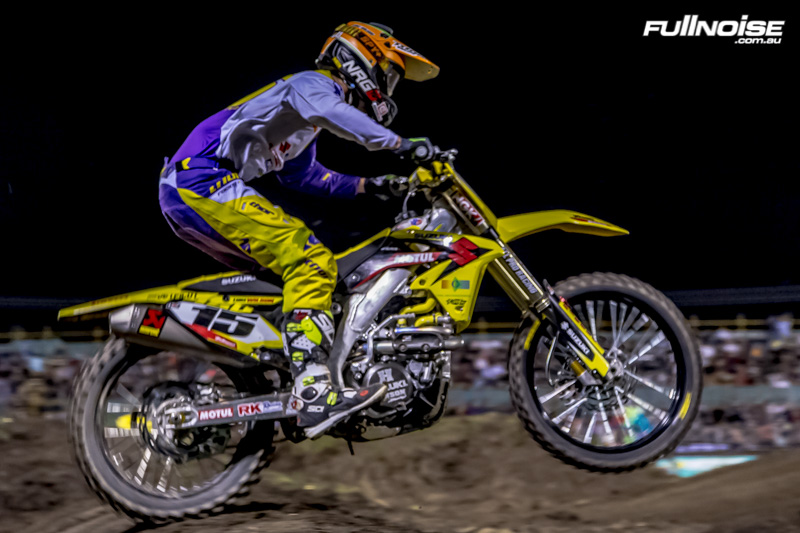 Luke Wilson - Credit: Aaryn Minerds
For Wilson, round one was yet another break through result for the Suzuki mounted Queenslander. After taking fifth in his heat, Wilson went on to race to an impressive seventh in the SX1 main event ‰ÛÒ ensuring the Wilson Coolair Motul Factory Suzuki 2017 machines were well represented inside the talent packed top ten at Jimboomba.

‰ÛÏI‰Ûªm pumped after tonight, I‰Ûªve been waiting for a long time for a result like this so I‰Ûªm speechless to be honest,‰Û 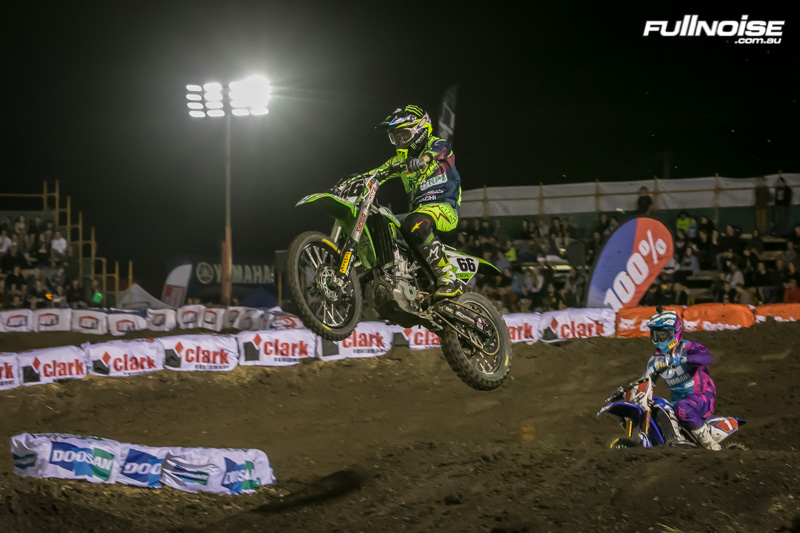 On debut aboard the 2017 model KX450F in Australia, Hahn put forward a consistent performance, taking third in his heat race before going on to round out the top five in the 20-lap main event.

Experienced American Hahn has set himself a base to work from in what was his return to competition after suffering multiple injuries earlier in the year, looking forward to upcoming rounds of the series.

"I had lots of nerves and wish I could have got a little more comfortable earlier, like how I felt about halfway through the main," Hahn said post-race. He also claimed second in the thrilling 'Dash for Cash' feature races.

"I just haven't raced in a long time, so these boys are in good shape, riding good, and I'm actually kind of pumped on this break because it gives me some time to work on some things and get a little stronger. It's exciting for me and I'm really happy with the bike and team."

Last year's championship runner-up Mosig crossed the line directly behind his new supercross teammate, also aboard the 2017 model KX450F, and bagged a strong haul of points toward his title challenge. He was fourth in his heat earlier in the evening.

"My starts were good in the heat and the final," Mosig reflected at the conclusion of round one. "I struggled a little bit in terms of pace, although it is close - I'm really happy with my fitness and bike set-up at this stage.

"I'll go back to the drawing board to try and find a little bit of extra speed, then hopefully fight for the podium at the next round. I'm really happy to get round one done and move forward to Toowoomba." 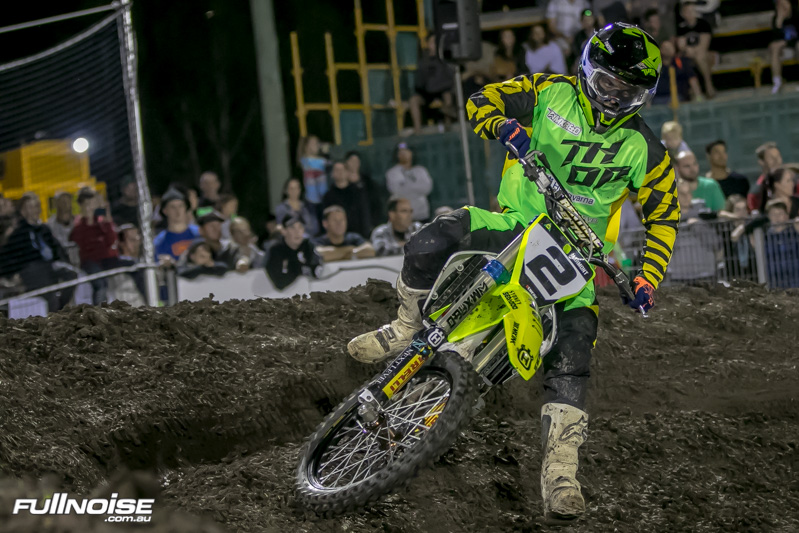 Multi-time Australian Motocross Champion Jay Marmont has kicked off his Supercross comeback with a hardfought eighth place at the Australian Supercross championship opener at Jimboomba, south of Brisbane.

Husqvarna FC450-mounted Marmont ran as high as fourth after the drop of the gate, but was hit by another rider and fell heavily.

Marmont recently announced his comeback for the 2016 supercross season, and proved he‰Ûªs lost none of his ability to punt a very fast four-stroke around a very challenging track.

After dusting himself off, the 2012 Australian Supercross Champion re-passed more than half the field as he surged forward to his eventual top-10 finish.

‰ÛÏIt was a good night, but the final wasn‰Ûªt good." Marmont commented. "I came together with Todd Waters in the whoops and it put me over the handlebars. It was a pretty big crash actually.

"I went from there, and came back through the pack - I was almost a lap down at the start but I just plugged away at it and came through and got up to eighth which was good points, and it was somewhere to start from. My speed was good, I just lacked a little bit of intensity, but this gives me a few things to go home and work on so I can come back a bit stronger at the next one, and keep plugging away at the championship.

"A bit more seat time will help, which I knew was going to be the case. The top eight in the 450s are pretty solid, so if I could have stayed up there and given them a run that would have been good. Next time.‰Û 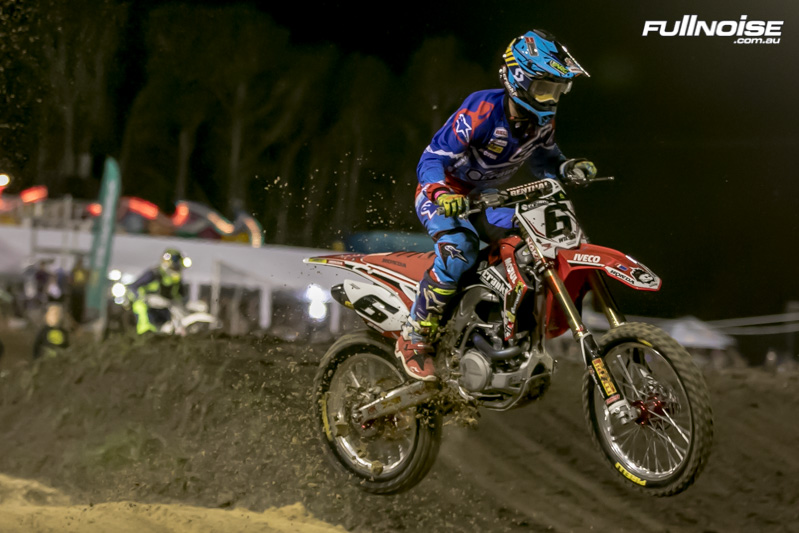 Crankt Protein Honda Racing Team‰Ûªs Jay Wilson made his career first debut in the talent packed SX1 class, lining up against some of the most experienced riders in the world at round one of the 2016 Australian Supercross Championship at Jimboomba on Saturday night.

Wilson, who has in fact not raced Supercross since he won the Under 19‰Ûªs Championship in 2013, dusted off the cobwebs and delivered promising results throughout qualifying, one heat race, and a 20 lap main event last night.

With thousands of spectators turning out to witness round one at Jimboomba, Wilson raced to an impressive fifth place in heat one. Then, despite being dead last through the first turn of the main event, Wilson clawed his way back to a hard fought ninth position, collecting valuable championship points for the Factory Honda team.

‰ÛÏWe knew round one was always going to be the most difficult with the tight turn around from Motocross, and if ninth is our worst result for the season, then we‰Ûªre in a good position to go forward in this championship,‰Û 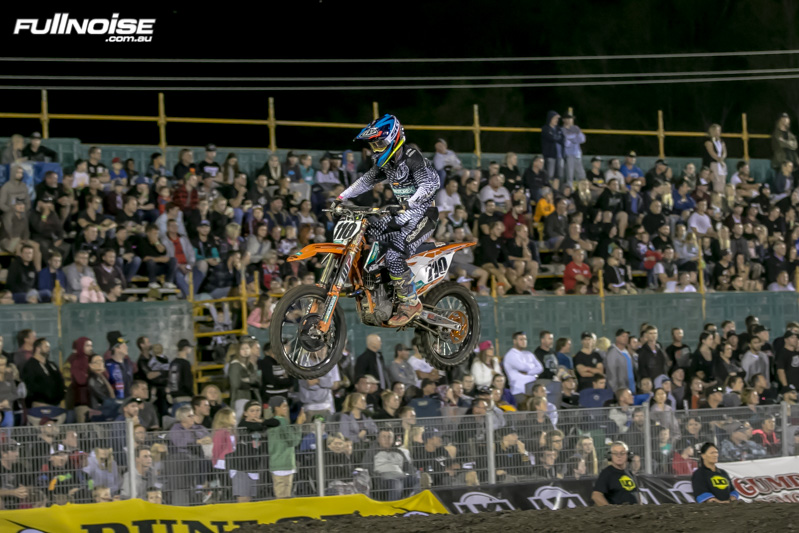 It was a hard day's night for the members of the KTM Motocross Racing Team as this year's Australian Supercross championship season kicked off at Jimboomba, south of Brisbane.

However, while recovering from a poor start and making his way back through the field, Peters made a small mistake and copped a big punishment, crashing out heavily just after the middle of the race, and sustaining a laceration to his wrist which required six stitches.

‰ÛÏThe first race of the season was a tough one for sure." Peters said. "Practice went really well, I qualified first, and coming into the night show I was running second in the heat race, but I ended up crashing and finishing seventh.

"In the main event I got an okay start and was coming through the pack, but ended up crashing and it was a pretty big one so that knocked me out of the race. I ended up going over the bars and something cut my hand, and I ended up having to get six stitches on the end of my palm. Overall it was a tough night but I definitely came out with some positives, and I know what I need to work on.‰Û