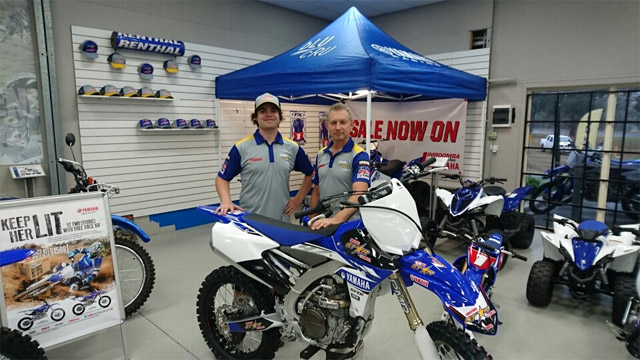 Local Jimboomba Yamaha dealership Star Yamaha have partnered with local gun rider Jacob Wright for at least the opening two rounds of the 2016 Australian Supercross Championship that fires into life next Saturday the 17th of September at Jimboomba.

Situated across the road from the venue that will host the opening round of the series, Star Yamaha is a family owned and operated business that has been headed up by Matthew Edwards. Edwards has owned and operated Yamaha dealerships for the past twenty one years, relocating and taking on the Jimboomba Yamaha dealership just over two years ago along with his wife, daughter and brother.

Edwards and his family have a rich history of supporting local riders and currently supports local coach Barry Surawski along with Motocross and Supercross icon from the hey day of the sport in Australia, Peter Melton.

When approached to help out Jacob Wright for the 2016 season, Edwards was more than happy to help give the talented rider a chance to compete in this years series.

"Scott Bannan approached us about helping out Jacob and we are happy that we were able to put something together to help out a local Queensland rider." Edwards said. "We have thrown out support behind Jacob for the opening two rounds to start with and will see how things are progressing from there."

"We also sponsor the opening round and will once again have a trade stall at the Jimboomba race. The events last year at the venue were very good and it is great to have a promoter that took the time to listen to us and take on board some of our ideas after those first events.

"We are looking forward to being back at the track next Saturday and watching Jacob in action on our Star Yamaha YZ450F."

For Jacob the opportunity comes as a great relive and he is more than happy to continue aboard Yamaha's YZ450F to kick off this years SX season.

"Im over the moon to be able to line up for supercross this year thanks to Star Yamaha" Wright told Fullnoise.com.au.

"Scott Bannan and my good mate Kade Mosig put some ideas together to get me at the first supercross before i even knew. Scott told me on Wednesday what he had put together and now we are here!

"Luckily enough Mathew at star yamaha has come on board with a brand new YZ450F and Scotty has me sorted out completely with a bike competitive ready to go which im very grateful for. Also Thor Australia and Spy have continued there support into supercross with gear and goggles.

"The plan is to race the first two races jimboomba and Toowoomba and see were we are at in the points! Im super grateful to be lining up" Wright concluded.