Sofuoglu takes the honours as Caricasulo and Jacobsen fight it out 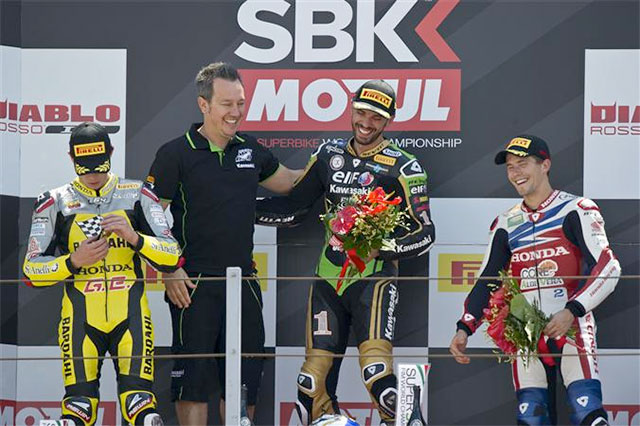 Reigning Champion Kenan Sofuoglu has taken another impressive win in 2016 at Misano World Circuit Marco Simoncelli, crossing the line ahead of Bardahl Evans Bros. Honda rookie Federico Caricasulo and Honda rider PJ Jacobsen after a three-way fight for the win.

Pole sitter Caricasulo took his second podium in his rookie year with the finish, just beating PJ Jacobsen to P2 despite the American having led for much of the Race.

Caricasulo didn‰Ûªt choke as he started from pole position for the first time in WorldSSP, with the Italian rookie getting away in the lead ahead of fellow front row starters Sofuoglu and Jacobsen. With a clean start then interrupted by a small incident later in lap 1 as Alessandro Zaccone began a chain reaction that saw MV Agusta Reparto Corse rider Jules Cluzel bumped out of the top ten as the Frenchman was forced to sit up, Zaccone got ahead of Randy Krummenacher in the early stages to circulate in P4 as the fastest rider in the FIM Europe Supersport Cup by some margin.

Just under half way through the Race saw Jacobsen take the lead for the first time, with the American pulling out a small margin on Caricasulo as the two started to gap reigning Champion Sofuoglu in P3. Lap 9 saw the winner in the last two WorldSSP Races at Misano ‰ÛÒ Jules Cluzel ‰ÛÒ tumble at Turn 6 and lose the chance of taking a third straight victory on the Adriatic as he fought to move back up the board after the Lap 1 incident. 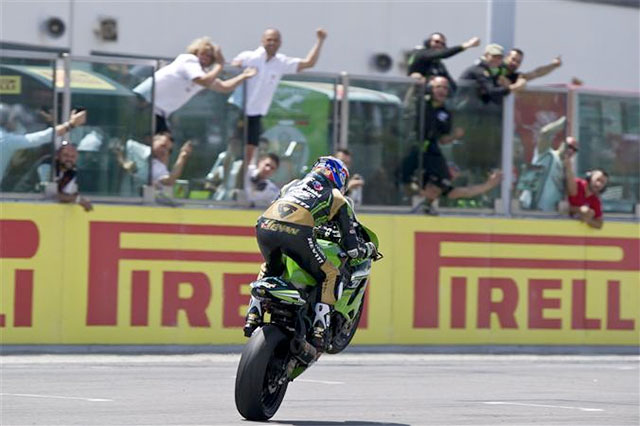 Kenan Sofuoglu took the win to extend his championship lead.
With Sofuoglu behind Caricasulo, the Italian rookie wasn‰Ûªt for giving up, passing the reigning Champion back and holding him behind for a number of laps before then running slightly wide with 4 laps to go and allowing the Turk past to try and chase down Jacobsen for the victory. Sofuoglu eventually pulled clear of both the American and Caricasulo to take a stunning win at a track that traditionally hasn‰Ûªt favoured the reigning Champion.

‰ÛÏThe warm-up session was very cold under the clouds and we decided at the last second to use a hard tyre. When we did this I was hoping everyone else would too," Sofuoglu explained. "But Jacobsen and Caricasulo chose the SC0. At the beginning of the race they just went away because that is almost a qualification tyre and capable of a much better lap time.

"I was surprised that all race long they were really constant. I just did not give up and I was sliding a lot. There was one moment where I thought, ‰Û÷What do I have to do? Do I accept third or not?‰Ûª Then I said to myself ‰Û÷no, no, no, keep pushing to the end.‰Ûª In the last two laps I saw the chance, I passed them both and we won the race. It was a very important win and I am very happy for the result.

"I have to say a big thanks to Kawasaki, Puccetti Racing and WP suspension. The worst track for me this year was going to be Misano, because we had a lot of chatter problems on this track before, but the new suspension definitely helped me to have no problem. The championship is not over yet and still I will go for wins. I need a couple of wins and then I can say it is OK - but not yet. There is still time to take wins and not just relax for the championship.‰Û 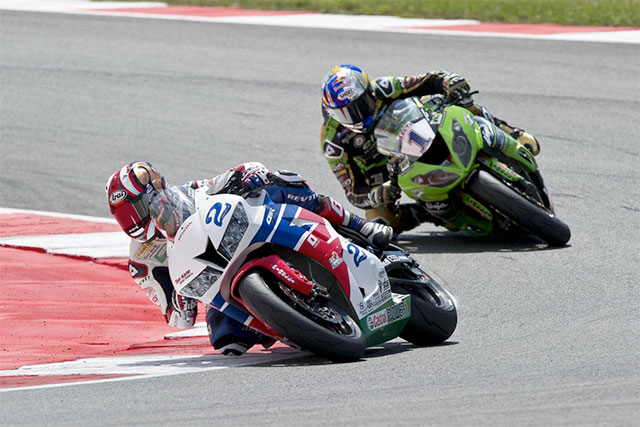 PJ Jacobsen lead most of the race but his tyres faded in the final laps. He hung on for third
Alessandro Zaccone, after a quick but aggressive start, then started to fall through the order before eventually being forced to pull into the pits with a technical problem. GRT Racing Team rider Gino Rea moved his way through the field to cross the line in an impressive P4 as fastest MV Agsuta, ahead of Randy Krummenacher who completed the top 5 after a difficult day at the office for the title contender.

Lorenzo Zanetti was sixth after a good comeback from a lower qualifying position for MV Agusta Reparto Corse at home, ahead of Alex Baldolini, and Axel Bassani for San Carlo Team Italia - who crossed the line as the fastest FIM Europe Supersport Cup rider. Luke Stapleford brought his Triumph home in P9 with a solid ride into the top ten, with CIA Landlord Insurance Honda rider Christoffer Bergman rounding it out in P10.

WorldSSP will now head into the summer ahead of their next time on track at Lausitzring in Germany, as the intermediate class don‰Ûªt travel to Laguna Seca for Round 9. With the title all to play for, the focus for the Supersport grid before Germany will undoubtedly remain on one thing: training.