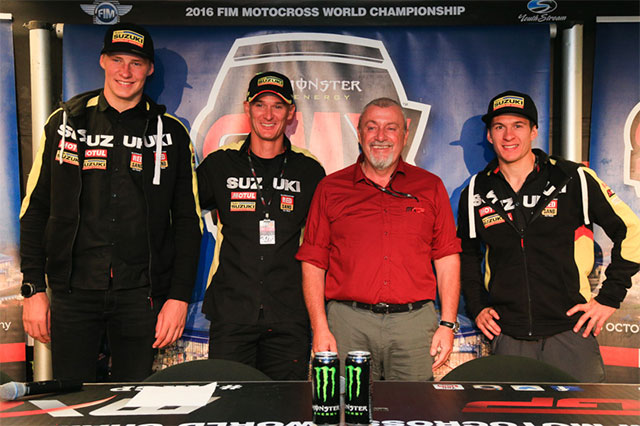 Following the Press Conference here at the MXGP of The Netherlands in Assen, Suzuki World MXGP‰Ûªs Team Owner, Stefan Everts, took the opportunity to announce Suzuki‰Ûªs line up of inspired riders that will compete for brand supremacy at the all new Monster Energy SMX Riders‰Ûª and Manufacturers‰Ûª Cup which will take place at the VELTINS-Arena, Gelsenkirchen, Germany on October 8th.

‰ÛÏI wanted to have a good young team, so the team will be Jeremy Seewer, the second rider will be Arminas, he is quite new on the team and in the world championship and our special guest will be not going to be from Europe, and unfortunately it‰Ûªs not going to be James Stewart, although we did try to make that happen but he got injured recently, but it will be Jake Weimer, the former Lites supercross champion.‰Û