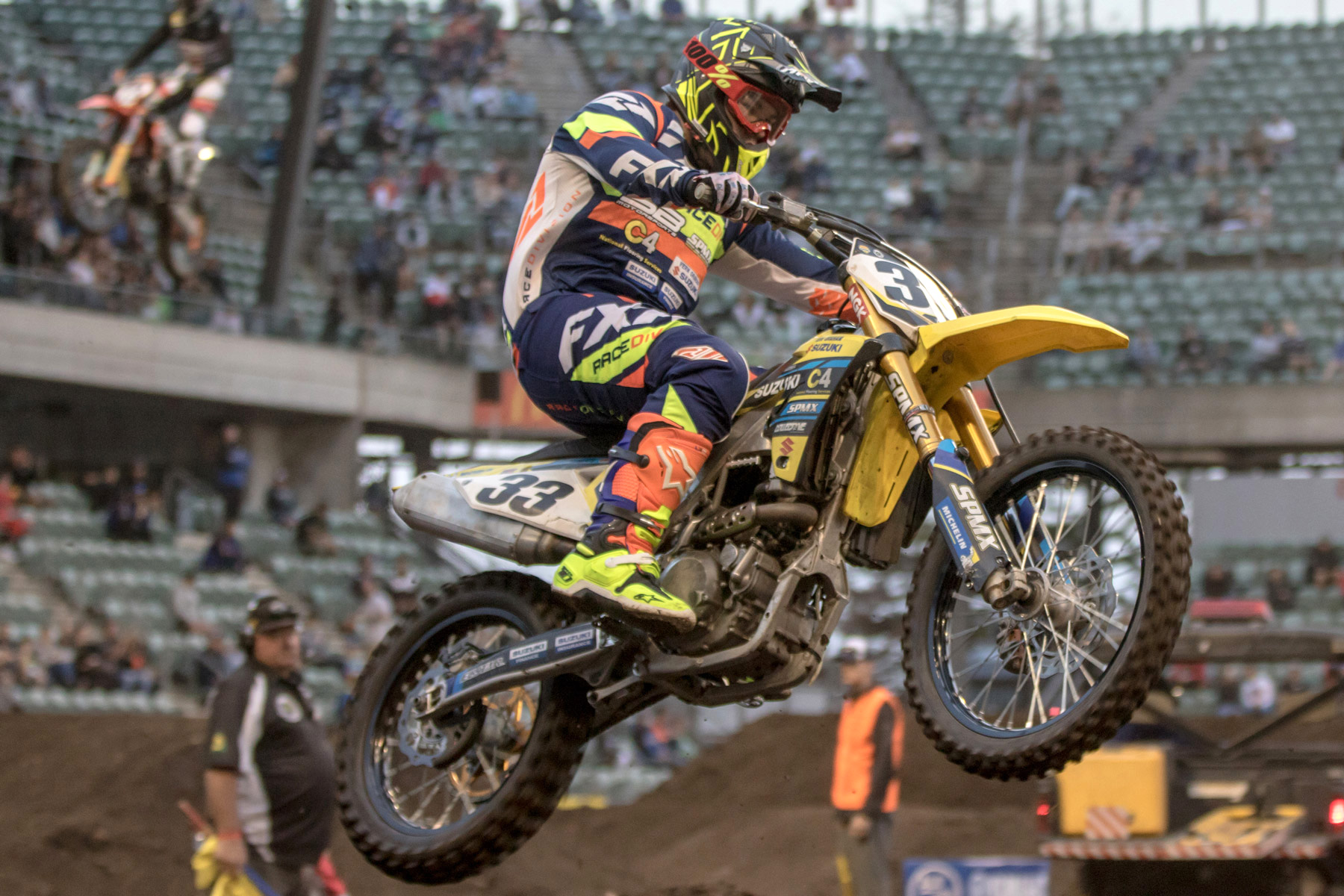 Cody Dyce had his best night of the season so far at round three. Photo: Aaryn Minerds
The SB Motorsports ECSTAR Suzuki team continued to make their presence felt at the third round of the 2019 Australian Supercross Championship held at Win Stadium in Wollongong, NSW on Saturday the 9th of November with another top ten performance, this time by Cody Dyce.

After showing some good speed throughout qualifying and practice sessions at the opening two rounds, Dyce was able to transfer that speed when it counted at round three producing the form he is truly capable of.

Lunching out of the gate in the second SX1 heat race of the night, Dyce showed that his Suzuki RM-Z450 was a bike to be reckoned with, grabbing the holeshot and leading the field through the opening lap.

With some of the world‰Ûªs best Supercross riders breathing down his neck the 19-year-old held firm, maintaining the race lead for near on three laps before playing it safe, ensuring a direct transfer out of his heat into the night's main event crossing the line in 5th position.

With riders facing the Triple Challenge Final Format, Dyce got off to a solid start posting a respectable 8th place finish in the opening final.

Dyce once again showed he is a talent to keep an eye on in the second final, getting out of the gate to another great start and rounded the second turn in third position.

Sliding back to fourth the rider hailing from Sale, Victoria held his nerve and his speed and with a little luck supplementing his hard work, was able to move back into third position in the final lap and a half, going on to cross the line for a fantastic podium result.

A small mistake early in the final race left Dyce to round out the evening with a 14th position finish in the last final. Still, his overall effort was enough to secure and superb 7th place result overall for the round.

‰ÛÏI am pumped on the result from this round; I really could not believe I was heading into the whoops for the first time leading the field in my heat race, I didn‰Ûªt really know what to think, I was just pumped and went with it," Dyce said.

‰ÛÏThe second lap around I was thinking to myself what is going on, I was expecting Brayton to blow by me in the whoops, I was going in there committed, but was just waiting for him to go by, but he didn‰Ûªt.

‰ÛÏI think on about lap three I started to tighten up a little and rode it home smart to make sure I made the final, but it was a great feeling to lead a race again, it has been a while, and the guys in this class are no joke, they are the best out there.

‰ÛÏI think leading the heat race helped me when I was up near the front again in that second final, I was not waiting for them to come by this time, I knew I could hold that pace.‰Û 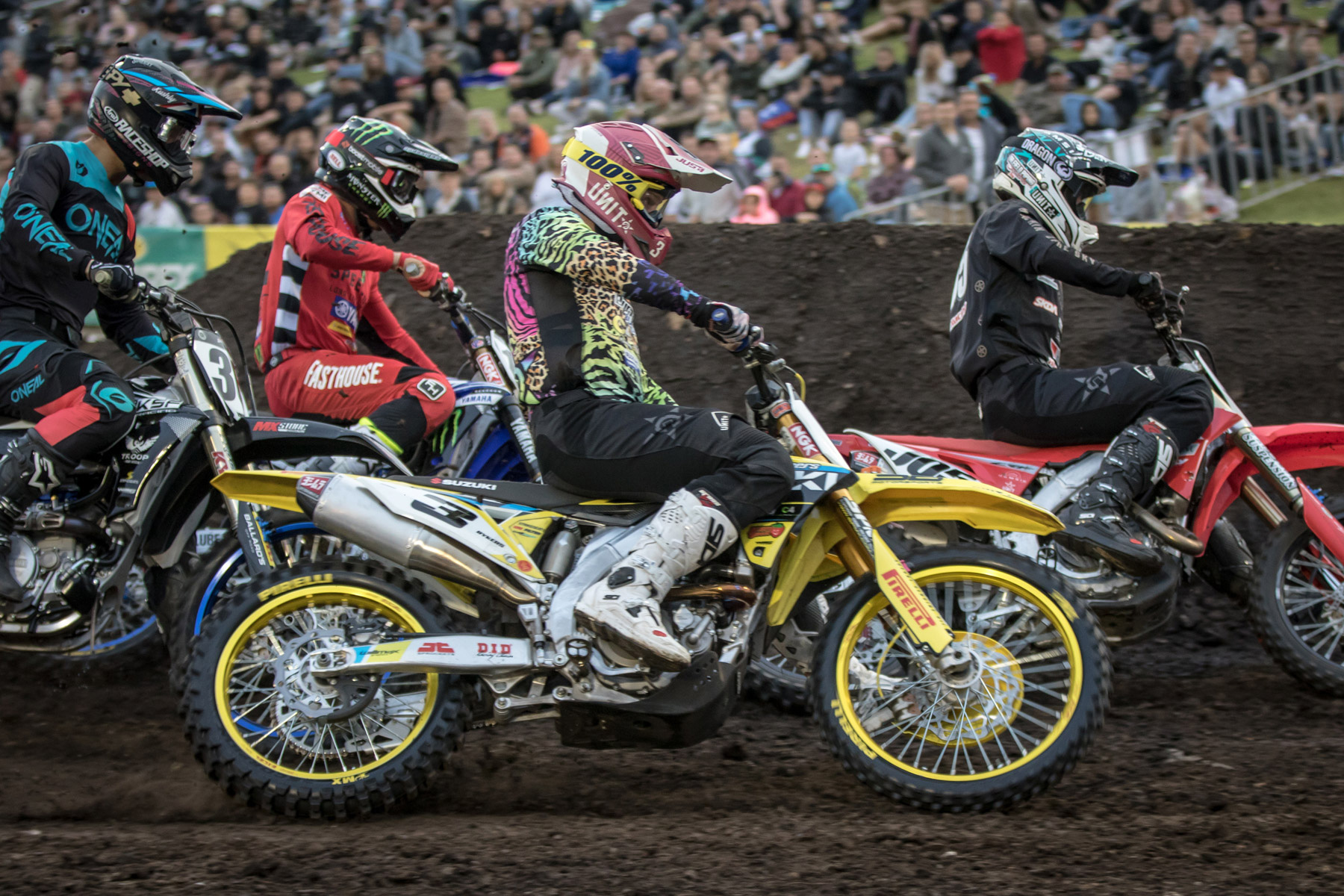 Jayden Rykers. Photo: Aaryn Minerds
Jayden Rykers much like Dyce started his night off in great fashion, jumping out of the gates well in his heat race and quickly settled into 4th position, peeling off consistent lap times and held 4th place all the way to the finish.

The West Aussie started the three-race final format with a reliable top ten result, then followed up with a 14th and 16th place finish in the remaining two finals to end the night in 13th position overall.

While it was not precisely the night he was chasing after his heat race result; he was once again happy to make it through the round and head to the final two big races in Auckland and Melbourne sitting in 9th in the series.

‰ÛÏI was happy with how I was riding in that heat race; I felt comfortable on the track and hitting everything and just enjoying racing up the front.‰Û 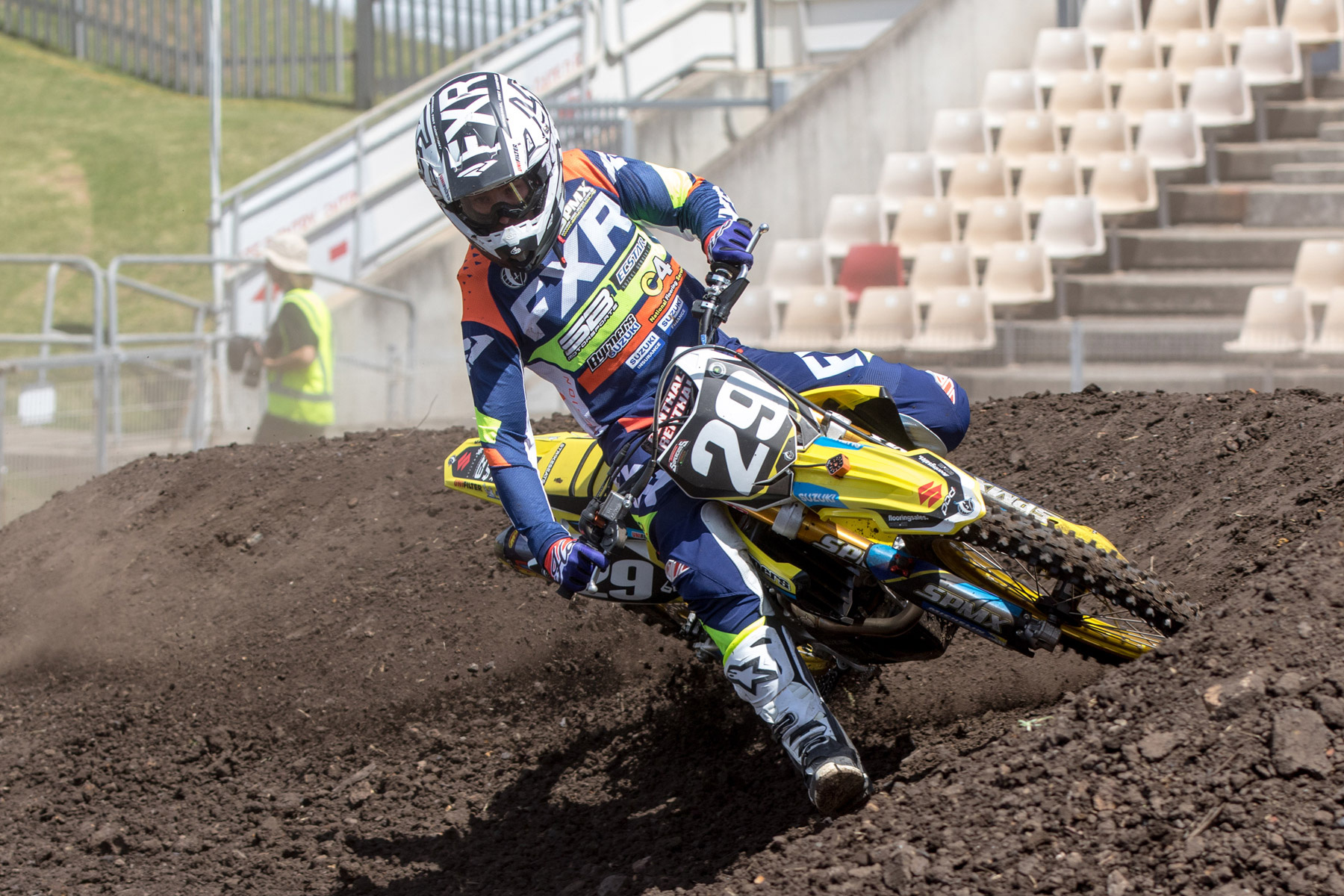 A nasty crash through the whoops saw Josh Brewster heading to the local Hospital, the young Victorian was flown to Sydney and placed into the ICU ward and monitored overnight. Photo: Aaryn Minerds
While the night was another positive one for the SB Motorsports SX1 racers, the teams SX2 rider Josh Brewster had his day cut short after a nasty crash through the whoops in the early stages of qualifying.

After heading to the local Hospital, the young Victorian was flown to Sydney and placed into the ICU ward and monitored overnight.

Suffering broken Ribs and internal injuries, Josh is on the mend with Doctors happy with his early progress; however, he will remain in ICU for a little longer for further evaluation and monitoring.

The team will now head to Auckland this weekend for the opening SX-Open Supercross event, thanks to the assistance of Suzuki New Zealand along with Motocross legend and 2005 MX Nationals champion Darryl Hurley who now runs his own Suzuki Dealership. 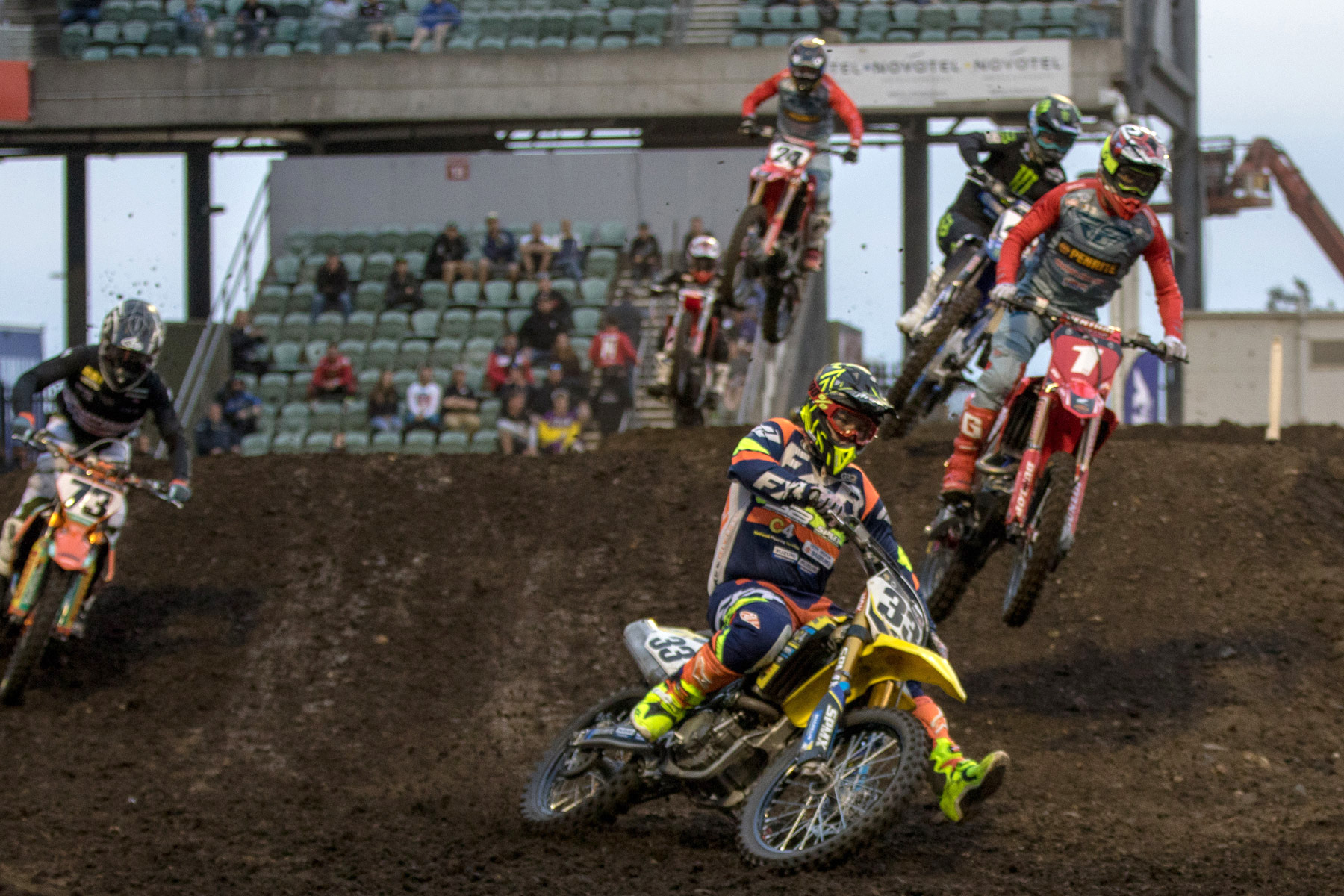 Cody Dyce was in the thick of the SX1 action all night, even leading Australia's best at stages. Photo: Aaryn Minerds