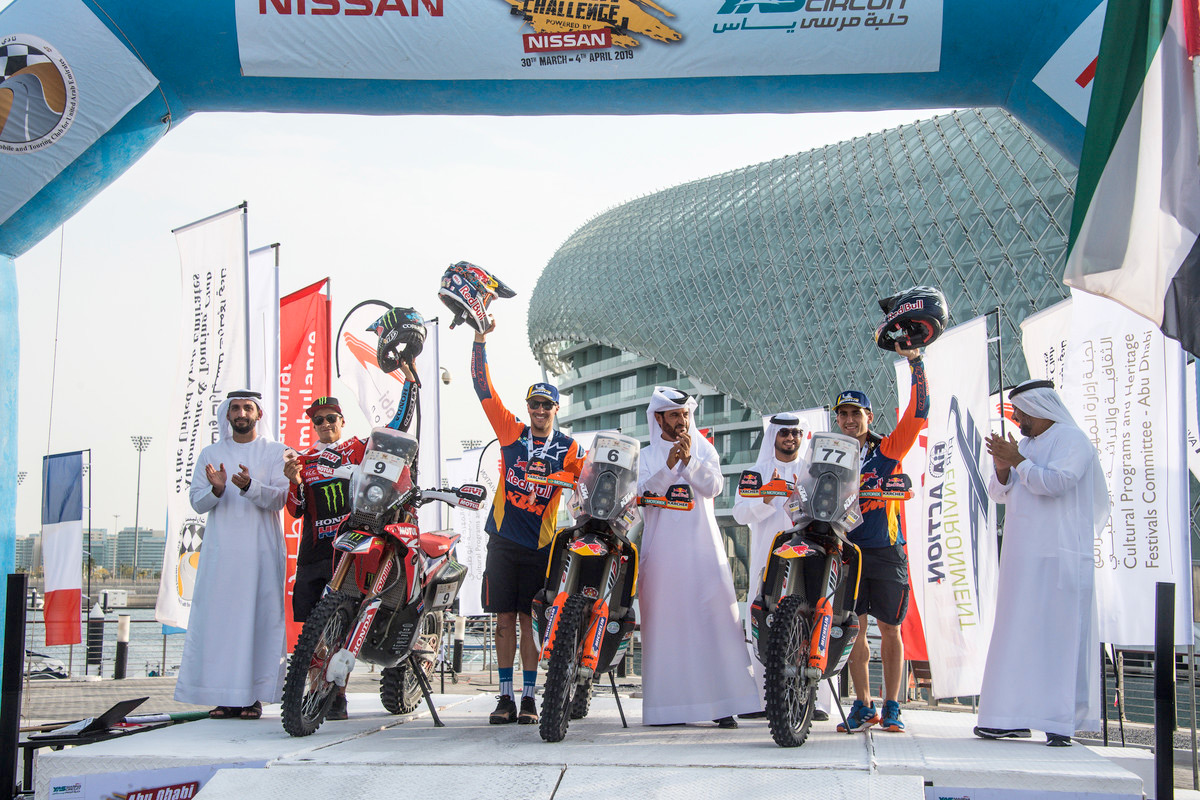 The fifth day of racing in the United Arab Emirates dawned bright for the riders as they left the Liwa bivouac and set off for the final timed special of the event. The stage wound its way north for a total of 351.96 kilometres, with a 214.47-kilometre special testing the riders before the finish at the famous Yas Marina Circuit. 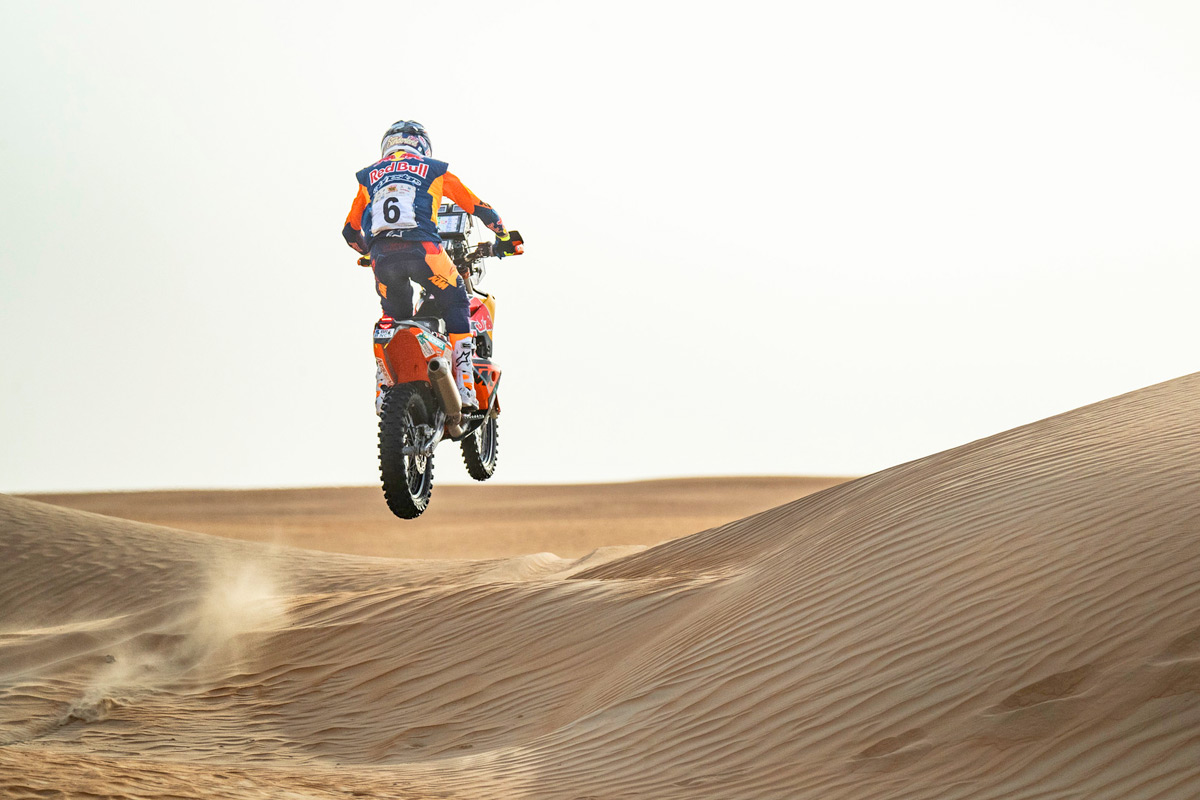 Sam Sunderland won the final stage by an impressive three-minutes-and-26-seconds from his teammate Luciano Benavides to secure the Rally win. Photo: RallyZone - Edoardo Bauer
The Abu Dhabi Desert Challenge has been an outstanding event for Sunderland. Working closely with his KTM team, the British rider secured his second victory at the race by implementing the perfect strategy over the course of the five-day event. Leading the overall standings by a narrow 18 seconds over the second-placed rider Cornejo coming into today‰Ûªs final stage, Sunderland knew he would have to push right from the start to guarantee a win.

The timed special consisted of the large iconic sand dunes of the Liwa Desert, in the first half of the stage, before flattening out into faster pistes as the route neared the city of Abu Dhabi. Successfully maintaining a strong pace over the first 100 kilometres, Sunderland caught and passed a number of riders ahead of him and made up valuable minutes on his nearest rivals. Arriving at the finish, Sam won the stage by an impressive three-minutes-and-26-seconds from his teammate Benavides and in turn claimed the rally victory by over eight minutes.

‰ÛÏThings went perfectly today," Sunderland said. "We knew coming into today‰Ûªs final stage that we would have to stick to our planned strategy. The stage brought us closer to Abu Dhabi and as such, the tracks towards the end were a lot faster away from the dunes. I knew I would have to push really hard right from the start of the special. I arrived at the refuelling and the team let me know everything was good, so from there it was just a case of bringing it home safely to the finish. I‰Ûªm really happy with the job done by the team all week and myself in the way I rode. It‰Ûªs great to get my 2019 championship off to the perfect start with a win.‰Û 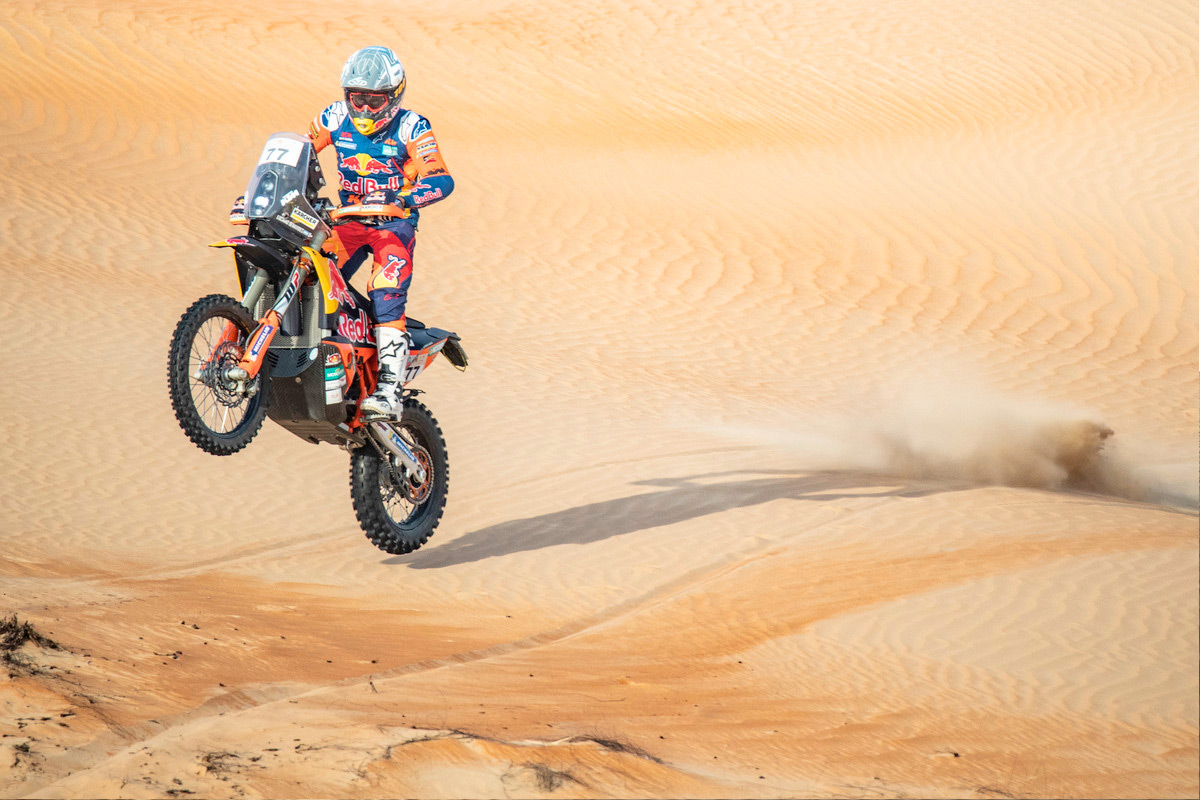 Luciano Benavides rode the perfect final special to secure the overall second place behind his teammate Sam Sunderland. Photo: RallyZone - Edoardo Bauer
With both his speed and confidence improving, Luciano Benavides topped his already superb event performance with a runner-up finish on the final rally stage. Coming into day five with over four minutes to make up on the then second-placed rider Cornejo, the 23-year-old Argentinian knew he would have to ride the perfect special to secure the overall second place behind his teammate. Feeling good on the bike and pushing hard right from the flag, Benavides not only made up the minutes required but claimed the overall runner-up position with an advantage of close to two minutes. The result marks Benavides‰Ûª maiden podium in an FIM Cross-Country Rallies event.

‰ÛÏIt‰Ûªs been an incredible day for me," Benavides said. "I knew I had to push a lot to make up the difference to the guys in front, gain some minutes and take second place. I tried my best to go fast, but stay on the bike and not go too crazy. The bike was feeling super-good so I decided to attack and it worked out, I got second place and the team got the first two places. I am really happy and now it‰Ûªs time to celebrate.‰Û 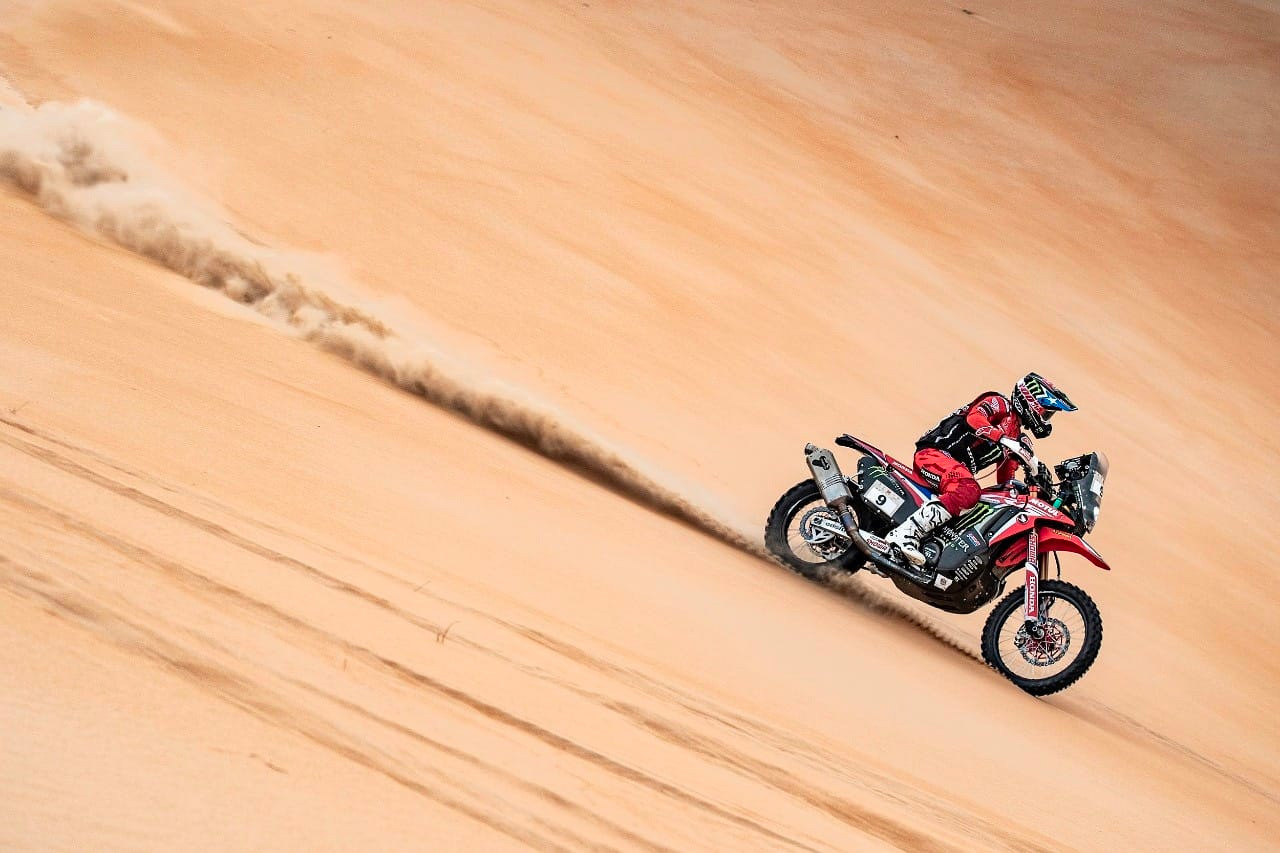 "Today was a difficult day, opening the track; I am happy," Cornejo said. "I opened the track from beginning to end although unfortunately they took back a lot of time from me and I ended up in third position in the general. I am equally happy to get my first podium in the world championship, to go home after having won two stages and having opened the track during two more stages. Certainly this experience will be positive for my future. We are on the right track. I'm happy with my riding, and I‰Ûªm picking up more and more pace. I want to thank the Monster Energy Honda Team for all the hard work these days, as well as my coach and my family who are at home supporting me. Thank you very much to all." 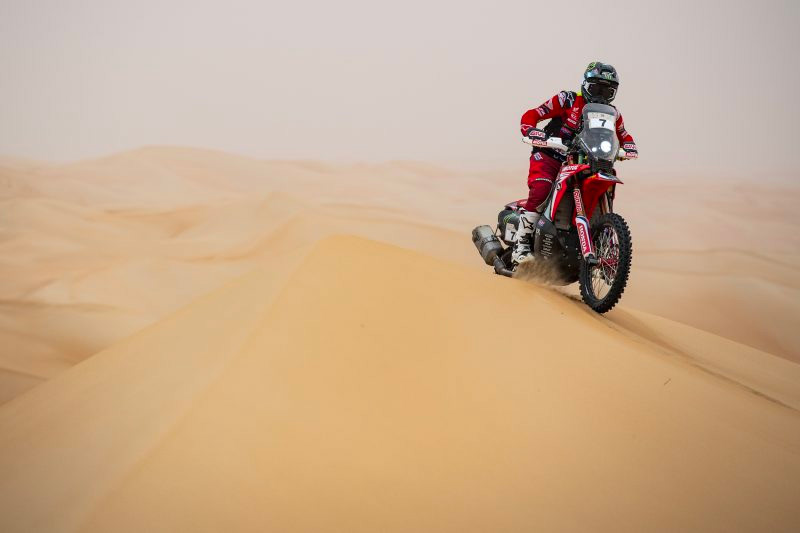 Monster Energy Honda's Kevin Benavides finished fourth despite riding with multiple injuries. Photo: RallyZone - Edoardo Bauer
Monster Energy Honda team-mate, Kevin Benavides, finished behind Cornejo, both in the day‰Ûªs stage ‰ÛÒ posting fifth ‰ÛÒ as well as in the overall final standings where he has occupied fourth place. For the rider from Salta it was a triumph of sorts, to be able to finish the race in the top five, while burdened with a recent shoulder dislocation and a fractured rib.

"I'm happy to finish because the goal was to reach the end," the Argentinian said. "It was a very hard week physically. It was not easy to ride with a dislocated shoulder and a broken rib. I was at 50%, but I gave 100% of that 50, and it's very good to be able to finish with a fourth place. Every sacrifice has its reward and we must bear in mind that this championship is very long and we hope it will have a good ending." 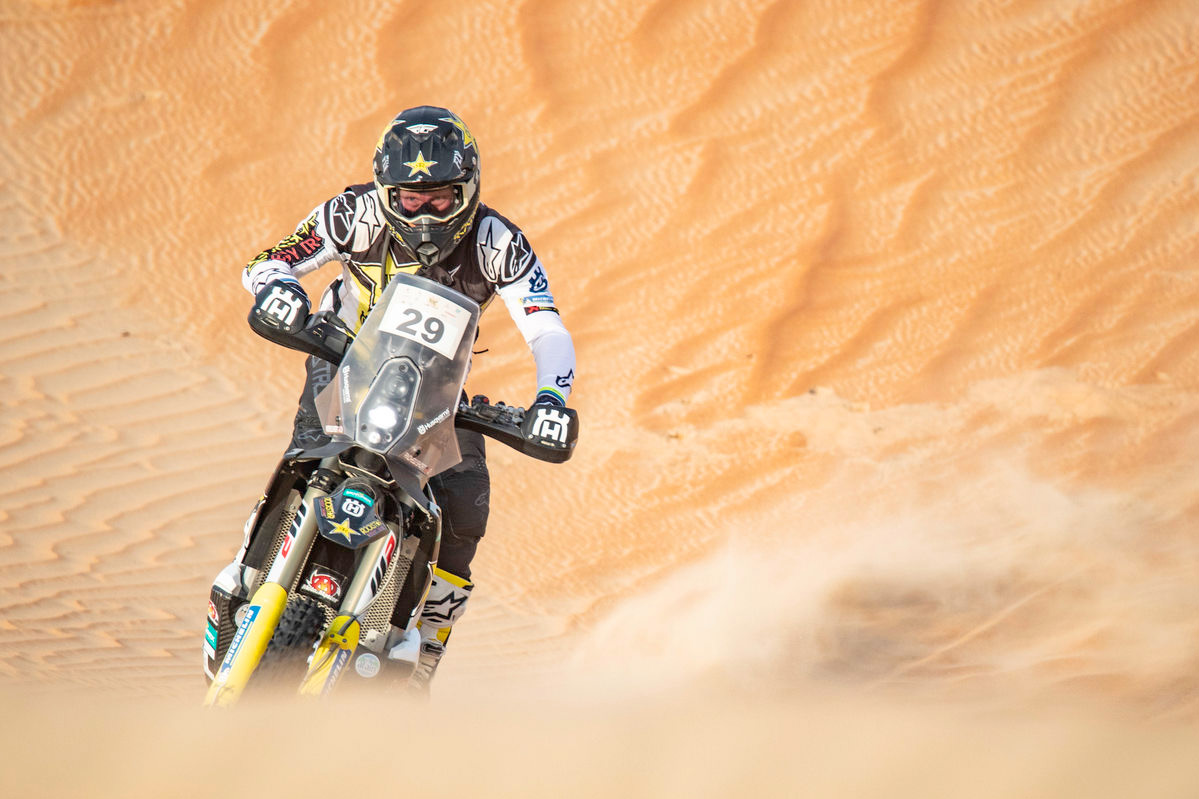 ‰ÛÏThis last day has been good for me, I felt really good all day and had a good pace," Short said. "Just near the end I had a small issue but I was able to quickly get going again and complete the stage. Overall, I have really enjoyed the race here in Abu Dhabi, it‰Ûªs been a great experience and fun to be here with the crew. I feel my riding has improved here, each rally I do it feels like I move up another level and it‰Ûªs very important to keep that momentum going. Real race experience is so valuable and it‰Ûªs good to leave here healthy and even faster. Admittedly, it‰Ûªs not quite the result I was hoping for but we had to play the cards we were dealt and I think we handled it perfectly. I‰Ûªm now really looking forward to the next race.‰Û