Rossi Looking For More Than The Maximum For Home Race 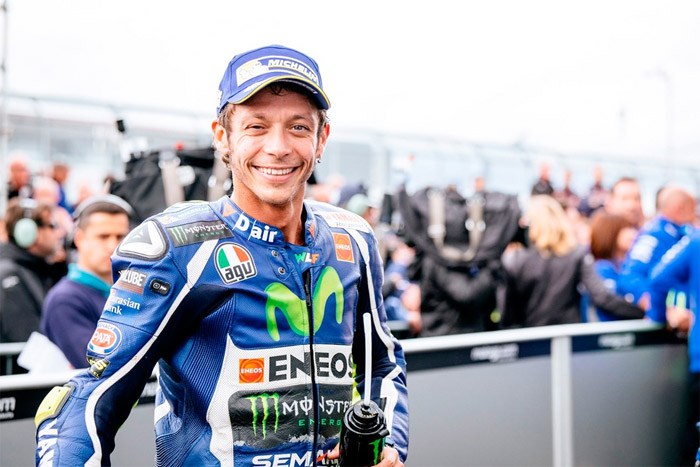 Just a few days after the British Grand Prix, the Movistar Yamaha MotoGP team, being based in Germo di Lesmo, Italy, looks forward to starting round 13 of the MotoGP World Championship, which can be considered their second home race of the season.

Nine-time World Champion Valentino Rossi ended a challenging weekend at the Silverstone Circuit on a high last Sunday, securing a hard-fought third place. He arrives at his home GP fresh from the podium, re-energised by the close racing and more eager than ever to narrow the 50 points gap to the championship leader in the overall standings.

The Doctor can expect a lot of support from the many members of the Valentino Rossi Fan Club that traditionally parade from Rossi's home in Tavullia to the Misano track along a 14km route. The local hero hopes to greet a sea of yellow from atop the rostrum again this weekend. He has stood on the podium in Misano several times, scoring three MotoGP victories, in 2008, 2009 and 2014, a second place in 2012 and a third place in 2010.

"Next week at Misano will be the most special weekend of the season, because Misano is "my race", it's my home. Usually we are quite good there, so we hope to be competitive." Rossi enthused.

"There will be a great atmosphere: a lot of fans, a lot of people around and also a lot of pressure, so we have to try to give 20% more than the maximum!"

Teammate Jorge Lorenzo moves on from a challenging British Grand Prix by arriving at one of his most successful circuits on the MotoGP calendar. Until 2015 he secured a place on the podium every year since the track was added to the MotoGP calendar in 2007. He has three wins in the premier class at this circuit, in 2011, 2012 and 2013, and has taken four second-place finishes in 2008, 2009, 2010 and 2014. He also won the 250cc race at the Misano track in 2007.

With a 64 points gap to the championship leader and 14 points between him and his teammate, the Mallorcan is determined to hit the ground running on Friday in the first free practice sessions. He hopes to return to the Misano podium this year to bounce-back from last year's maniacal dash that saw the field come into the pits twice in one race to switch tyres.

The Misano track was constructed in 1972 and is ridden clockwise since a radical renovation was done to meet MotoGP's safety regulations in 2007. During the upgrade a new chicane was added, giving the 4.2 km track its current lay-out of six left and ten right corners and a 530 m longest straight. These improvements not only made the track safer, but also increase the race excitement as the numerous fast corners provide many overtaking possibilities, making the circuit one of the riders' favourites.