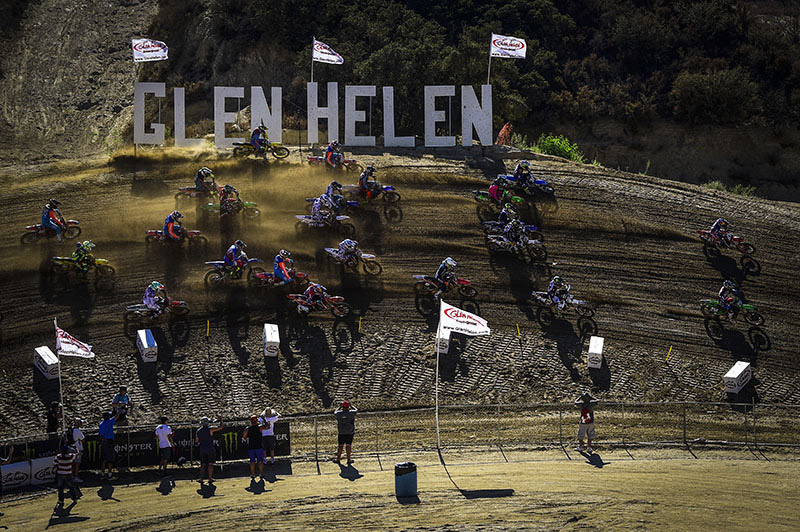 American‰Ûªs are renowned for their ‰Û÷bigger is better‰Ûª mantra, which is perhaps why Glen Helen Raceway, the venue that initiated the final round of the FIM Motocross World Championship, is referred to as the gnarliest track in the world with it‰Ûªs insanely fast start straight, super wide banked first turn, brutal uphill climbs, and super steep down hills. It‰Ûªs like no other, and combined with some pretty intense heat, it sees the riders faced with an all-new challenge.

While he wasn‰Ûªt the fastest guy all day, Monster Energy Yamaha Factory Racing‰Ûªs Romain Febvre grabbed a gear in the Qualifying Race and led every single lap to go pole for the first time this year, while Red Bull KTM Factory Racing‰Ûªs Jeffrey Herlings had to shake off the young American rookie, Monster Energy Kawasaki‰Ûªs Austin Forkner, to win the last Qualifying Race he‰Ûªll ever enter in MX2.

Watching thirty-five high performance dirt bikes manned by the most talented riders in the world haul butt around the impressive Talladega first turn here at Glen Helen Raceway is nothing short of epic.

Monster Energy Yamaha Factory Racing‰Ûªs Jeremy Van Horebeek topped the charts in both practice sessions, but when it counted he was nudged out of the limelight by his teammate Romain Febvre, who made it clear he wanted to be kingpin in the blue box. Febvre, last year‰Ûªs MXGP world champion, took the holeshot and controlled the race from start to finish for his first Qualifying Race win of the season.

Although Febvre hadn‰Ûªt won a qualifier this year, seeing him win wasn‰Ûªt the biggest surprise of the day. What was more surprising was the performances of Rockstar Energy Husqvarna Factory Racing‰Ûªs Max Nagl and Red Bull KTM Factory Racing‰Ûªs Dean Wilson who rounded out the top three despite the fact they struggled in the practice sessions, and only went to the gate fourteenth and fifteenth as a result.

Adding more ‰Û÷surprise‰Ûª factor to the Qualifying Race, was watching Red Bull KTM Factory Racing‰Ûªs Antonio Cairoli cartwheel down the start straight, while the newly crowned champ Honda Gariboldi‰Ûªs Tim Gajser got cross rutted on the first jump and spammed himself too. Cairoli managed to carve his way back to eleventh, while Gajser got back to fourteenth. In addition, Monster Energy Kawasaki‰Ûªs Eli Tomac was lucky to be inside the top twenty coming out of turn one. His sleepiness probably did everyone else a favor though; because once he had woken up he rode like a man possessed to finish an incredible sixth.

Monster Energy Kawasaki‰Ûªs Arnaud Tonus has been racing a 250cc all year, but rolled out on a 450cc this weekend to prepare for the Monster Energy FIM Motocross of Nations where he will represent Team Switzerland at the end of the month. Considering it was his first ride on the bigger beast, his pace was fierce and he sat fourth for most of the race before fading back to ninth in the last three laps. Instead, Tonus‰Ûª Team Switzerland teammate Kemea Yamaha‰Ûªs Valentin Guillod took the torch and rode an amazing race to finish fourth ahead of Team Suzuki World MXGP‰Ûªs Kevin Strijbos.

The champ, Herlings, didn‰Ûªt waste any time in taking it to the two American‰Ûªs and passed them both with ease on the opening lap. Although Herlings usually takes the lead and checks out, it doesn‰Ûªt appear to be that easy on this side of the Atlantic as Forkner flew up the inside of him to reclaim the lead on lap four. While Forkner gave the trackside fans something to smile about, Covington let some air out of their balloons when he crashed on the downside of the IPONE hip jump.

Meanwhile Herlings hounded Forkner and on lap seven, he put a classic pass on the Kawasaki ace when he pulled up on the outside of him, hit the pix, squared up, and made the move stick by going up the inside and squeezing him into the next turn. Forkner was thrown off by the move and took a lap or two to regroup, which allowed Geico Honda‰Ûªs Jeremy Martin to close in.

In the final two laps there were two major battles. One was between the American‰Ûªs, Forkner and Martin, who were scrapping over second, while Rockstar Energy Husqvarna‰Ûªs Max Anstie was challenged by Troy Lee Designs Red Bull KTM‰Ûªs Josh Hill for fourth. Both high-speed chases were intriguing, but at the flag, no passes had been made. Herlings made his final Qualifying Race in MX2 one to remember with an emphatic win, while Forkner held off Martin for second. Anstie managed to keep a white knuckled grip on fourth with Hill rounding out the top five.