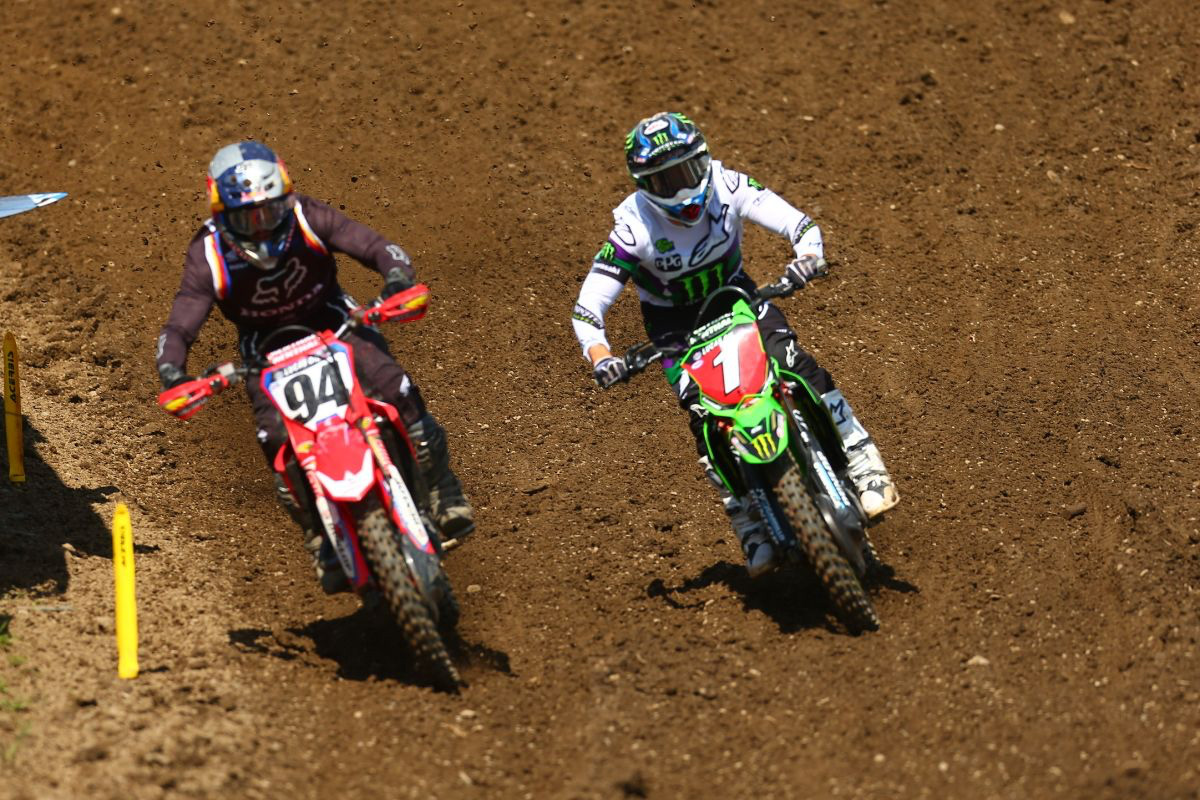 Roczen was dominant both motos en route to his third win of the season. - Photo: Jeff Kardas
The Lucas Oil Pro Motocross Championship, sanctioned by AMA Pro Racing, made its return to racing following its final break of the season for its 10th round of the 2019 season, with the 34th running of the Circle K Unadilla National from Unadilla MX Park.

Team HRC Honda‰Ûªs Ken Roczen swept the 450 Class at Unadilla to take his third win of the season. In the 250 Class, Monster Energy/Star/Yamaha Racing‰Ûªs Dylan Ferrandis captured his second consecutive victory, giving him three wins on the season.

German Ken Roczen started the race on a tear as he blasted through the field and muscled his way by Tomac to lead the opening lap. Red Bull KTM Factory Racing‰Ûªs Marvin Musquin was credited in third, followed by Bogle and Osborne.


Roczen quickly sprinted out to a multi-second lead in the opening laps, while Tomac continued to give chase in second. As the race closed in on the halfway point of the 30-minute-plus-two-lap moto, Roczen extended his lead to more than 10 seconds, while Musquin started applying heavy pressure on Tomac. Shortly after, Musquin used a strong drive on an uphill to pull alongside Tomac and make the pass stick for second.

With Roczen holding a commanding lead out front over Musquin, the battle began to heat up for the final podium position as Monster Energy/Yamaha Factory Racing‰Ûªs Justin Barcia was searching for a way around Tomac. On Lap 10, Barcia took control of second, bumping Tomac outside of the top three.

At the finish it was Roczen taking his fourth moto win of the season with 15.2 seconds to spare on the runner-up Musquin. Barcia completed the podium to take his first podium result of the season, while Tomac dropped to seventh after leading early. 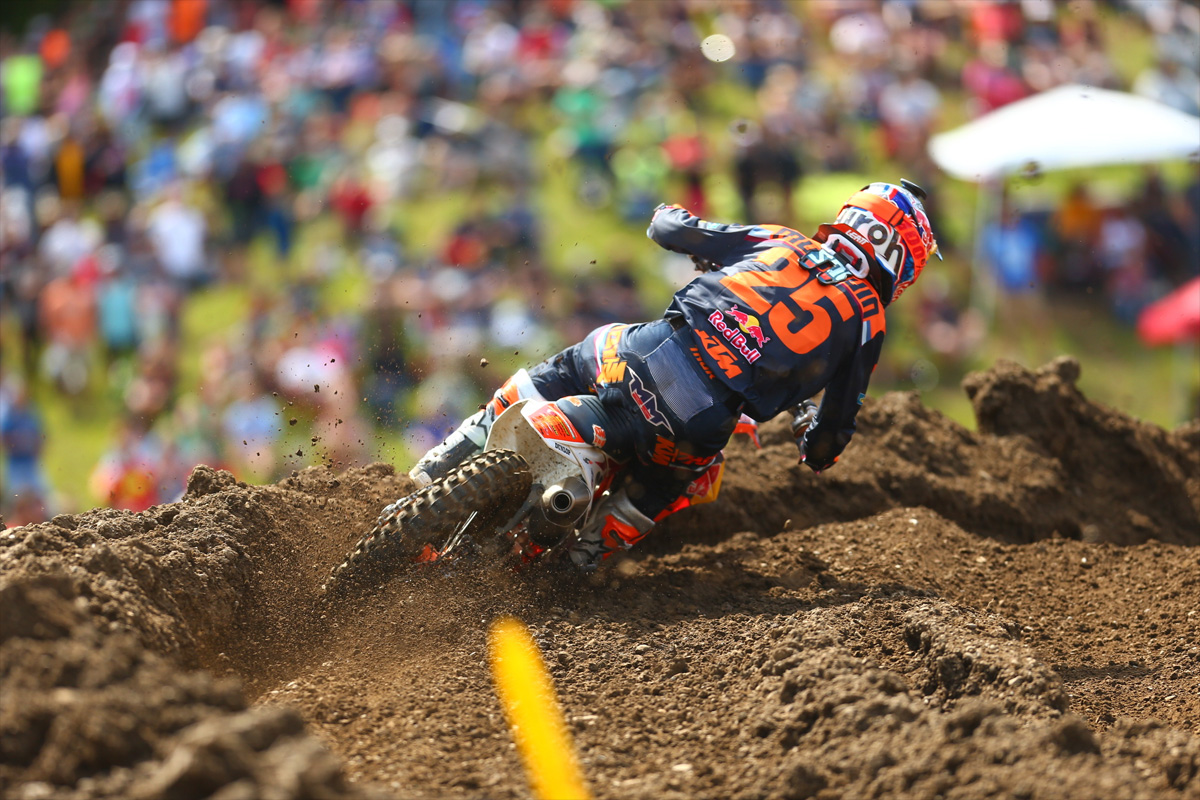 Musquin was in the hunt early and finished second best in class. Photo: Rich Shepherd
As the 450 Class field exited the first turn to start Moto 2 it was Musquin emerging with his third Motosport.com Holeshot of 2019, narrowly edging out Osborne and Barcia. In an attempt to get himself to the front quickly, Barcia lost the front end in a high speed sweeping turn, losing valuable positions. At the completion of the opening lap Musquin led the way with Osborne and Roczen in hot pursuit.

With a clear track advantage, Musquin pushed hard to try and distance himself from the riders behind him, however, first moto winner Roczen made the move on Osborne to takeover second and would soon find himself hot on the heels of Musquin. On Lap 3, Roczen grabbed a handful of throttle and launched into the lead. Musquin quickly reacted in an attempt to strike back, but Roczen held on to the top spot.

Similar to the first moto, Roczen‰Ûªs impressive efforts out front continued as he once again built a commanding lead, taking his fifth moto win of the season by 22.4 seconds over Musquin. A late race charge by Tomac allowed him to make the move on Osborne and take the final step of the podium in third.

Roczen secured his 18th career victory via 1-1 moto scores. Musquin‰Ûªs consistent riding carried him to second overall (2-2), just ahead of Osborne in third (4-4). 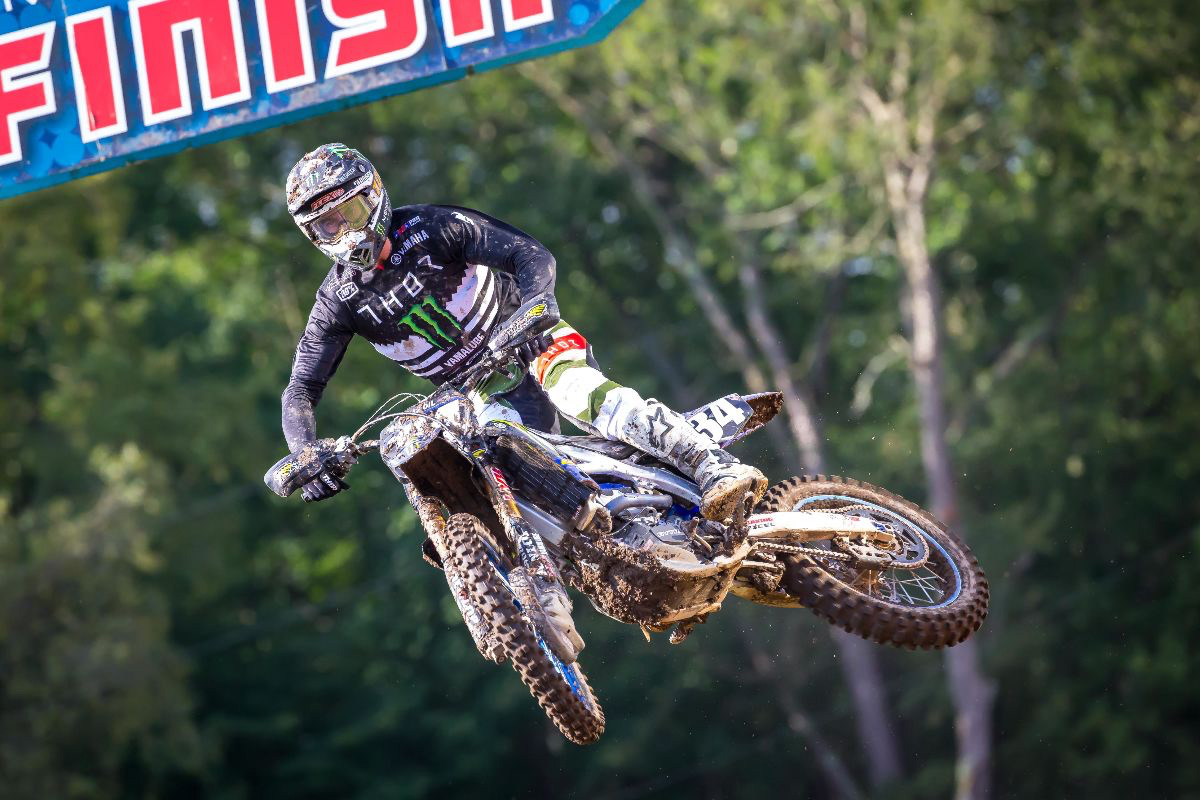 Ferrandis claimed his third overall win of the 2019 season. Photo: Rich Shepherd
The opening 250 Class moto of the afternoon saw Monster Energy/Star/Yamaha Racing‰Ûªs Justin Cooper emerge with his class-leading seventh Motosport.com Holeshot of the season ahead of Monster Energy/Pro Circuit/Kawasaki‰Ûªs Adam Cianciarulo and FCC/Signation privateer Jerry Robin. As Cooper quickly set the pace out front with Cianciarulo in tow, Ferrandis began to make moves and overtook Robin before the completion of the opening lap.

Cianciarulo applied heavy pressure on Cooper in the early minutes of the moto, but Cooper was able to respond and open a small cushion. Ferrandis, who started just outside of the top three, began to inch up on the front-runners and had his sights set on the lead group. A mistake by Cooper through the rollers on Lap 5 sent him to the ground, surrendering the lead to Cianciarulo. Cooper picked himself up to remount in fourth position, just behind GEICO Honda‰Ûªs Chase Sexton.

Once in the lead, Cianciarulo used a clear track to consistently click off laps, maintaining a slight advantage over his championship rival Ferrandis. When the checkered flag waved, it was Cianciarulo who held on to take his seventh moto victory of the season by 3.6 seconds over Ferrandis. Behind the lead duo, Sexton claimed his third moto podium finish of the season, followed by Cooper.

For Australia's Jett Lawrence in his first Pro Motocross race, things started off well running just outside the top ten early in the moto. A crash left the Amsoil Honda rider back in last position on track, however a sprited ride saw him power his Honda CR250F to 21st position, missing a points paying position by a single spot. 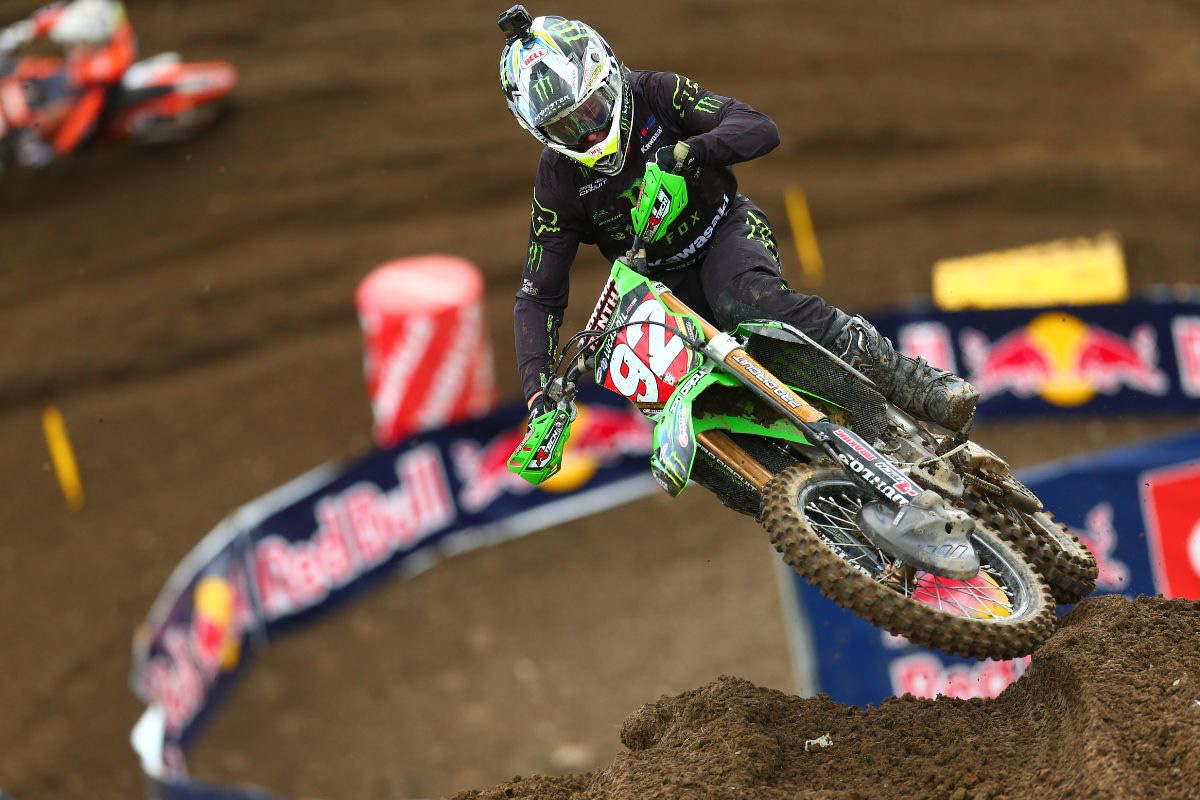 Cianciarulo was second on the day and maintains a 28 point lead. - Photo: Jeff Kardas
The deciding 250 Class moto once again saw a Star Yamaha lead the field through the first turn as Ferrandis earned his first Motosport.com Holeshot of the season with teammate Cooper and Cianciarulo in tow. Cooper quickly went after his teammate out front and made an attempt for the lead, however, Ferrandis would shut the door and hang on. Ferrandis led the opening lap, followed by Cianciarulo and Cooper.

Knowing that every point in the championship matters, Cianciarulo had his sights set on Ferrandis for the race lead. On Lap 2, Sexton used his race craft to takeover third from Cooper and quickly focused in on the two riders out front. Every time Cianciarulo appeared to make a run at Ferrandis, the Frenchman would counteract and prevent his rival from picking up momentum.

With the race winding down, Ferrandis remained consistent at the head of the 40-rider field to keep Cianciarulo at bay and take his seventh moto win of the season by 1.1 seconds. Cianciarulo finished just behind in second, followed by Sexton in third.

Ferrandis‰Ûª better second moto finish gave him the edge in a tiebreaker with Cianciarulo for his fourth career victory (2-1). Cianciarulo finished runner-up overall (1-2) on the day, while Sexton earned his second overall podium of the season in third (3-3). 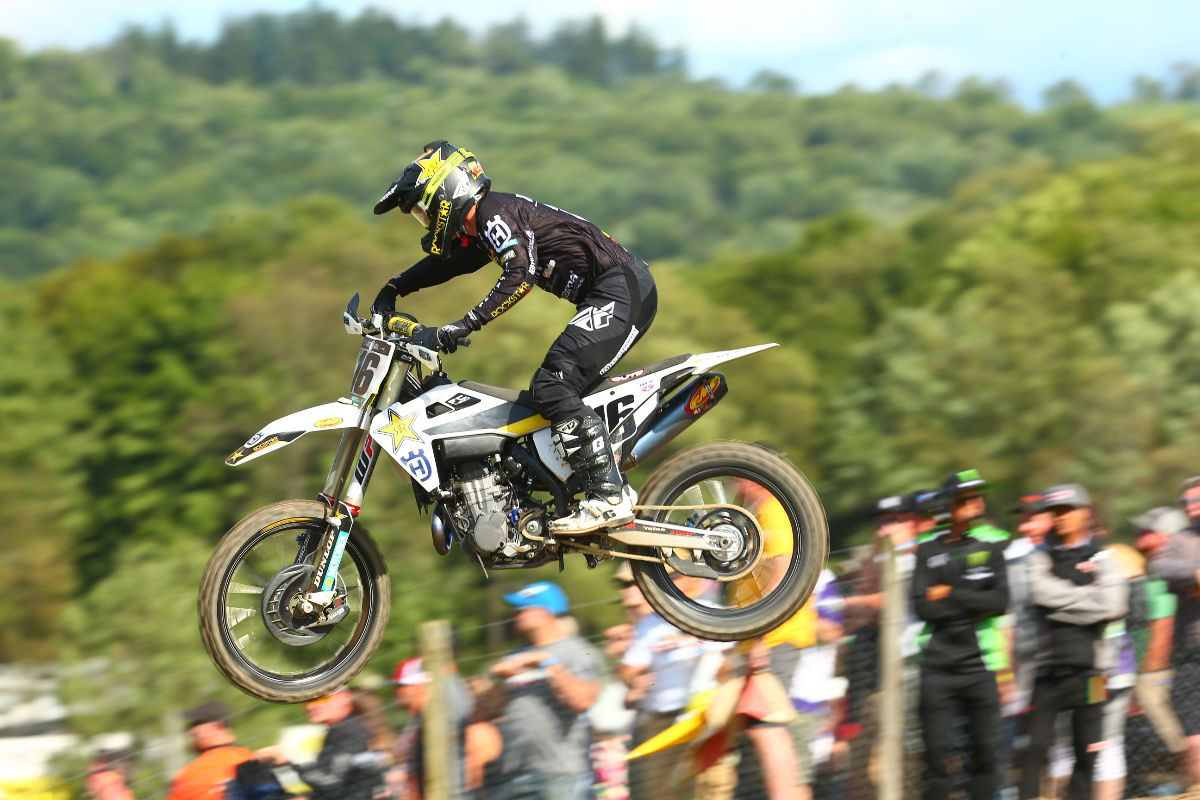 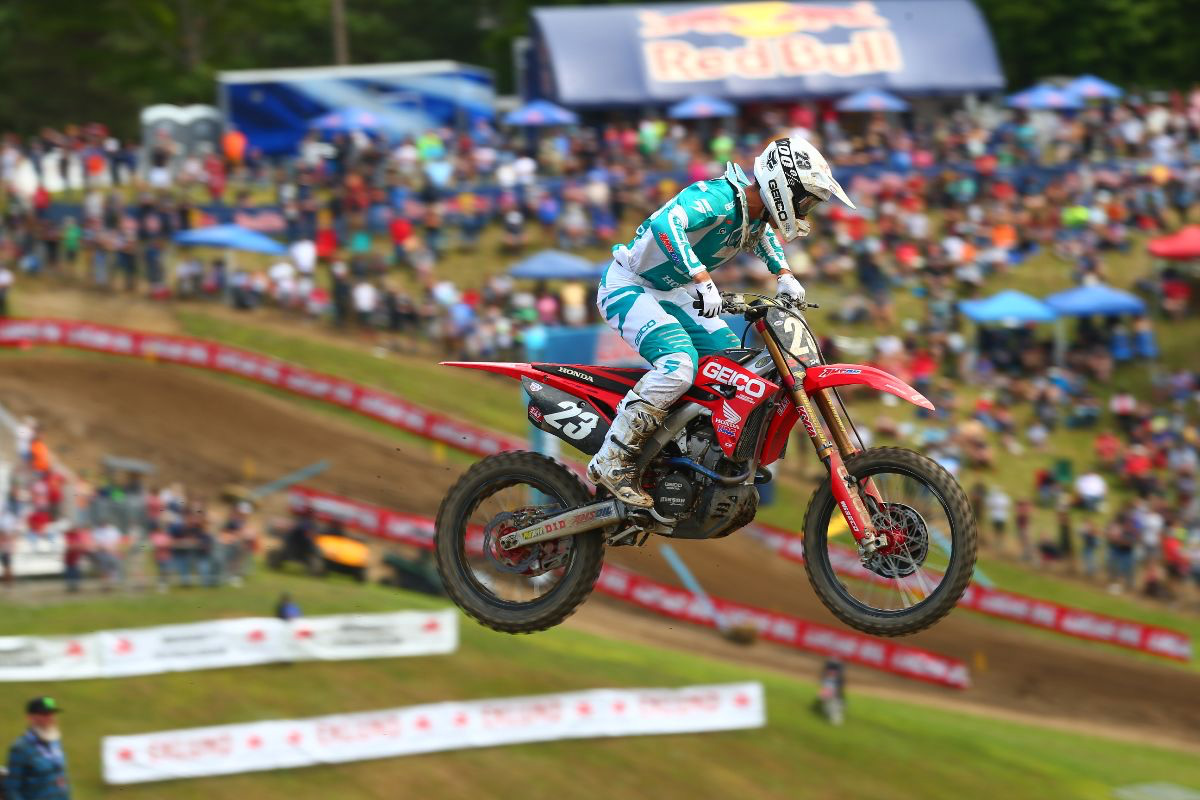