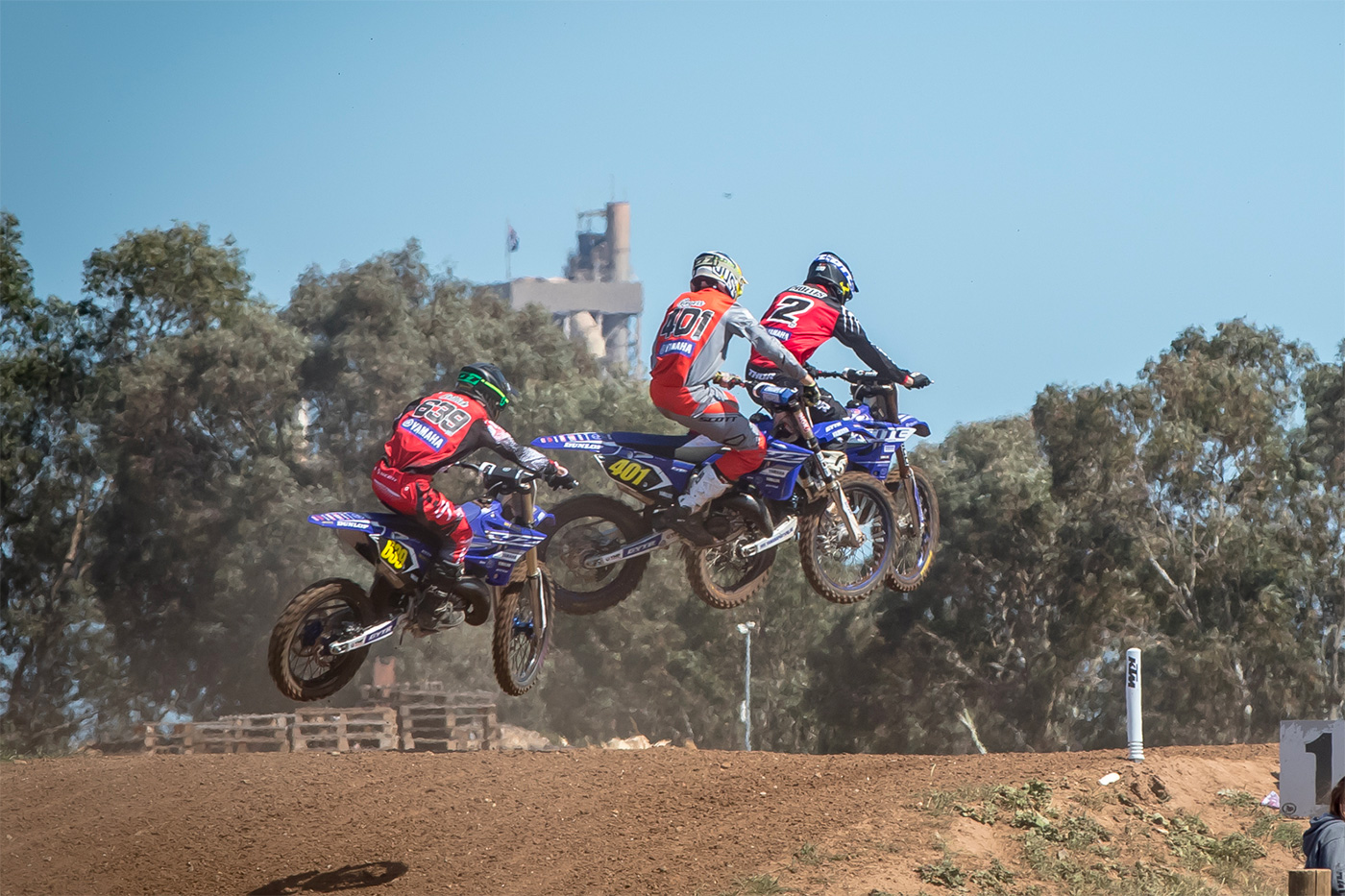 Photo: Arryn Minerds
Day Three of the 2019 KTM Australian Junior Motocross Championships being held at the Motocross Riders Association in South Australia was contested once again under hot, windy conditions.

With the club once again to be commended on their efforts to keep the dust at bay as multiple riders started to reveal themselves as championship contenders as the finals continued for some classes, and the remaining heat races wrapped up.

128-150cc 2st/250cc 4st ‰ÛÒ 13-U15
Final 3 of this class was dominated by Queenslanders, with Jack Mather his style and taking the win with the best lap time of 1:53.763 followed by Brad West and Jackson Camilleri crossing the line in third place.

65cc ‰ÛÒ 7-U10
Heat 5 of this class was taken out by Queenslander Cooper Downing, local Ryder Woodrow (SA) second with fastest lap time of the race 2.21.399 and Victorian Hunter Cameron placed third.

128-150cc 2st/250cc 4st ‰ÛÒ 13-U16 Girls
The third final of this class was run in the heat of the day and saw Charli Cannon bring it home for Queensland with an impressive fastest lap time of 2:04.487 ahead of Victorian Madison Healey and Taylah McCutcheon from Queensland coming in third.

Heat 6 was a rip roarer for Queensland with Jet Alsop taking the win over his fellow state counterpart Liam Owens and Koby Hantis from New South Wales followed closely behind for third.

85cc/150cc 4st ‰ÛÒ 12-U16 Girls BW
The girls came out early in the day for their second final and saw Queenslander Charli Cannon cut through the field and storm to first position and holding on to cross the finish line for the win, once again with a fastest lap time of 2.00 ahead of fellow Queenslander Taylah McCutcheon and Taylor Thompson from New South Wales third.

The third final was run later in the day with Charli Cannon from Queensland taking her second win of the day over Taylor Thomson (NSW) who was closely followed by Taylah McCutcheon (QLD) for third.

100-125cc 2st 15 Yo
South Australia‰Ûªs Alex Larwood continued his winning ways in the eldest junior 125 class, running away for a seven second lead in Final 2, leaving Blake Fox from New South Wales to come home in second ahead of Western Australia‰Ûªs Cody Chittick rounding out the top three.

Blake Fox looked as though he may finally have the better of Larwood in the third final, passing both the South Australian and West Aussie Cody Chittick to take the lead. However, it was once again Larwood who came through the win, setting up a brilliant pass for the lead before going on to win by 13.8 seconds. Levi Rogers from Queensland closed in on Fox during the final lap but came up just short crusting the line just .3 of a second behind Fox for third.

85cc/150cc 4st BW ‰ÛÒ 12-U14
Heat 3 for this class was won by New South Welshman Ryder Kingsford with the fastest lap time of the race, 1:55.831, Seth Burchell, also from New South Wales crossed the line second and West Australian, Dylan Walsh was third.

Heat 4 saw New South Welshman Connor Towill have the fastest lap time of 1:56.913 to take the win ahead of Tasmanian Jett Burgess-Stevens and Queensland‰Ûªs, Byron Dennis crossed the line in third.

Seth Burchell (NSW) put in a blistering ride in heat five to take the win by 7.7 seconds ahead of Brenton Wilson, with Bryon Dennis (NSW) rounding out the top three.

Connor Towill (NSW) made it two heat race wins from two starts in the class for the day, with a solid win ahead of Jett Burgess-Stevens, with Kobe Drew crossing the finish line in third.

85cc/150cc 4st ‰ÛÒ 14-U16
Final 2 of this class was close right up to the end with New South Welshman Hunter Collins having the fastest lap time of 1.55:338 to take the win, Ben Novak also from New South Wales came home in a close second and Jackson Camilleri rounded off the top three.

In the third Final it was once again Hunter Collings holding on for a narrow one second win ahead of Ben Novak with the duo going 1-2 across the first three finals, while Zachary Watson stayed in contention with the leading duo, finishing the race just 4 seconds behind the race leader in third.

65cc 10-U12
There was only one final for this class raced today being Final 2 which saw New South Welshman Ky Woods win with an impressive best lap time of 2.04. ahead of West Australian Kayden Minear and Queenslander Jake Cannon coming in third.

125cc ‰ÛÒ 13-U15
Heat 3 of this class saw a super quick lap time of 1:52.026 from Tasmanian Jett Burgess-Stevens to take the win over West Australian Liam Atkinson with Ryan Alexanderson bringing it home for Queensland with third place.

Heat 4 for this class followed immediately after and was close racing from beginning to end with Queenslander Zachary Watson taking the win over New South Welshman Hunter Collins and third across the line was sandgroper Brock Flynn (WA).

50cc Division 2 ‰ÛÒ 7-U9
The one and only race for these little tackers today seen fellow West Australian‰Ûªs Mason Brown and Deegan Fort battle it out for 1st and 2nd respectively with Queenslander Jaxon Downing rounding off the top three.

128-150cc 2st/250cc 4st 15 yo
Local rider Alex Larwood took out the second final and the only race of the day for this class ahead of New South Welshmen Blake Fox and Cameron Torpy in what was the quickest race of the day.

With heat races now complete The KTM Australian Junior Motocross Championships really start to heat up on day four tomorrow, with riders set to make their claims as the favourites for this year‰Ûªs titles.