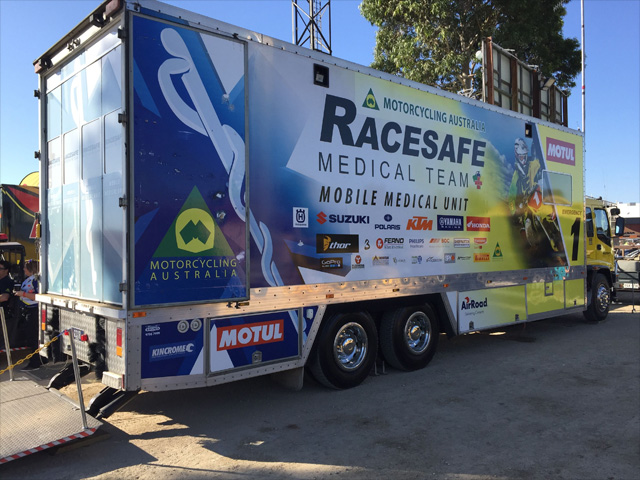 The high-flying 2015 Australian Supercross Championship presented by Penrite Oils is a spectacular sport where man and machine are pushed to the limits, so it‰Ûªs reassuring to know competitors take part under the watchful eye of Racesafe, Australia‰Ûªs leading specialised motorsport medical service.

Over the past 20 years Racesafe has served as the Official Medical and Safety Team to many of Australia‰Ûªs major motorsport events, including the Australian Superbike, MX Nationals and Supercross Championships, in addition to local Moto GP, World Superbike and V8 Supercar races.

Racesafe provides a full range of motorsport emergency services, which includes a highly specialised and experienced team of trauma doctors, paramedics, nurses, physiotherapists and rescue personnel who donate their time and expertise to ensure the safety of motorsport competitors.

‰ÛÏFrom our earliest stages of planning the 2015 Australian Supercross Championship presented by Penrite Oils, the involvement of the Racesafe team was always a high priority,‰Û