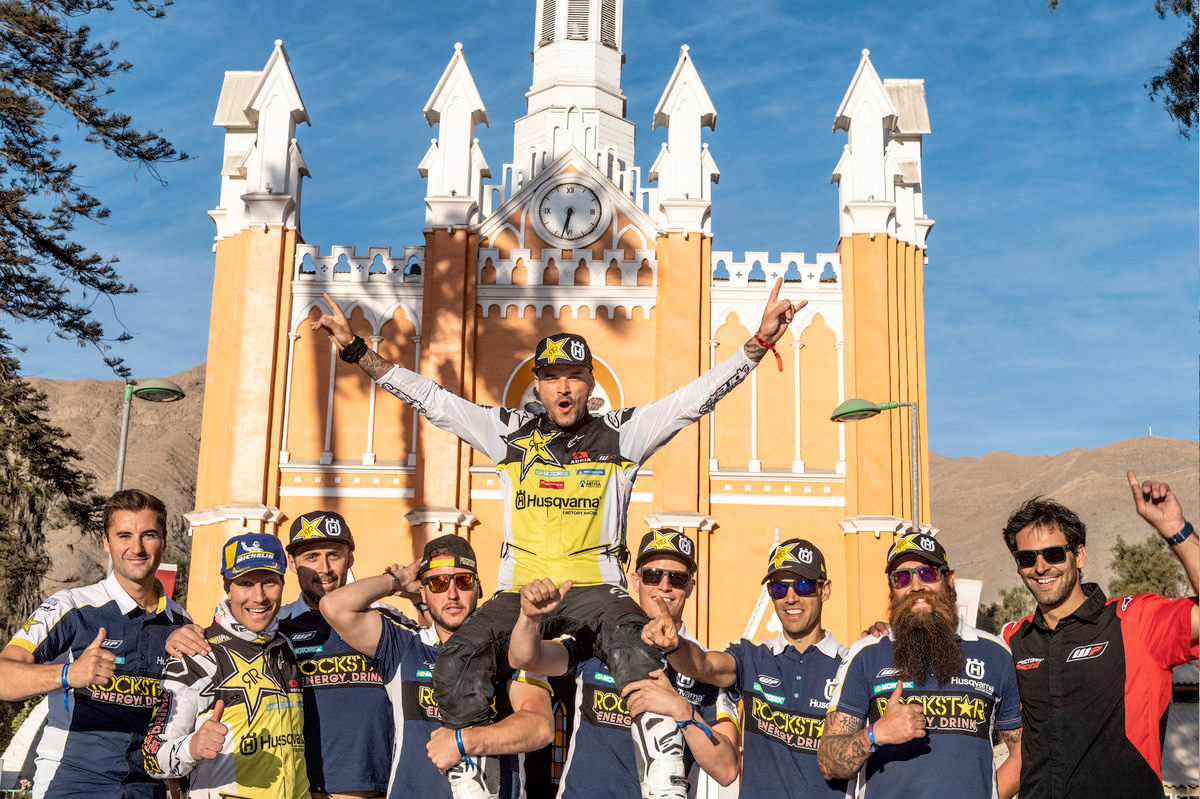 Pablo Quintanilla. Photo: Rally Zone
Putting in a dominant performance to top the fifth and final stage, Pablo Quintanilla has won the 2019 Atacama Rally while Sam Sunderland has been crowned 2019 World Champion.

Going into the final day with a narrow 54-second advantage, Quintanilla knew he would have to make the final 184.59-kilometre timed special count. As the fifth rider to enter the stage, the Chilean star immediately set about chasing down the riders ahead. After soon catching and passing Matthias Walkner, Pablo was free to navigate his way through the sand dunes of the Atacama Desert.

Maintaining good speed while making the minimum of mistakes on the short, but tricky, final stage, the former Cross-Country Rallies World Champion crossed the line with a close-to-two-minute advantage over the second-placed rider. His pace on the timed special was enough for him to increase the gap at the top of the standings to almost four minutes ‰ÛÒ an incredible achievement considering the event marks the local hero‰Ûªs return to competition following the injury he sustained at the Dakar Rally earlier this year. 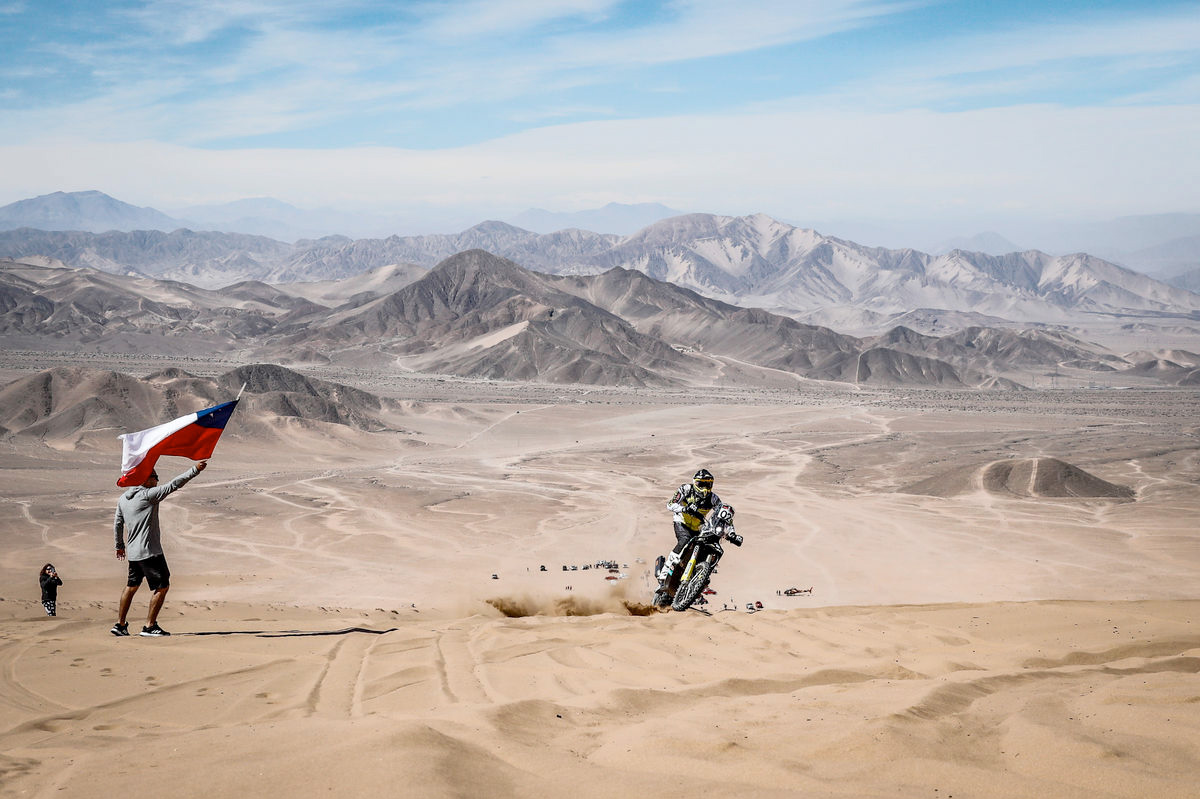 Pablo Quintanilla. Photo: Rally Zone
‰ÛÏI‰Ûªm really, really happy," Quintanilla said. "I never expected to win the race here in Chile. It‰Ûªs been five very tough days but I‰Ûªve done it and feel over the moon right now. I couldn‰Ûªt have hoped for a better come back ‰ÛÒ after eight difficult months off the bike I have come back and won my home race. I am so happy for the team ‰ÛÒ they have stood by me the whole time and I couldn‰Ûªt have done this without them. Also, a big thank you to all the fans for the support they have given me over social media ‰ÛÒ it really does mean a lot. After such a tough time after Dakar, this victory feels very special.‰Û
Sam Sunderland. Photo: Rally Zone
Sam Sunderland won the 2019 FIM Cross-Country Rallies World Championship by placing as runner-up.

With an unbeaten record in the 2019 championship leading into round three, following wins at the Abu Dhabi Desert Challenge and the Silk Way Rally, Sunderland arrived in Chile with a healthy points advantage over second-placed Andrew Short. Delivering a mature and calculated performance, the 2017 Dakar Rally Champion put in a superb ride throughout the challenging five-day event in and around CopiapÌ_ to finish second overall, earning himself enough points to claim the title with one round remaining.

Racing with incredible consistency, Sunderland finished inside the top three in all five stages of the Atacama Rally. On the final day the Brit did exactly what was needed of him, coming home safely and in turn secured his first ever world championship title. 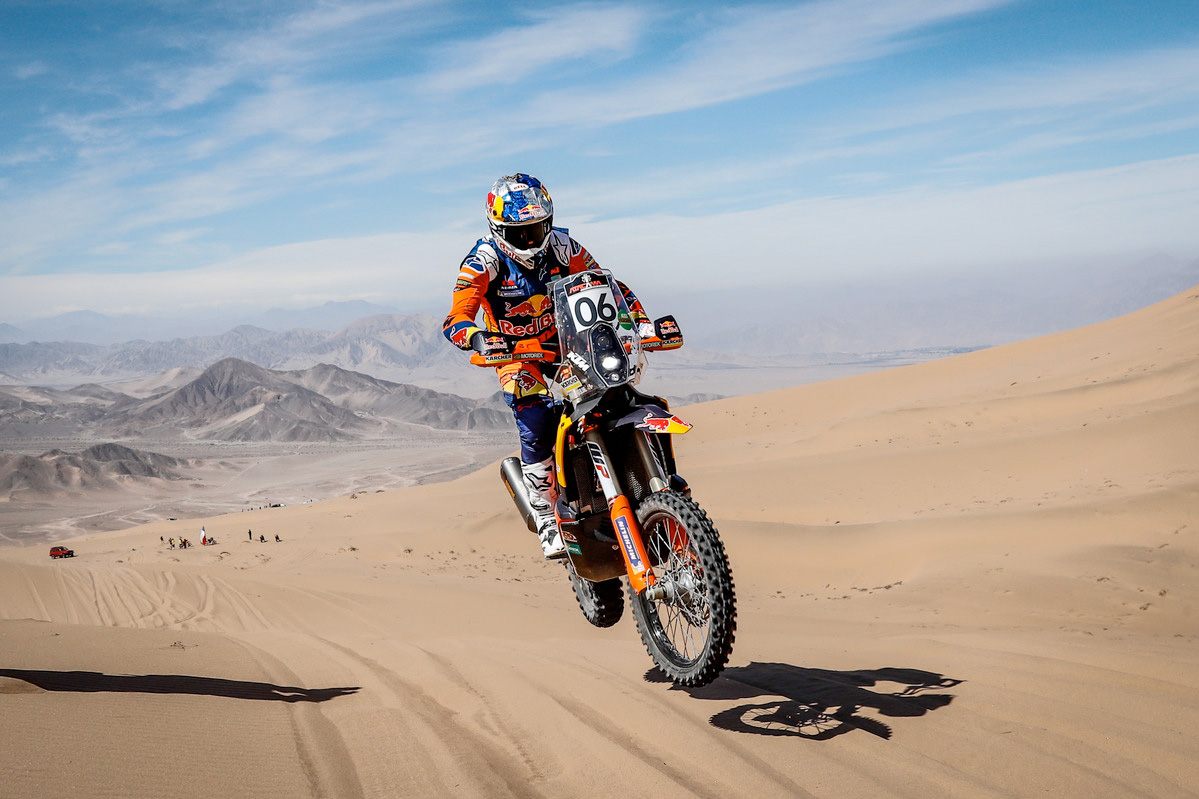 Sam Sunderland. Photo: Rally Zone
‰ÛÏI‰Ûªm so happy to win the world championship, I couldn‰Ûªt have done it without my KTM team," Sunderland said. "I have to thank Toby (Price) as well for his help ‰ÛÒ I bent my disc on the marathon stage and Toby was kind enough to swap, so that kept me in the chase. It was always in the back of my mind that I could take the title here in Chile, but I tried not to think about it too much as the race went on, I just tried to focus on getting through each day safely and in a good position. It‰Ûªs been a really tough event here in Chile as always but it feels great to be standing here now as world champion. I have come so close in the past having finished as runner-up twice in 2015 and 2016, but this title makes all the hard work worth it.‰Û 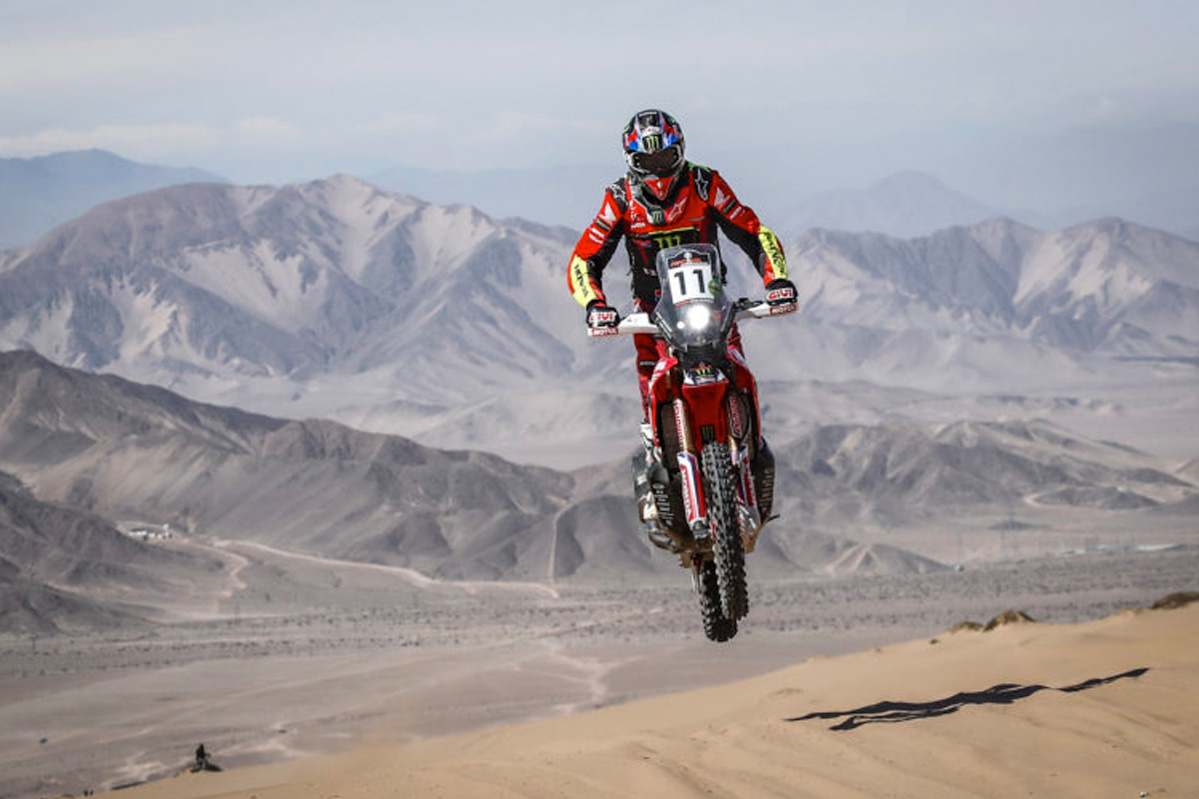 Barreda headed out this morning hell bent on hunting down the two riders who had set off ahead in the starting order. The Spaniard‰Ûªs intention was to make up time on the two riders and secure a final podium place.

"I am happy. Today was a day where I had to push and really give it everything," Barreda said. "It was a stage with a lot of sand, but a fast one. It was necessary to match the speeds with the hazards. I kept a good, fast pace, and I am happy because in the end I finished in the third overall position in the race. It's always nice to finish on the podium!" 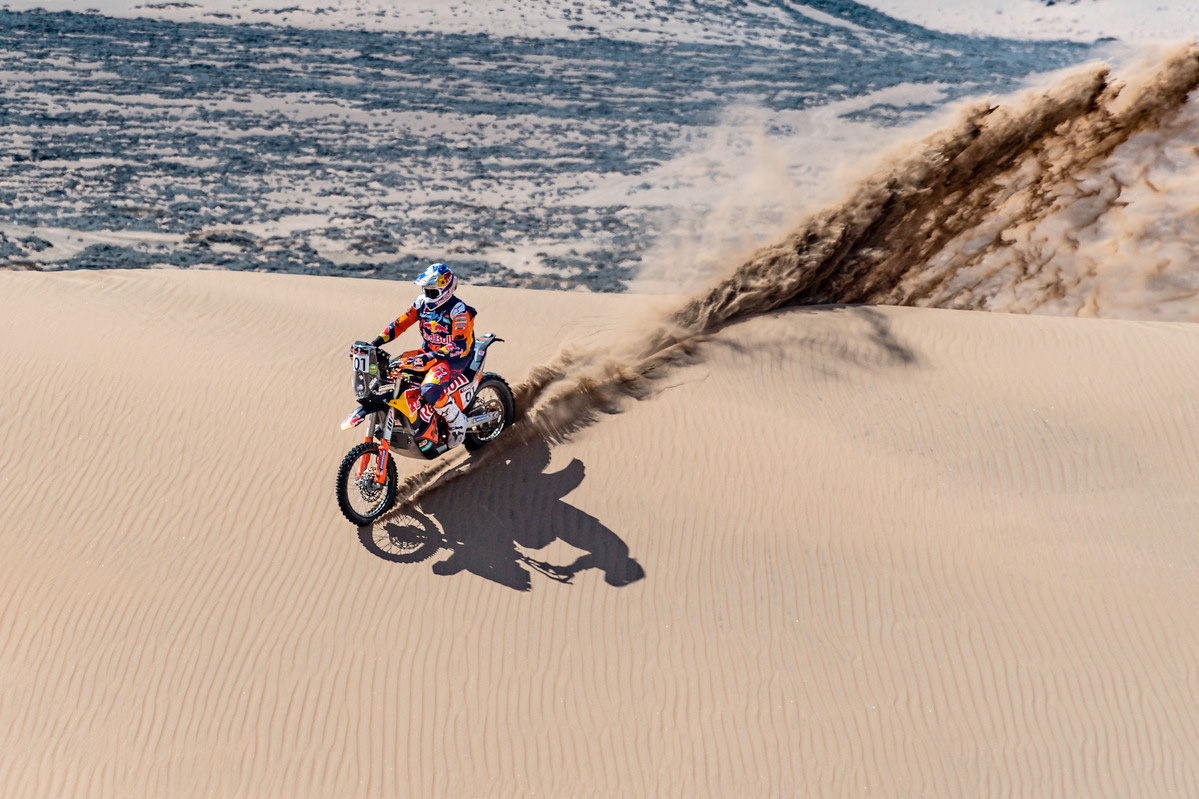 Toby Price. Photo: Rally Zone
Seventh on the final stage, defending champion Toby Price put in a strong performance for the entire rally to ultimately finish in fourth overall. The Australian, making his first rally outing of 2019 since the Dakar Rally in January, soon found his rhythm on the fast, rocky pistes of Chile and is now looking forward to another strong result at the final round in Morocco.

‰ÛÏStage five has gone well, it was only about 180 kilometres, so not too long," Price said. "Sam caught me up and we led the entire stage from start to finish. It‰Ûªs always tough to lead out especially through the sand dunes but I think we did a good job. Overall, I‰Ûªm really happy, it‰Ûªs been a good rally and a good one to come back to. I know I still need to do a little work on my wrist ‰ÛÒ it‰Ûªs not quite right yet, but the plan is to be in slightly better shape for Morocco and then training in Spain before we gear up for the Dakar in Saudi Arabia next year.‰Û 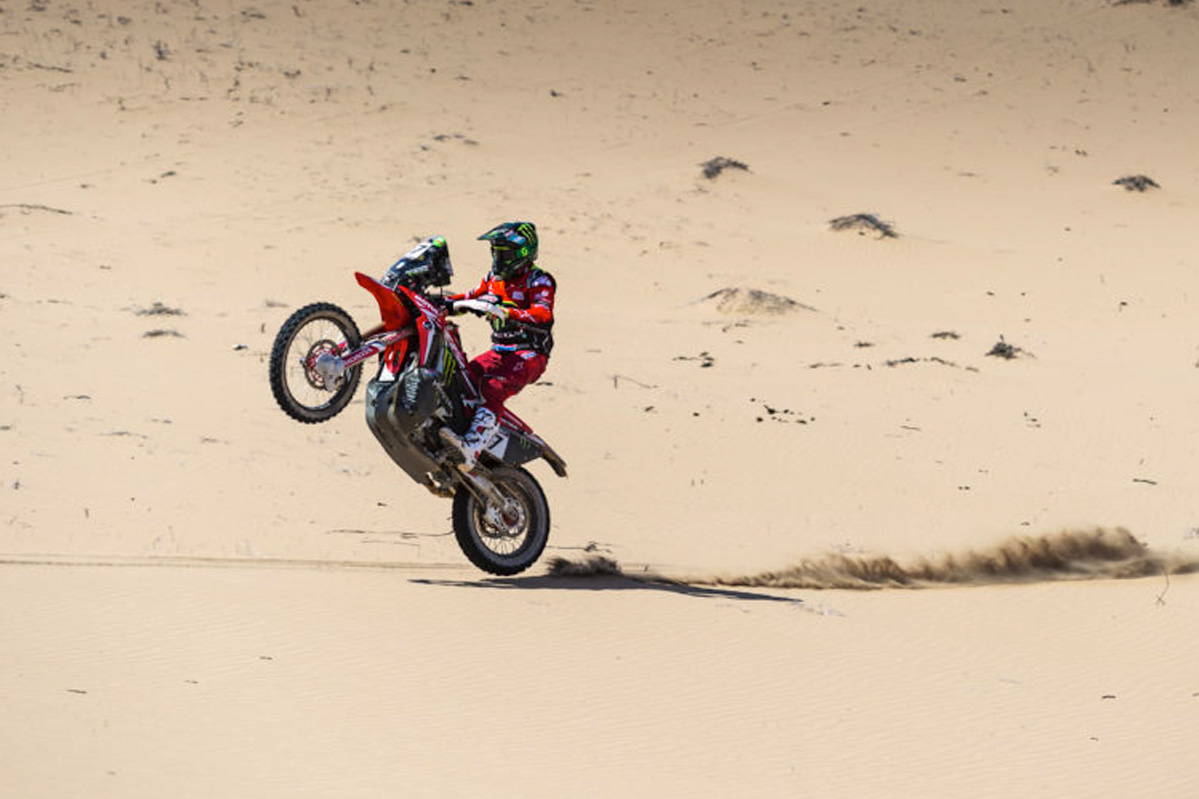 Kevin Benavides e. Photo: Rally Zone
Kevin Benavides had likewise held an outside chance of finishing the Chilean rally on the podium. The winner of last year‰Ûªs edition, who began further down the starting order, went all out to reduce the deficit with the riders ahead on the leader board, but did not succeed in making contact with the frontrunners. The Argentinean came home 5‰Ûª42‰Û