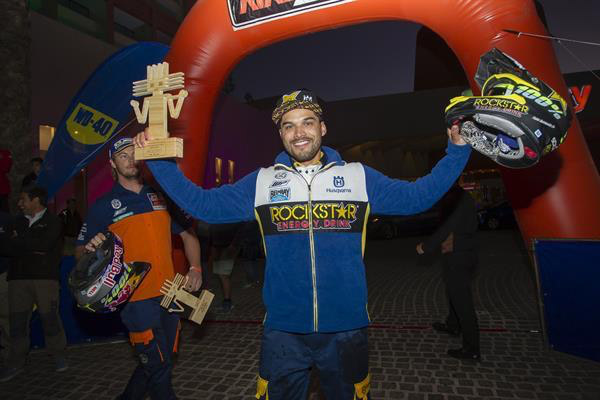 It was not only a memorable first victory for Husqvarna Motorcycles factory team in international rally competition but also a popular win for Quintanilla‰Ûªs fans at home in Chile.

Wrapping up the five stages in a combined time of 11:48.38 hours, Quintanilla was fastest home in the final 100km of sand dunes, finishing the stage in 58.51 minutes. This gave him the overall win by just 29 seconds from second-placed Toby Price of Australia, the winner of the 2016 Dakar Rally.

Joining them on the podium was Kevin Benavides of Argentina, whose combined time was 9.35 minutes behind Quintanilla.

As an added bonus, Quintanilla now heads the leader board in the FIM World Cross-Country Rallies Championship going into the final Round Five, the Oillibya Rally of Morocco (October 1-7). Quintanilla leaves Chile with 66 points, three ahead of KTM factory rider Sam Sunderland. T

‰ÛÏToday was a difficult stage for sure because the gap between me and Toby (Price) was very small." Quintanilla said. "I had to push a lot to win and I am very happy.

"I have been looking for this victory for a long time. I put in a lot of work and I‰Ûªve been training hard. I‰Ûªm happy and I‰Ûªm also happy for my team because it is also our first victory of the season and we are now leading the championship, which is my goal.

"Now I need to keep up this training rhythm and focus on being 100% fit for Morocco, where I will try my best to be the world champion.‰Û 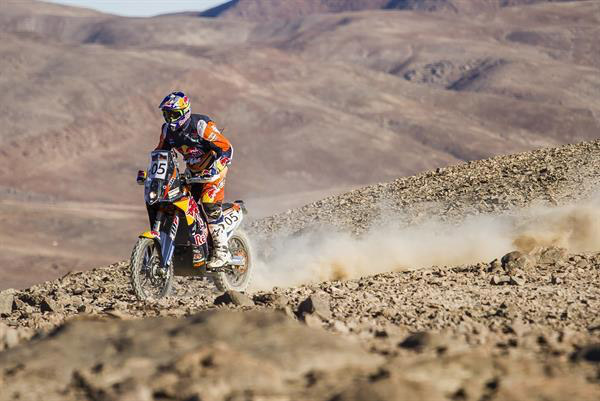 Toby Price, who had to withdraw from the Sealine Rally through injury, now has 50 points.

"It was a long and unforgiving day and we got through pretty well. We had a few little navigation errors near the end but other than that it turned out to be a pretty good day. It was really long, that‰Ûªs what made it difficult, but it was all really fast, wide-open piste. There wasn‰Ûªt too much navigation until the end but we‰Ûªre here, the bike is in good condition and I‰Ûªm in good condition, so hopefully it will be like that until the end.‰Û