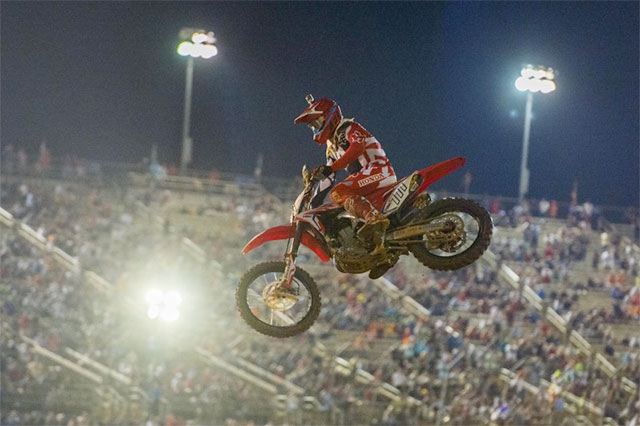 Evgeny Bobryshev gave the all-new Honda CRF450RW a promising debut today at the MXGP of the Americas, held at the Charlotte Motor Speedway.

Whilst race one proved something of an acclimatisation run for the Russian, who was using the new machine for the first time in anger at an MXGP event, in race two Bobby was right in the podium fight for the duration of the race.

From the start, Evgeny Bobryshev launched towards the front with a strong start and was quickly fighting for second position. As the race progressed, that fight became for third, but Bobby and the team were very encouraged with the promise and potential the new bike showed on its maiden outing.

‰ÛÏI really enjoyed my day today ‰ÛÒ the track was great and riding the new 2017 CRF was fantastic. In the first race I needed to understand the bike in a race condition so it took us a little time to get really used to it, but the second race was way better,' Bobryshev explained.

'I had a good start and sat in fourth place for the whole race pushing for third. The speed was the same so I couldn‰Ûªt make a pass unfortunately, but we definitely had podium pace here with the new bike. I really feel comfortable on the bike and I really enjoy to ride it ‰ÛÒ I know that there are many more positive results coming.‰Û 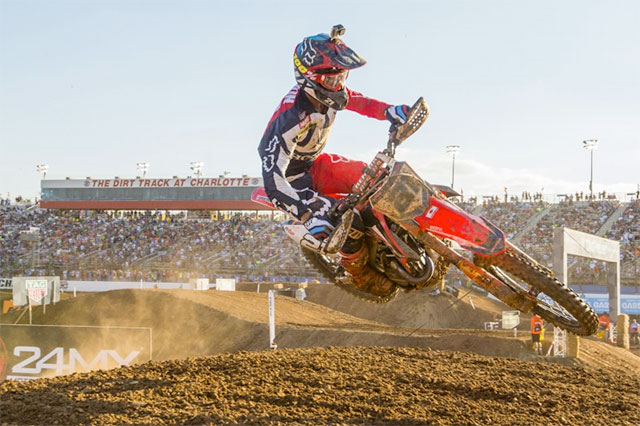 Meanwhile on the number 21 machine, Gautier Paulin started the day strongly and was attacking the front of the field in the opening free and timed practice sessions, but sadly it wasn‰Ûªt to be his weekend. Two bad starts left him in the melee, and his day was cut short when he caught his foot in a rut in the second race, crashed and twisted his knee.

‰ÛÏIt was a really good venue and a really good track here in Charlotte, and I enjoyed riding it a lot. They did a lot of hard work since the rain yesterday and the condition of the track today was good. Unfortunately though I had two bad starts today which made it hard,' Paulin said.

'My riding was good but I‰Ûªm not happy with myself about the starts. The track was really technical and had some nice flow, and I think with good starts we could have been in the mix today.

'In the second moto, I also twisted my ankle badly which is why I had to stop. On the inside of one corner I got my foot stuck in the mud so I lost the front end because of that, and when I crashed it twisted my ankle. The team have worked on it already tonight and it‰Ûªs feeling better, but at first there was so much pain I couldn‰Ûªt continue," the Frenchman concluded.