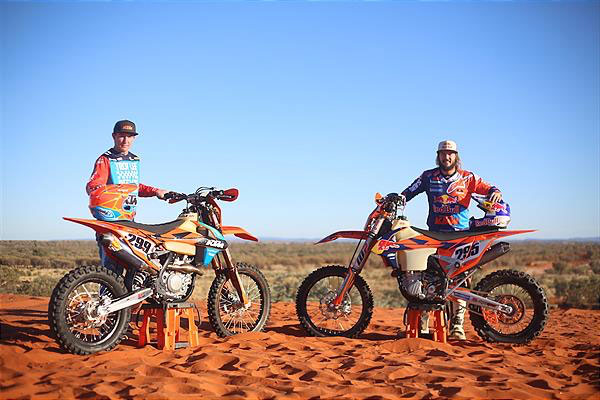 This year marks Price's return to Finke after missing last year through injury, eager to record his sixth-career victory in the gruelling environment of the Australian outback aboard the thundering KTM 500 EXC-F.

The 30-year-old from Singleton, who finished third in January's Dakar Rally with Red Bull KTM Factory Racing, will once again attempt the Iron Man double in the desert, also competing in the car category. As he did in 2016, that challenge will see him navigate the 480-kilometre trek from Alice Springs to Finke and back twice each way.

"Everything is going really well at this point and I am pumped to be back on two wheels with the North Star Pastoral KTM Desert Racing Team out here at Finke," Price enthused. "It's exciting to be back, the team has done such a great job with the KTM 500 EXC-F and it will be a big week competing in both categories. The lead-up has been positive, an important time for testing after missing last year's race, so I feel comfortable and have a good set-up now - it's just a matter of getting that time in going up and down the track.

"We're looking forward to day one! It's definitely different to rally, being full-gas and wide-open at your limit for around two hours, so you have to stay on top of your game and it is definitely a challenge that we're ready for in going for win number six at Finke."

As for Alice Springs local David Walsh, after leading the charge down to Finke one year ago, the 28-year-old is a clear podium threat once again, this time alongside Price on the factory KTM 500 EXC-F machinery. A mainstay within the North Star Pastoral KTM Desert Racing Team, Walsh's most recent podium came in 2016 when he finished third overall.

"It's all shaping up really well," Walsh shared. "The team has helped me so much heading into this year, I am feeling fit and the KTM 500 EXC-F is handling nicely, so I am really excited for the race. Hopefully there is some good racing between Toby and I, it's good to have him back in the team and obviously he is always the guy to beat. I am just looking forward to getting out there, doing my own thing, focusing on my own race and hopefully being able to put it in front of him! I've spent more time on the bike in the lead-up this year, trying to get that intensity up, so I have prepared myself the best that I can and am ready to go racing now."

Now that the preperation is behind them, Glenn Kearney - Motorsport Manager, KTM Australia, is ready to get out there and get going.

"It's getting down to crunch-time and we're really looking forward to race-week now. The whole team has put in a huge effort as usual, since logistically it is such a challenging event, but between everybody we have enjoyed a strong preparation," Kearney said.

"We've spent around four weeks pre-running the track and GDR has been working really closely with us on the WP Suspension, so everybody is really happy at this point. It's great to have Toby back on-board, he is a true professional when we get down to business, and I think he will have a real challenge from David this year as well. Last year he had that dominant lead on the way down and he looks even stronger this year, so we have made progress once again and are aiming for a really strong performance with the KTM 500 EXC-F."

Fans of the North Star Pastoral KTM Desert Racing Team will have the opportunity to meet both Price and Walsh in the lead-up to the 2018 running on Thursday, 7 June, at Peter Kittle Motor Company (46 Stuart Hwy, Alice Springs) between 3:30-4:30pm and Desert Edge Motorcycles Alice Springs (23 George Cres, Alice Springs) from 5:00-6:30pm.