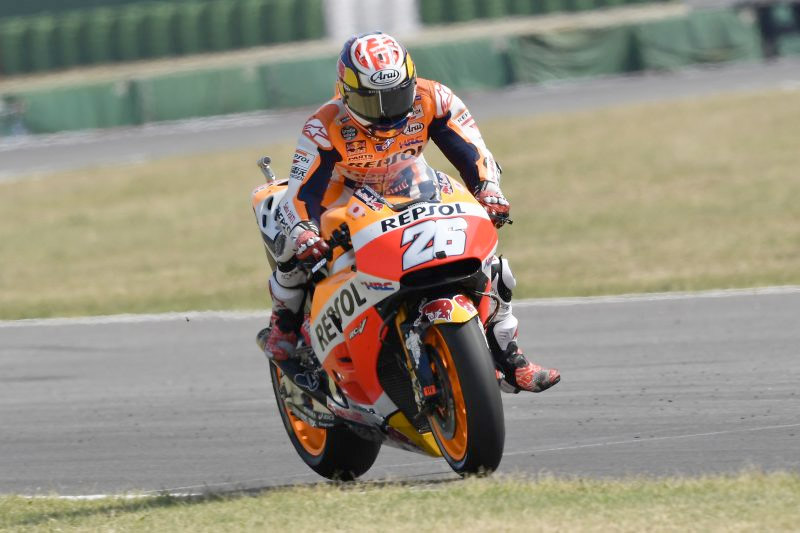 Repsol Honda‰Ûªs Dani Pedrosa became the eighth different MotoGP winner in eight races overnight, taking a stunning victory at Misano, his 29th in MotoGP and the 52nd in his career, as well as the 120th for Honda since the start of the MotoGP era in 2002.

Dani‰Ûªs choice of a soft-front and medium-rear Michelin tyre combination proved to be the best one for today‰Ûªs conditions and for his riding style, as it allowed him to charge through the field at an incredibly fast pace and to set a new track record of 1‰Ûª32.979 on his way to the victory.

Starting eighth on the grid, he was sixth at the end of the first lap and progressively improved his speed over the course of 22 laps, overtaking Dovizioso, ViÌ±ales, Marquez, Lorenzo and finally Rossi before crossing the line 2.8 seconds ahead of the Italian to became the fourth Honda rider to win a race this year.

‰ÛÏIt was a great race, and it has been a long time since I‰Ûªve had these feelings." Pedrosa stated. "Even I was surprised by the performance I put in today because I hadn‰Ûªt expected to go so fast; we were fantastic.

"The key was the pace; I was able to fight my way through, especially in the final part, and being consistent allowed me to catch the riders at the front. It‰Ûªs very nice for me to take a victory again, after all the effort made by those who have been with me in this challenging season so far: my family, my team and my fans.

"It has been very difficult, so I‰Ûªm very happy for all of them. Today I enjoyed myself, although I was a little worried about the choice of front tyre because I hadn‰Ûªt used it in hot conditions. In the end we were focused and everything went very well; it was an opportunity we had to take advantage of, and I think we achieved a great victory.‰Û 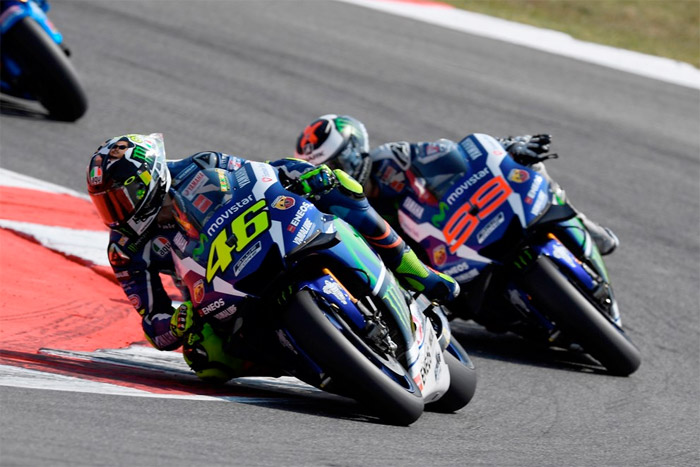 The Yamaha duo of Rossi and Lorenzo filled the second and third steps of the podium
Thousands of passionate Italian fans at the Misano World Circuit Marco Simoncelli were on the edge of their seats as they cheered on their Movistar Yamaha MotoGP hero, Valentino Rossi who delivered a strong performance and led for most of the race to ultimately take second place ahead of teammate Jorge Lorenzo has Yamaha filled the final two steps of the podium.

Starting from second on the grid, Rossi entered the first corner side-by-side with Maverick ViÌ±ales, but was quick to leave the Spaniard behind when he flicked his bike left into turn 2 as he wanted to prevent his teammate from clearing off at the front. After the first lap there was just 0.202s between them and only a lap later the Doctor leaped past Lorenzo in turn 14, reversing the order. He followed it up with two fastest laps of the race that far, 1'33.672s on lap three, and a 1'33.384s on lap five, increasing his lead to over 0.8s.

The local hero continued to push and was able to extend the margin to 1.2s, but Dani Pedrosa had overtaken Lorenzo and was chasing the Doctor down with eleven laps to go. The pair got involved in a fight for first place three laps later. Making his Yamaha as wide as possible, Rossi defended his lead tooth and nail but with seven laps to go Pedrosa made an aggressive pass at turn 4. Determined to fight to the very end of the race Rossi put in a personal best lap of 1'33.025s, three laps to the end, but he was unable to catch his rival and took the chequered flag in second place, +2.837s from the front.

"Anyway, it's second place. It's a shame here in Misano, it's a race I especially tried to win, but today it wasn't possible. Thank you to all the fans that were at the track, it was great." 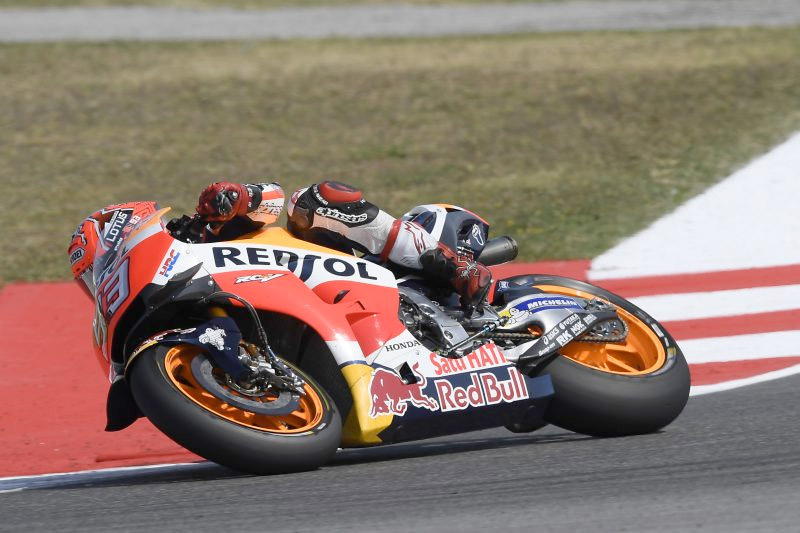 Marc Marquez may have finished off the podium this weekend but still maintains a handy points lead
Rossi's 20 points gives him a total score of 180, keeping him in second position in the championship standings, with a 43 point margin to the leader. He is 18 points ahead of Lorenzo in third place, who has collected 162 points so far this season.

"I can't be very happy, because I expected a bit more from the race." Lorenzo admitted. "I tried hard for the victory but today I simply didn't have the best pace.

"Especially Dani had a better pace and Rossi had one tenth on some laps. Little by little they were going away, so I tried my best to stay there but they went ahead. Honestly they were faster."

Marc Marquez finished in 4th position and though it was not the race result he was after, he leaves Italy still maintaining a comfortable championship lead of 43 points over nearest rival Rossi.

‰ÛÏToday‰Ûªs race was complicated and it was perhaps not one of my better days." Marquez said. "I went out with great desire and I felt strong, able to recover the ground I had lost in the first few laps and close in on Valentino and Jorge.

"Then I saw I had problems with the front tyre, because I was losing it a lot. When Dani passed me, I tried to follow him, but I saw that it was more likely that I would crash than finish on the podium, so I concentrated on finishing the race. We have to keep improving, but the positive thing is that we only lost a few points during a weekend that had been good but that we weren‰Ûªt able to capitalize on in the race. Now we‰Ûªre very motivated for Aragon.‰Û 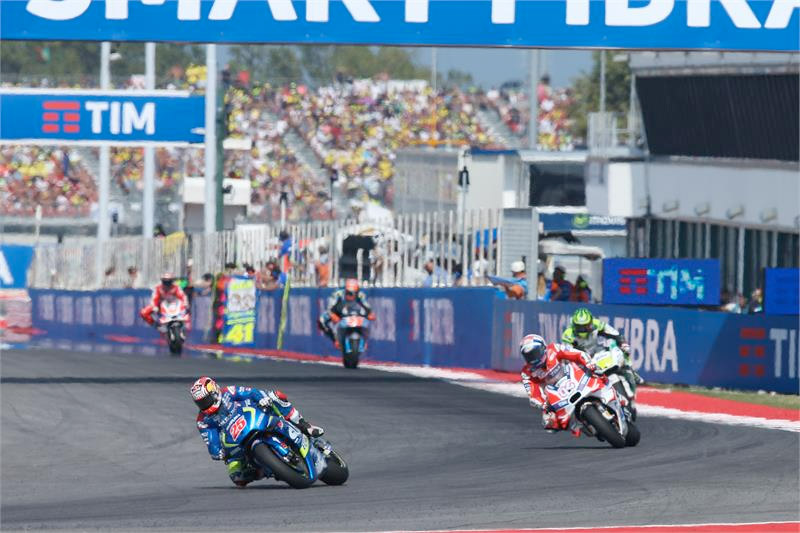 Marveric Vinales continued his great run of form for Suzuki at Misano
Maveric Vinales rounded out the top five, ahead of the leading Ducati of Andrea Dovizioso in 6th. Michele Pirro who stepped onto the Factory Ducati in place of the injured Andrea Iannone finished a superb 7th, with Monster Tech 3 Yamaha rider Pol Espargaro in 8th.

" I am really satisfied with this race, and although I couldn‰Ûªt get on the podium, fifth place is a really good result if we consider our starting points; this was one of the hardest tracks for our machine and here it was really hot - a condition in which we have always been struggling recently." VInales said.

"Finishing in fifth place, after winning a fierce battle, is a positive result. During the race I felt really confident with the front, but the rear had no grip at all, so I had to push really hard and adapt my riding style. I managed to keep with the leading group at the beginning but then I had to go back.

"At around half-race distance I felt I could push more and my lap-times became faster again. I had to give-up one position for having exceeded the track limit but recovered immediately. I must say thank you to my team, they did an incredible job and it‰Ûªs really a relief to be aware that now we are getting competitive also in hot conditions.‰Û 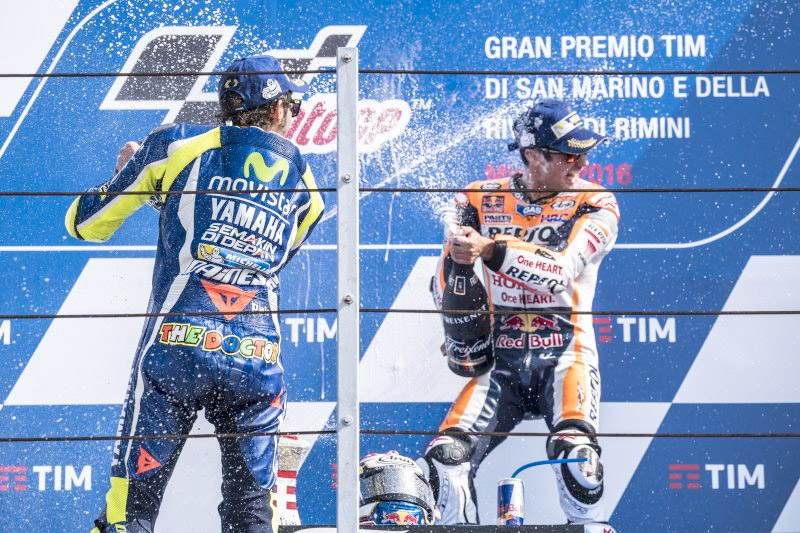