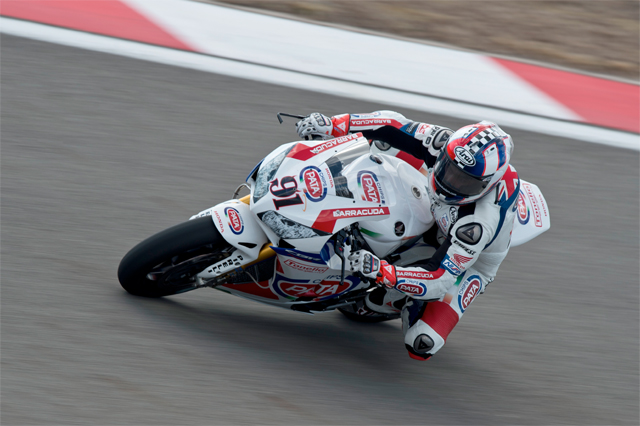 The Pata Honda team and its current rider line-up of Leon Haslam and Michel Fabrizio are preparing for round 12 of the 2013 World Superbike championship this weekend the 27th - 29th of September at Laguna Seca in the USA.

The 3.610km circuit is situated a couple of hours south of San Francisco near the Pacific coastal town of Monterey. While Laguna Seca has been a regular venue for the MotoGP world championship, it has not hosted a World Superbike round since 2004, when Australian rider Chris Vermeulen took both race wins on his Ten Kate-prepared Honda Fireblade.

Of the two Pata Honda SBK riders, only Leon Haslam has raced at Laguna Seca before but both will be determined to fine-tune their Honda CBR1000RR machines for optimum performance over the weekend.

"It was good to have a few days at home before the whole family set off for America on Monday." Haslam stated "I‰Ûªm really looking forward to going back to Laguna Seca where I raced once in 2004, my first year in World Superbikes.

"I remember it being an awesome place but my memories of the actual races are a little hazy. I know I broke my wrist in the second race, so that part of the weekend wasn‰Ûªt so nice.

What I do know is that Honda won both races with Chris Vermeulen, although the bikes were a bit different then ‰ÛÒ no electronics for a start. But that‰Ûªs an area where we‰Ûªve made some progress lately and, although we had one or two other issues in Istanbul, we continued to make forward steps at that last round.

"The guys have got a good plan for the final three races of the season so I hope we can continue the progress at Laguna," he added.

Michel Fabrizio who is currently filling in for the injured Jonathan Rea heads into the U.S race with a lot of motivation to put in a good result.

"I‰Ûªm still disappointed by the results that we were able to achieve at Istanbul because I think they could have been better." Fabrizio stated. "However, I am going to Laguna Seca with a big motivation.

"Although I have never raced at this circuit before I can hope for a good performance because of the experience that I was able to gain on the CBR in Turkey.

"I have been in contact with my crew chief, Chris Pike, and we have a clear idea about the direction we need to take in America so I am looking forward to riding at this iconic circuit," he concluded.

In a specially-revised schedule for this American round, race one will be run on Saturday with race two going on Sunday, with the Superpole sessions to determine final grid positions running on Saturday morning.