Outram, Tomich and Burchell Continue to Charge On Day Two of AJMX Finals 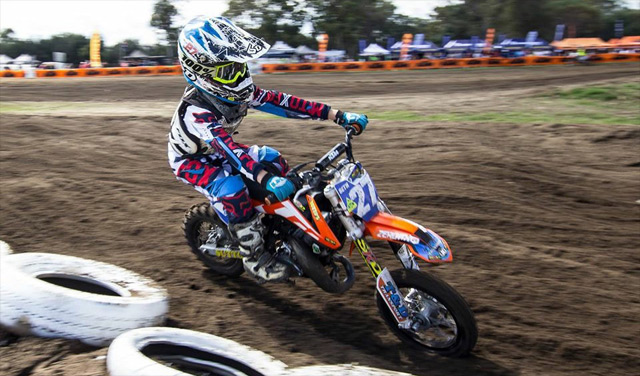 With the Shrubland Park circuit touched up for racing today, juniors were treated to freshened up track conditions, as day two of finals kicked off at the 2015 KTM Australian Junior Motocross Championships in Bunbury.

As the 2015 KTM AJMX begins to reach the business end of the Championship, riders gave finals everything they had today, with this year‰Ûªs front-runners leaving a lasting impression on today‰Ûªs spectators.

With qualifying races once again kicking off the AJMX action, when finals got underway it was the likes of Seth Burchell, Mitch Outram and Tyran Tomich and more, who impressed when racing kicked off today.

When the swarm of 39 Division 2 riders launched off the start gate, it was Western Australia‰Ûªs Jake Rumens who snatched the holeshot ahead of Seth Burchell and Seth Clark.

It wasn‰Ûªt long however before race order changed dramatically, with Burchell moving in to the race lead ahead of Braden Plath, Jackson Lyttle and Kayden Minear following closely behind.

With Burchell out in front, the action was left to happen behind him ‰ÛÒ and in one huge upset both Lyttle and Plath became absent from the front of the pack. Plath‰Ûªs bike unable to be restarted after it stopped on the start straight, and Lyttle going down and forced to come back through the pack.

With the race order drastically changed, it was Burchell who held on to take the win, ahead of Clark, and Minear who wrapped up their first moto in second and third respectively.

All eyes were on Mitchell Outram as the W.A youngster lined up once again, looking to back up yesterday‰Ûªs performance, in the second final of the 85cc 2-stroke / 150cc 4-stroke std/big wheel 14-u16 years class.

At the halfway point in the moto, it was an all Outram affair, with his number 62 KTM machine leading the way ahead of Liam Walsh and Morgan Fogarty, who followed behind in second and third places.

When the chequered flag flew, it was an undefeated Outram who impressed his home crowd fans, taking his second final win ahead of Walsh who crossed the line in second and Riley Dukes in third.

When the next bunch of junior riders headed out for racing, it was Husqvarna mounted James Scott who got to the early race lead, however it wasn‰Ûªt long before a hard charging Corben Weinert snatched the top spot, and took control of the ten minute moto.

After only two laps, it was an early ending to Scott‰Ûªs race ‰ÛÒ with his Husqvarna machine unable to be restarted, forcing him to DNF, allowing Rhys Budd (KTM) and Bailey Malkiewicz to slot in to second and third behind Weinert.

By the time the last lap board came out, Weinert looked set to take the race win, however disaster struck with half a lap to go, when Weinert collided with a lapper, handing Malkiewicz the race win ahead of Regan Duffy in second and Budd in third.

As the little tackers headed out for their second 65cc Solos 7-u9 years class finals race, KTM mounted Tyler Collins took the holeshot before pulling an impressive lead on his closest threat Reece Weissel.

After one lap, the focus shifted to the battle for second, with Weissel and Seth Clark proving that deteriorating track conditions was no issue for either. However it was the misfortune of Weissel that allowed Clark to move in to second position, and begin his hunt for the lightening fast Collins.

However the race order behind KTM‰Ûªs Collins would once again change before the conclusion of the seven-minute moto - with Seth Burchell finding his way in to second, and Weissel in third, which is where they would stay until the chequered flag flew.

When the girls lined up for their first final for the day, Chelsea Carter looked to repeat her outstanding form yesterday. With Carter being the first bike in to turn one, KTM‰Ûªs Danielle Foot wasted no time, hunting down Carter, bringing to life an exciting battle for the race lead.

By lap three, only .3 of a second separated Carter and Foot, while Tahlia O‰ÛªHare and Lily Kent held down third and fourth places respectively.

However Carter was unable to stop the freight train of Foot, who managed to move in to the race lead after a short time, and stretch the lead out to eight seconds with one lap to go.

At the conclusion of the ten-minute moto Foot crossed the line victorious, ahead of O‰ÛªHare who was handed second when Carter went down, while third went to Kent, in her first big comeback to racing.

For a complete and more detailed list of results from the KTM Australian Junior Motocross Championship in Bunbury, CLICK HERE