Osby Leads the Way For Raceline KTM in Auckland 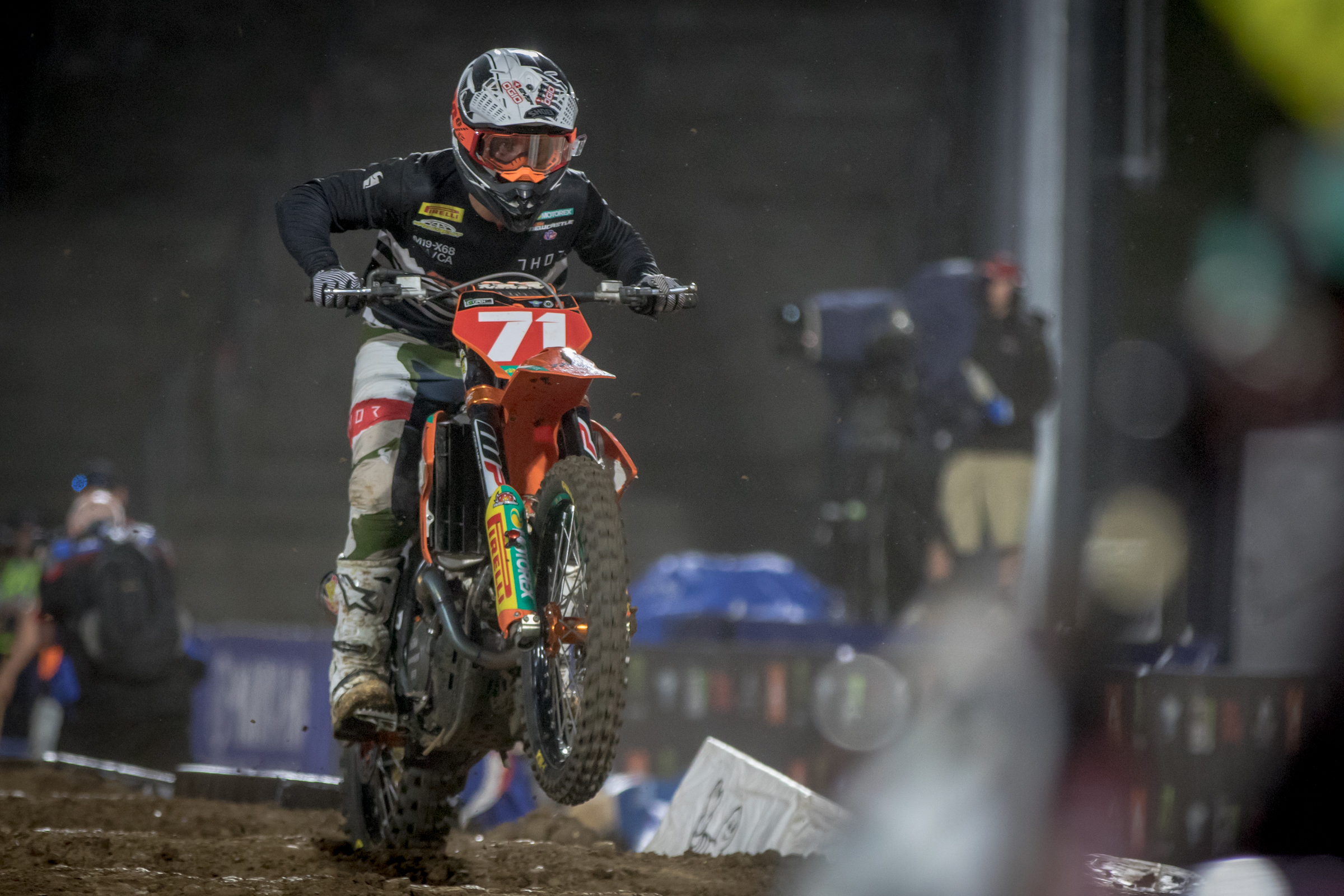 Josh Osby on his way to the round win in Auckland and extrending his points lead heading into the final round in Melbourne - Credit: Aaryn Minerds
Raceline KTM Thor and Josh Osby emerge as winners in SX2 at round four of the Australian Supercross Series, taking place at the SX Open Auckland's Mt Smart Stadium, NZ. Regan Duffy Finishes in seventh overall in SX2, with Henry Miller landing in the top ten with ninth overall in SX1.

Josh Osby continued to impress in 2019, looking comfortable early on the technical and at times slippery, Auckland track. Osby qualified out of the days timed sessions in third position.

In heat race two, Osby climbed through the field after the early race chaos to secure fifth position and guarantee a direct transfer to the main events.

In the opening Main event of the Triple Crown format, Osby played a role in the top riders switching positions in seemingly every turn. Progressing from third to leading the field in the early laps, Osby then weathered attacks from fellow countrymen Mitchell Oldenberg, before pulling away to win the race. Osby celebrates victory at SX-Open Auckland - Credit: Aaryn MInerds
In the second Main Event in SX2, Osby again factored into the early race lead, but with many riders electing to take the "Joker lane" in this race, the positions changed frequently at the front of the field. After a late race fall, Osby would use the Joker Lane himself at the perfect time to clinch a crucial second position in the race at the chequered flag.

In Main event three, a third position was more than enough to give Osby the overall win at round four, maintaining the Championship Red Plate and extending his lead over second place to four points heading into the final round.

"Tonight was great, in previous rounds I had been too cautious at times and tonight I really went after it and found the right balance between consistency and intensity. It was crazy out there at times and the shortcut lane really factored into the second main event.

"But to leave here with the red plate and more points was our goal, I can't wait for the final round in two weeks" said Osby. 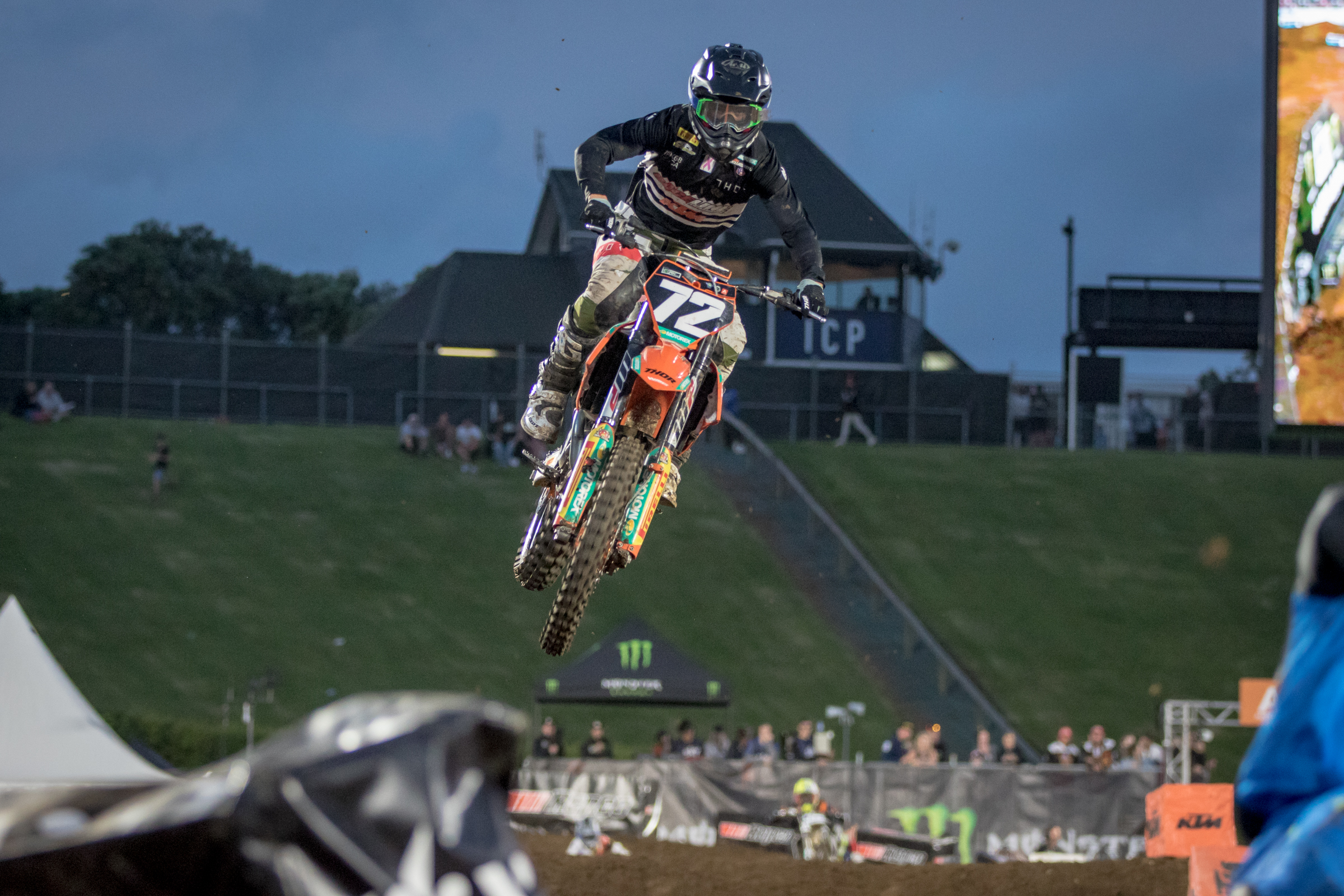 Regan Duffy continues to impress in his first year in the senior ranks - Credit: Aaryn MInerds
Regan Duffy qualified seventh out of the second heat race, two positions behind his team mate Osby. Choosing an outside gate in the Main Events, Duffy eventually placed in eighth position, before backing up his opening race performance with a sixth and tenth place respectively in the next two Main Events, giving the Supercross rookie another top ten finish with a seventh overall.

"Tonight was up and down for me, I had great starts but got stood up in the first turn a few times coming from the outside and had to play catch up from there.

"The second main was good with sixth position, I'm enjoying my rookie season and learning from these guys every round" , commented Duffy. 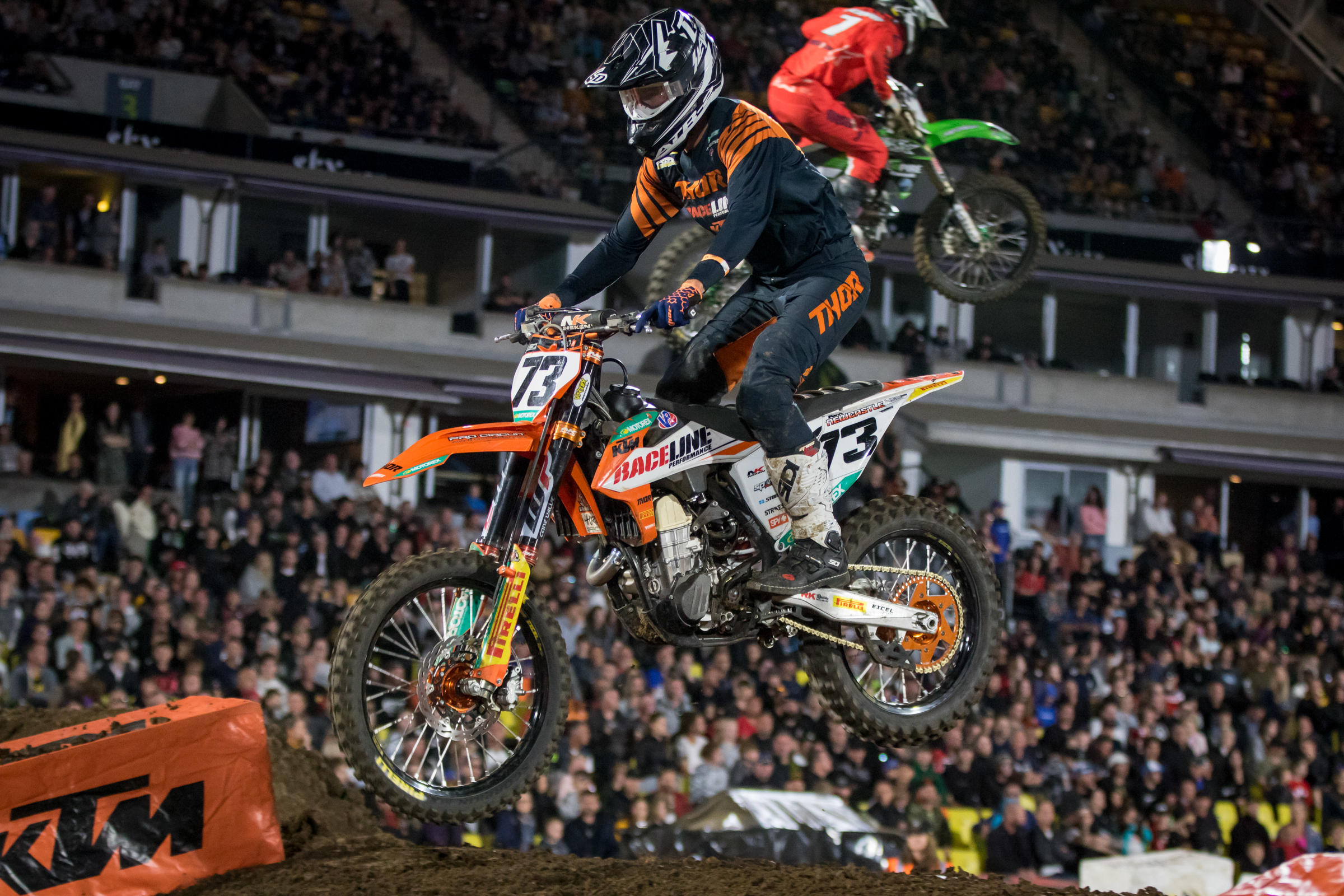 With more bike time aboard his Raceline KTM, Henry Miller is starting to show what he is really capable of - Credit: Aaryn MInerds
In SX1, Henry Miller posted a ninth overall result in the international field, with his results on paper certainly not showing his speed and track position throughout the night with flashes of brilliance at times, running up front early with the worlds best.

With ninth, eighth and fourteenth positions in the three Main Events, a fall late in race three cost Miller a shot at a better overall position.

"Tonight was a step in the right direction for the team and I. I think we rode better than the results showed, it was tough out there with the track being slippery and the Triple Crown Format.

"Without the mistake in the final Main Event we were on for a stronger finish, but that's racing and I'm thankful for the opportunity to be racing these awesome events with the team. I'm looking forward to the last round" said Miller.