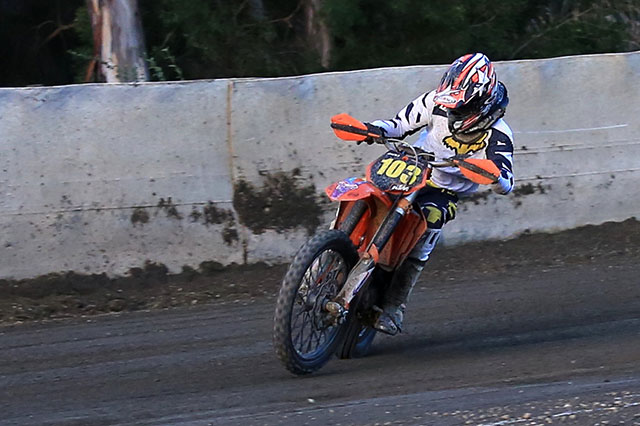 Last weekend‰Ûªs 2016 Honda / Tumut Motorcycle Accessories New South Wales Junior Track Championship meeting showed that the future of the sport is in good hands as the young riders turned on plenty of excitement and drama.

A rider scoring an all-the-way win was rare, particularly in the deciding races of all of the 12 championship classes which produced racing of the highest quality.

Eight different riders shared the class wins, but even outside of the placegetters there were plenty of riders who could be well pleased with their efforts as they improved on previous showings.

Individual star was Singleton rider Billy Van Eerde who blitzed his rivals in three classes in the ultra- competitive 13 to Under 16 s age group.

The win by Bryce Holmes in the other 13 to Under 16 class was significant for two reasons as he was one of the contingents of interstate riders who made the trip worthwhile, and he is also one of a handful of riders nearing the end of their time in junior competition.

Coffs Harbour‰Ûªs Bailey Spencer signed off with a rostrum place while Mackenzie Childs, Sam Laguzza and Jake Farnsworth did not get among the placings but will take great confidence in to their senior racing.

Taree rider Jack Hyde is just 14 but managed three placings in an impressive weekend of riding.

Central Coast Junior Motorcycle Club member Senna Agius was the standout for the host club winning two classes, while Talon Cardinale (twice) and Jacob Roulstone were among the placegetters.

Forbes rider Tom Drane also claimed a double before his family headed back to their flooded home town after the meeting.

Besides Bryce Holmes from Melbourne, Brisbane rider Rowan Millar also made the trip worthwhile with a class win.

Add in placegetters Max Berry from Melbourne and Damon Burke from Mildura, as well as Brisbane riders Max Whale and Cyshan Weale and there numerous trophies going interstate.

Other winners came from the Hunter region with Carter Thompson, Cameron Dunker and Ryan Smith all stepping on to the top of the rostrum.