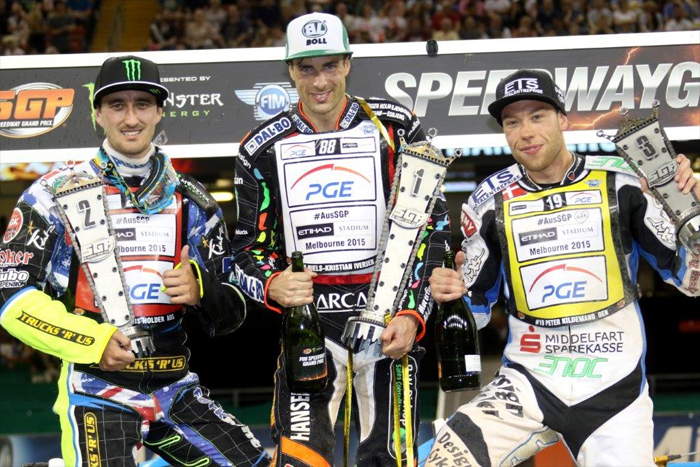 Danish champion Niels-Kristian Iversen insists the big races still bring the best out of him after he bounced back from his Monster Energy SWC heartbreak with Adrian Flux British FIM Speedway Grand Prix glory in Cardiff.

Iversen topped the rostrum in front of over 40,000 fans at Cardiff‰Ûªs Millennium Stadium on Saturday night after scorching around Chris Holder on lap one to win the final in spectacular style.

His compatriot Peter Kildemand was third, while Britain‰Ûªs World Championship leader Tai Woffinden must wait for his first home win after finishing fourth.

NKI‰Ûªs triumph at world speedway‰Ûªs biggest event underlines the incredible highs and lows of the sport.

Just three weeks ago, the Danish national team skipper suffered the agony of being excluded from heat 20 of the Monster Energy FIM Speedway World Cup Final at Vojens on June 15, when he had a rush of blood and clattered Poland‰Ûªs Przemyslaw Pawlicki in a last-heat decider for gold with Sweden.

Tonight his sublime swoop around Holder paid off big time. Even though he knows the Danish disappointment will take some getting over, Iversen was glad he delivered again when it mattered.

‰ÛÏI haven‰Ûªt done that many Grand Prix finals, but I‰Ûªve got four wins from eight. It just gives me that little bit extra when I get to one. It brings out the best in me. A big race brought a little bit too much out of me in the World Cup. I think that one will haunt me until the end of time!" Iversen said.

‰ÛÏThat‰Ûªs the way it goes. You win some, you lose some. You have to do your best. This one worked for me and it‰Ûªs a great feeling.

‰ÛÏI knew I had the speed after the semi-final when I came from last to second, and I put myself in a good position in the first corner. Then I had a chance.

"It was all or nothing. I would have been pleased to get to the podium after how the night went, so to win it was even better.

‰ÛÏI knew when I hit the front that I had it. The speed was there and I just had to keep it on. It was fantastic; a great feeling.‰Û