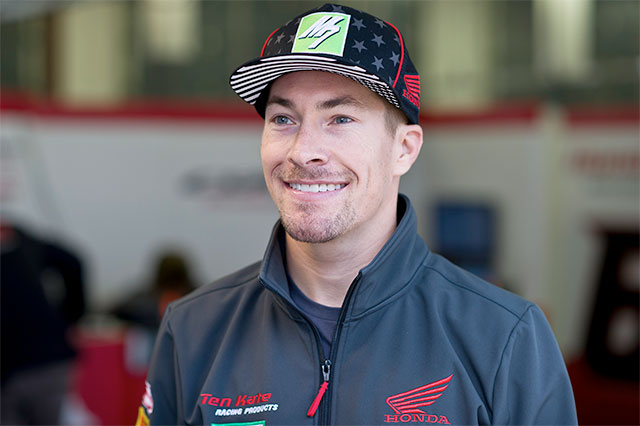 Hayden will ride Miller‰Ûªs Honda RC213V machine in this weekend‰Ûªs 23-lap MotoGP encounter at the 5.1km Motorland Aragon track, which hosts round 14 of the World Championship.

Australian rider Miller is unfit to participate in this weekend‰Ûªs action while he continues to recuperate from fractures in his right hand, which was an injury he first picked up in a high speed fall during the Warm-up session at the Red Bull Ring in Austria in mid-August.

Miller bravely raced to a 16th place finish in Silverstone‰Ûªs British Grand Prix and then attempted similar heroics at the Misano World Circuit Marco Simoncelli last time out. Miller courageously rode in practice and qualifying in San Marino but the constant pain meant he withdrew ahead of the race.

Additional medical checks carried out immediately after the San Marino race revealed Miller has been riding with two fractures in his right hand.

The constant stress on the hand while riding has slowed the healing process and Miller, in consultation with HRC and the team has decided the most appropriate course of action is to miss this weekend‰Ûªs Motorland Aragon encounter.

It is hoped the opportunity to take a lengthy period of rest and recuperation will give the 21-year-old the best chance possible of being fit to commence the gruelling flyaway triple-header in Japan next month.

Hayden brings a wealth of experience to Team Estrella Galicia 0,0 Marc VDS for this weekend‰Ûªs race, which includes a podium in the inaugural Motorland Aragon race back in 2010.

The popular American started 216 races between 2003 and 2015 and claimed three victories and 25 other podium finishes. The highlight of the 35-year-old‰Ûªs career was undoubtedly his World Championship success in 2006 when he defeated Valentino Rossi in a nail-biting final round decider in Valencia.

‰ÛÏFirst of all I want to wish Jack a speedy recovery," Hayden said. "He is a buddy of mine and he is a rider I believe in a lot, so I hope he can get healthy as quickly as possible to show the high potential we all know he has got. He just needs to get his body right so he can perform.

"This is an unusual experience for me because I‰Ûªve never been a stand-in rider before," he continued, "But I have a good relationship with Honda and when the idea first came up they were behind it and Ten Kate gave me their blessing, so it is nice to go and help out another Honda team. For me it just a chance to go and have fun. I‰Ûªd probably be riding motorbikes anyway and I would definitely be watching the race on TV, so I might as well show up and have some fun.

"I know MotoGP is not a place that‰Ûªs always easy to have fun because the level is so high but I‰Ûªve got a lot to learn and it won‰Ûªt be a walk in the park. I haven‰Ûªt ridden the bike and there are different tyres and electronics but I‰Ûªve got a lot of experience and I get another shot at MotoGP, which is great for me personally. I want to thank Team Estrella Galicia 0,0 Marc VDS for the opportunity and Ten Kate and my sponsors who all made it happen and I will try and do them all proud."

Michael Bartholemy: Team Principal, added, "Obviously we'd have preferred Jack to be racing in Aragon, but it's the racing that is stopping the two fractures in his hand healing properly. It makes sense to have him sit out this race in a bid to recover ahead of the three overseas races, one of which is his home race in Australia.

"I'm looking forward to welcoming Nicky into the team and I want to thank Honda and Ten Kate for releasing him to ride this weekend. As a former MotoGP World Champion for Honda he brings with him a wealth of experience, which will be critical given the steep learning curve he faces with a new bike, new tyres and new electronics. I am sure he will do a stand up job for us. Tito had a tough time in San Marino, but his resilience is one of his strongest points and I fully expect him to bounce back and continue improving this weekend, on a track at which he's enjoyed a lot of success in the past."