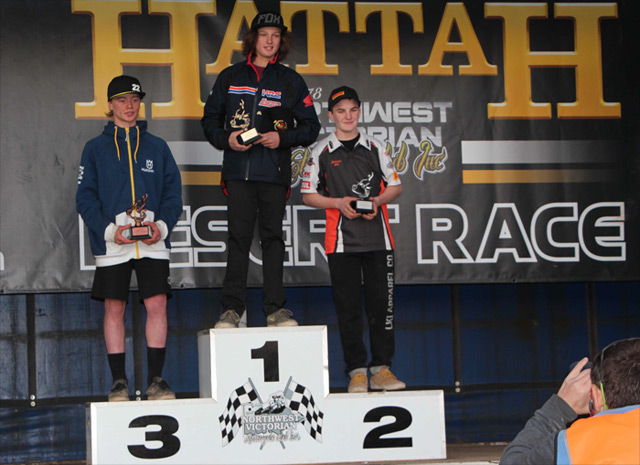 After only a handful of weeks back on the motorcycle since returning from injury BCP Pro Circuit Honda Junior Development rider Morgan Fogarty has taken out the annual Hattah Desert race in the big wheel 85cc to 150cc class in convincing style on board his Honda CRF150R.

The kid from King Lake in Victoria won by a substantial margin after leading from start to finish.

Going one better than his second placing last year, Fogarty attributes a lot of his win this year to the 150cc machine and how easy it was to ride for longer periods of time.

"We only really added a long range fuel tank to the bike for this year's Hattah and that's about it," said Fogarty. "I'm stoked that we managed to take it out this year and it feels really good to get another win under my belt after being off the bike for a good couple of months.

My bike this year was just a lot easier to ride at that fast pace as the race neared the finish. I was able to keep pushing and kept up consistent lap times. My team manager Lee Hogan showed me during the week prior how to tape my hands properly for an event like this and I didn't get any blisters at all."

Fogarty impressed one day earlier by not only qualifying fastest in his class but well up in the top 20 overall against 125cc and 250cc machines.

The Hattah Desert race is recognised on the National calendar as a major event for teams Australia wide and gains enormous media and spectator support alike.

"Morgan continues to impress me with his will to win and is doing some amazing things on his CRF150R. I know he loves mixing it up with a little bit of desert racing to complement his motocross and I'm really proud that he achieved his goal of taking the win this year," said team manager Lee Hogan.

Morgan Fogarty along with his BCP Pro Circuit Honda team mate Taj Marshall will line up this weekend for the Rosebud round of the Gippsland Centre MX Championships.