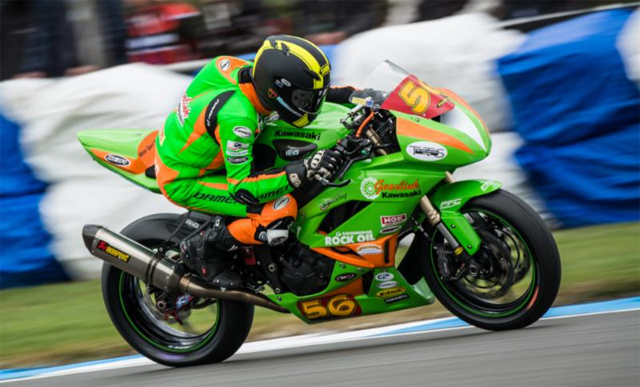 It was another good weekend for British Pirelli National Superstock 600 rider Mark Wilkinson at Donington on the Weekend as he raced to his best ever result since making the move to the British Championship.

With the poor weather on Friday the main qualifying session was during the dry on Saturday where Wilkinson qualified in ninth place.

When racing got underway Wilkinson made a competitive start to the race before a race long battle with 10 riders all fighting for 5th position. The likeable young Aussie kept a cool head and made his way to the front of the group finishing sixth before being elevated to 5th position and in turn securing his best result of the season so far and also maintained his season long run of point scoring finishes.

"It was a really good race and I enjoyed riding in it and being a part of a really good scarp and tidy battle for sixth." Wilkinson stated. "We had a good race and we kept making a few passes on each other but it was good tidy racing, I later found out I was promoted to fifth which I'm over the moon with.

"Everything has been great and I've really gelled well with the Gearlink Kawasaki team and the results are definitely coming on good. I'm really looking forward to Silverstone in a few weeks time," he added.

Team Manager Michael de Bidaph was once again pleased with his Australian rider.

"Mark once again showed his form and rode a very solid race to finish sixth; he was promoted to fifth after an exclusion of a rider which helped him secure his best result of the year." Bidaph stated.

Top Image: Mark Wilkinson on his way to his best finish in the British Superstock 600 class
Credit: www.carlyrathmell.com