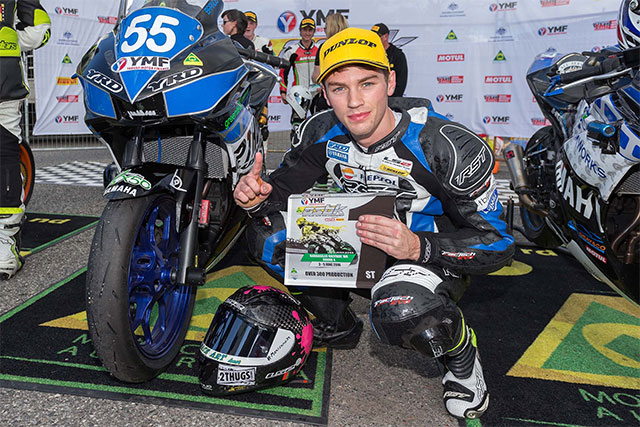 It was Brandon Demmery‰Ûªs consistency that paid off today, racing to the overall Production round win, while in the Honda Moto 3/125 GP category it was Ben Leonard who had reason to celebrate at Round 4 of the Yamaha Motor Finance Australian Superbike Championship presented by Motul Pirelli at Barbagallo Raceway.

When the stacked Production class lined up on the grid for their second race of the weekend this morning, there was tension in the air, with fastest qualifier Alderson looking to redeem himself after a disappointing end to race one yesterday, while 2 Thugs‰Ûª Demmery was carrying significant confidence in to race two after collecting the opening Production win yesterday.

Despite Alderson launching off the grid and into turn one with the lead, it took no time at all for Demmery to assert himself, snatching up the top spot and leading the pack on to the straight after two laps.

However, Alderson was not prepared to settle for second best, and after the first split on lap three, had moved in to the race lead once again, ahead of Tom Toparis in second, followed by Demmery in third.

When riders had completed six laps, Alderson had stretched out his lead to a comfortable 0.918 of a second ‰ÛÒ leaving the battles for the remaining top positions to unfold behind him. And battle they did. Demmery, DB Racing‰Ûªs Reid Battye and Toparis all putting on a performance for ASBK spectators - the trio slip streaming and switching positions numerous times throughout the race.

In the final stages of race two, the running order saw Alderson continuing to lead from Battye who had edged out Demmery and Toparis to move in to second, while Yamaha mounted JDR Racing‰Ûªs Jack Dawes came from no where to launch in to an impressive fourth position.

But it was on the final lap for the Production class, that it all went pear shaped for Battye ‰ÛÒ the second placed rider going down in the final turn before the finish straight, marking an early end to race two for the Kawasaki mounted star, who was forced to leave the track in the hands of Racesafe.

So when the chequered flag flew, it was Alderson who secured ultimate redemption, snatching up the second race win for the Over 300cc Production class, while Demmery crossed the line in second. Up to 300cc competitor Drew Sells (Race Centre) completed race two by finishing in third, while Dawes put on an outstanding performance to race his Yamaha R3 to fourth, followed Sam Condon who finished in fifth place.

In the third and final race for the day for the Production class, Yamaha‰Ûªs Alderson edged out tough competition from Demmery to take the holeshot, and within two laps, Alderson looked unstoppable ‰ÛÒ stretching out his gap on second to an impressive 1.245 seconds.

After three laps, the running order saw Alderson with a commanding lead, followed by a hard charging Demmery and Sells who continued to go head to head in second and third positions.

With Alderson checked out, spectators got their excitement from watching the battle between Demmery, Sells, Dawes and Toparis unfold ‰ÛÒ the four riders all chopping and changing positions, leaving the crowd guessing as to who would finish on the podium.

By lap seven, Dawes made his way past Demmery to move in to second position, while Sells dropped back fourth, but not letting the front runners out of his sight.

However, the fight for second position was in now way over, and with two laps remaining, Demmery, Dawes and Sells were all well within striking distance of a spot on the Production podium.

But when race three wrapped up, no one could take the attention away from a victorious Alderson, who collected his second victory for the weekend from Demmery, while Sells and Toparis wrapped up race three in third and fourth places respectively.

Dawes, who challenged for a podium position earlier in the race was forced to settle for fifth, while Justin Hall, Paul Young and Aidan Hayes all concluded the final race of the day inside the top ten.

With points from three races combined, Demmery concluded round four as the Over 300cc Production winner, while in the Up to 300cc category it was Sells who collected the round four win, and in the Women‰Ûªs Production class, Jessica Boujos left Barbagallo Raceway today victorious.

‰ÛÏWe decided that after the first race it was pretty safe for us to finish second in the next two, and to take a handy points lead in to the next round feels good,‰Û