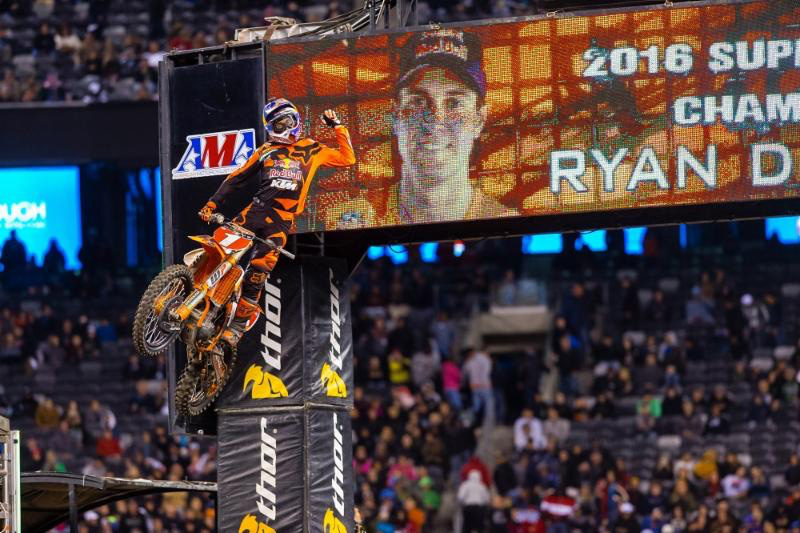 Fresh off clinching his second straight, and third-career 450SX Class title, Red Bull KTM's Ryan Dungey will enjoy a victory lap of sorts as he leads Monster Energy AMA Supercross, an FIM World Championship, into Las Vegas for the 17th and final race of the 2016 season this Saturday, May 7.

Accompanying the action of the 450SX Class will be the crowning of a pair of Regional 250SX Class champions, as both the Eastern and Western Regional title fights have yet to be decided.

- Las Vegas first became a part of Monster Energy Supercross in 1990 and has served as the final race of the championship for the past 21 seasons (no Las Vegas race in 1996).

- All 25 Monster Energy Supercross races in Las Vegas have occurred in Sam Boyd Stadium. It is one of just three stadiums, along with Anaheim‰Ûªs Angel Stadium and The Dome in St. Louis, to host every race in a host city for more than two decades.

- Sam Boyd Stadium was the site of the first-ever Monster Energy Supercross win by a four-stroke motorcycle back in 1997, igniting the current technological era of the sport.

- Las Vegas spawned the creation of the East/West Shootout for the 250SX Class in 1997, an inter-regional battle to crown the best 250SX rider in Monster Energy Supercross for the last 19 seasons.

- The first 450SX Class race held in Las Vegas was on March 17, 1990. Jeff Matiasevich won on a Kawasaki for his one and only premier class victory.

- This will mark the 26th time the gate will drop on a 450SX Class race in Las Vegas.

- There have been 13 different winners in 25 Las Vegas races. A different rider took the win each of the first seven races until Jeremy McGrath became the first repeat winner in 1998.

- McGrath went on to win three consecutive seasons at Sam Boyd Stadium from ‰Ûª98-‰Ûª00. His last Las Vegas win in 2000 was the finishing touch on his seventh and final championship-winning season.

- McGrath‰Ûªs four Las Vegas wins ties him with Chad Reed for the most all time. Ryan Dungey and Ryan Villopoto each have three Las Vegas wins apiece.

- Dungey will look to cap off his championship-winning 2016 season by emerging victorious for the fourth time in Las Vegas, joining McGrath and Reed as the winningest riders in Sin City history.

- Doug Henry piloted a Yamaha YZM400F to the first-ever four-stroke victory in Monster Energy Supercross history in Las Vegas on May 17, 1997.

- Every 450SX Class Champion since 1990 has at least one Las Vegas victory to his credit.

- The first 250SX Class race held in Las Vegas was on March 17, 1990. Jeremy McGrath won on a Kawasaki. It was the first win of what became the most successful career in Monster Energy Supercross history.

- McGrath went on to win the first three 250SX Class races in Las Vegas and remains the winningest rider in class history at Sam Boyd Stadium.

- From ‰Ûª90-‰Ûª95 Las Vegas was a stop of the Western Regional Championship before becoming the home of the East/West Shootout in 1997. Both regions have raced at Sam Boyd Stadium ever since.

- From ‰Ûª11-‰Ûª14 Las Vegas also served as the final race of both the Eastern Regional and Western Regional Championship in addition to the East/West Shootout, producing three separate Main Event winners in one night of racing.

- In the 19-year history of the East/West Shootout, the Eastern Region has the edge in total victories, 10-9 over the Western Region.

- A regional 250SX Class champion has gone on to win the East/West Shootout that same season nine times in 19 years, including five of the past seven seasons.

- Justin Barcia is the only rider to win in Las Vegas twice in one season. He won the Eastern Regional finale and the East/West Shootout during the 2012 season.