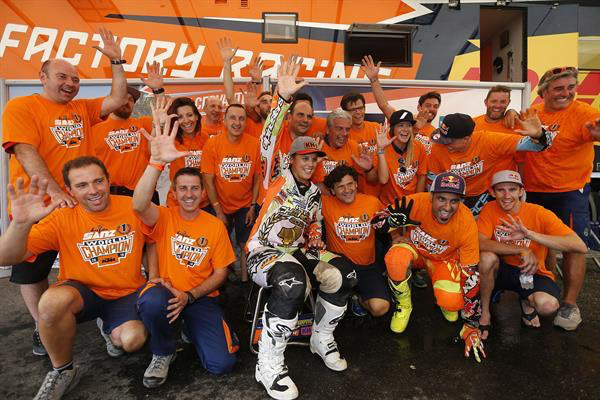 KTM factory rider Laia Sanz of Spain on Sunday added yet another World Championship trophy to her considerable collection when she wrapped up the title in the EnduroGP EW class with a 2-1 result in the final round of the 2017 season.

KTM factory rider Nathan Watson also finished on a high note to be second in the fight for the E1 title.

Riding in Cahors, France, Laia Sanz, who is also a member of the KTM Rally Factory Racing Team, went into the round knowing it was going to be a hard fight. She finished second to Germany‰Ûªs Maria Franke on Day One, trailing by 2.18 seconds to go into Sunday‰Ûª competition on her KTM 350 EXC-F with a four-point lead in the title fight.

She then pulled out all the stops on Sunday, but not without spirited competition from Franke (also KTM). Sanz won the day by just five seconds and secured the title by seven points. It was a reward for a difficult start to the season and having to overcome injury problems.

‰ÛÏThis was a difficult one." Sanz said. "At the beginning of the season in Sweden I almost lost the championship but I fought hard and I think I am really strong in my head and I believed in myself.

"This weekend was a big fight with Maria (Franke) and it was good to finish with a win.‰Û