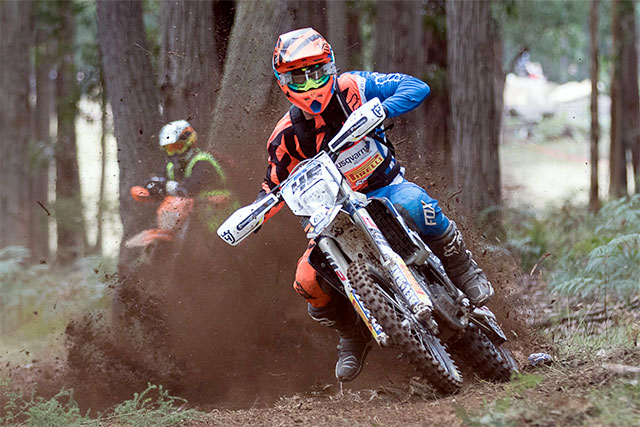 Husqvarna Australia Off-Road team leader Lachlan Stanford has powered off to a strong start in the Yamaha Australian Off Road Championship opener at Rawson, leaving the venue in south-eastern Victoria with a share of outright second place, in the nation‰Ûªs premier off-road championship.

Stanford fired his powerful Husqvarna FE 501 to his highest cross-country result - third outright in Saturday‰Ûªs XC behind Daniel Milner and Lyndon Snodgrass, and then repeating the dose on Sunday as he shared the sprint round podium with Milner and Josh Green.

Sunday‰Ûªs performance also moved Stanford into a share of the E3 class lead.

‰ÛÏIt was definitely a good kickoff," Stanford declared. "I got a PB in the cross country, and for racing in Victoria too, because down here isn‰Ûªt always nice to me. Saturday was pretty tough; I tried to catch the KTM boys, but I just didn‰Ûªt have it in me.

"The sprints today were alright, but I had two crashes and the times were tight that just messed me up. I only missed second by 0.5 of a second from Greeny, so it could‰Ûªve easily been better. That‰Ûªs a little frustrating, but my bike was great for the whole weekend.

"It was tight and technical so you‰Ûªd expect a 500 to make it harder, but the FE 501 worked really well. The team was awesome, the fuel stop was so fast I didn‰Ûªt have time to get a drink, and Amy was great on the pit board as well. It was a good weekend - I really enjoy the team and Broc as a team mate. Everything‰Ûªs working really good this year," Stanford concluded. 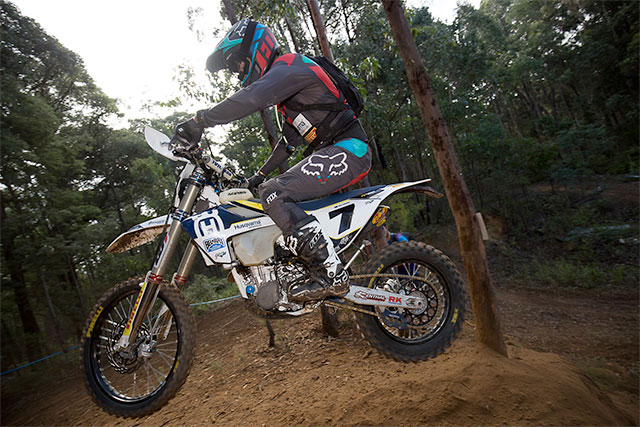 Broc Grabham encountered obstacles and wasn't quite feeling it on the day. Credit: John Pearson
Rawson was a tougher nut to crack for Husqvarna team mate Broc Grabham, who suffered a poor start in the cross country, then struggled to read the soil type (at the pace of an AORC Pro) and couldn‰Ûªt quite find his groove on his way to fourth in class and 10th outright.

He‰Ûªd made little headway today, when in the fourth sprint he suffered a minor technical problem which he was able to fix mid-lap. However, it unfortunately cost him time and affected his result at the end of the day, and he dropped outside the top-20 outright.

‰ÛÏI want to forget this weekend. I struggled off the start in the cross country, and then just getting past people was hard in the conditions," Grabham lamented.

"I‰Ûªd get held up by crashing lappers who‰Ûªd block the track and then lay there for a bit. Today wasn‰Ûªt going that great for me either. I was still in the top-ten time-wise, but then I had a technical issue on the third last lap and lost four minutes. The terrain here was so different to anything I‰Ûªm used to that I just struggled to read the available traction. It sort of threw me out a bit. But I‰Ûªll come back faster next time.‰Û 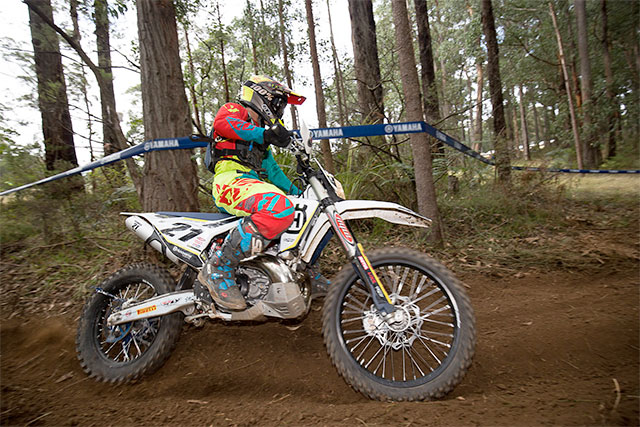 Fraser Higlett took a 2nd and a 15th in the Transmoto 19 and Under class. Credit: John Pearson
Brisbane 17-year-old and Husqvarna TE250 rider Fraser Higlett began well in the Transmoto 19 and Under category, with second in class and an impressive 15th outright on the opening day. However, he suffered badly from blisters that made it near impossible for him to hold on as Sunday‰Ûªs track got progressively rougher.

The laconic Queenslander was forced to resort to Super Glue to close the flaps of skin on his hands in order to finish the day today, and miraculously managed to salvage 20th in class and sixth outright.

‰ÛÏYesterday was pretty good and the TE250 was great, I was up there for most of it, then I dropped back to second and just sat there for the rest of the way," Higlett explained.

"I got 15th outright so I was pretty happy with that, but at the end I was getting pretty bad blisters. Today I started off and it just got worse. I couldn‰Ûªt hold on. Worst blisters ever. We used Super Glue and tape ‰ÛÒ which actually worked, but I put a bit too much on apparently, so now I‰Ûªm too scared to take it off! I‰Ûªm just going to see what happens in the next couple of days‰Û_ it‰Ûªll fall off eventually I‰Ûªd say. My goal today was just to finish, and then try and make it up in the next couple of rounds. That‰Ûªs all I can do.‰Û