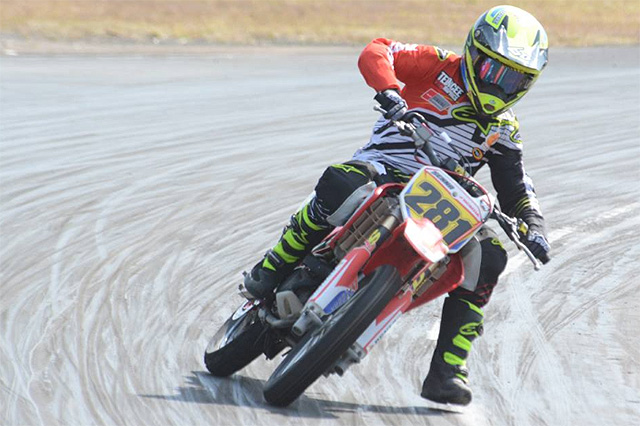 Andrews competed in three classes for the 13 to Under 16s age group and he is the new Australian champion in all of those three classes, the only multiple winner across the 11 championship classes.

In the combined 2-stroke and 4-stroke class Andrews had two wins and a second placing in his heats, before a decisive win in the final ahead of Brisbane rider Cyshan Weale and Newcastle‰Ûªs Tom Edwards.

The 2-stroke class was decided over five rounds with Andrews emerging on top with three race wins, a second and a third. Weale and Singleton rider Billy Van Eerde filled the minor placings.

After winning all his heats in the 4-stroke class Andrews was clearly leading the final when the battle for second place ended in disaster with Weale and Edwards crashing causing the race to be stopped. It made little difference to Andrews who won the re-run ahead of North Brisbane rider Travis Hall and Van Eerde, after a badly shaken Weale was sidelined and Edwards excluded from the re-run.

Home track knowledge obviously played a big factor in Andrews‰Ûª success but his final results were built on consistently brilliant starts that enabled him to ride the perfect line around the track he knows so well and that made life difficult for any challengers.

The other class for the 13-Under 16s, the 85cc 2-stroke / 150cc 4-stroke Big Wheel , produced the closest finish over five rounds with Callan Butcher from Griffith edging out another Riverina rider Kruze Brady of Temora, with local rider Mitchell Bisley third.

There was another Taree success with Hayden Nelson repeating a class win from last year‰Ûªs Championship, this time winning the final of the 85cc 2-stroke / 150cc 4-stroke Standard Wheel class for the 9 ‰ÛÒ Under 11s.

Forbes riders Tom Drane was the top qualifier but was beaten by Nelson in the final with Gold Coast rider Harrison Voight in third.

Overall it was still a good weekend for Drane who won the 65cc 9-Under 13s with a dominant performance, beating local Will Bisley and Archie McDonald from Albury-Wodonga in the final.

Drane also was second-best behind the dominant Jacob Roulstone from the Central Coast who successfully defended the 85cc 4-stroke Modified 10- Under 14s with another local Mitchell Bisley in third place.

There was another victory for the Central Coast club with Senna Agius taking out the 85cc 2-stroke / 150cc 4-stroke Standard Wheel 11 ‰ÛÒ Under 13s winning the final from John Lytras from North Brisbane and Macleay Club rider Andrew Jordan. Top qualifier Ryan Smith from Singleton fell while chasing Agius in the final.

In the Standard wheel class for the same age bracket it was John Lytras taking the honours from Ryan Smith and Senna Agius.

Macleay rider Jayden Holder was dominant in taking out the 65cc 7-Under 9s ahead of clubmate Jack Fritsch and Forbes rider Beau Bailey in the final. Gold Coast rider Jett Kubelka and local Zane Hopkins were among the top qualifiers for the final but they had a coming-together while battling for second place, leaving Fritsch as the most surprised placegetter of the weekend after he only got in to the final via the repechage.

The Kurri Kurri Junior club was also well represented with Cameron Dunker their most successful performer winning the final of the 85cc 4-stroke Modified 7- Under10s with local Will Bisley taking another second place with Glenn Nelson of North Brisbane third.

Overall the weekend was a well-run title meeting that saw honours shared around with nine riders from seven different clubs claiming championship wins.

Fans were again showed how good junior racing can be as the talented young riders showed their wares.