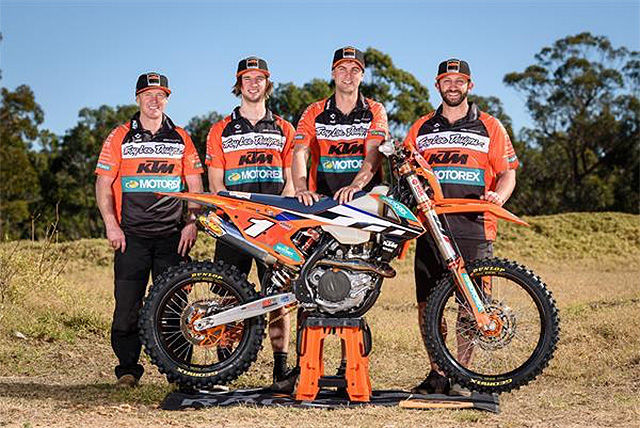 Following a supremely successful year that saw Milner dominate the AORC series with a clean-sweep to capture the Enduro 2 (E2) championship as leading rider outright on-board a 450 EXC-F, the 26-year-old Victorian is scheduled to transfer to Enduro 3 (E3) aboard KTM‰Ûªs class-leading 500 EXC-F next season.

As a former Enduro 1 (E1) title-winner and current E2 champion, Milner has his sights set on claiming an E3 championship for 2018 in a bid to complete the elusive triple-crown alongside the immense outright success achieved during his career.

"I've never had the opportunity to ride the E3 class in previous years, but KTM has such a diverse range of bikes to ride and they're happy for us to ride whatever bike we select, so I thought it‰Ûªd be ideal to choose the 500 EXC-F after riding one in the Hattah Desert Race - it will be good to have a bit more torque in the off-road scene as well," Milner explained.

"Our tracks are a bit more open and more like motocross tracks in the bush, so the 500 will work really well in that environment. Nobody has ever won an E1, E2 and E3 title outright, so it would be a big achievement to do that, but it‰Ûªs another year next year and we never underestimate the challenges ahead. To get the opportunity to sign with KTM again and work with GK, Mick, Harry and then with Lyndon as my teammate, it‰Ûªs nice to have that continuity.

"With the support from the team and all of our sponsors, it‰Ûªs definitely the best team out there for me and to be able to switch to an E3 bike with them, I‰Ûªm really looking forward to it. Looking ahead to the A4DE, it is probably my favourite race in the country, just because of the format, it‰Ûªs such a long race and the tracks are always so good to ride. It‰Ûªs shaping up to be an awesome event from what I‰Ûªve heard and around that area there are a lot of trail riders who will race the event, so that‰Ûªll make it big and I‰Ûªm really looking forward to the event returning to the calendar," Milner concluded.

Milner‰Ûªs switch will effectively see him indirectly trade places with 19-year-old revelation Lyndon Snodgrass, who after clinching this year‰Ûªs E3 title and claiming second in the unofficial outright standings, is due to make the move to the E2 division. In doing so, he will also switch his title-winning KTM 300 EXC two-stroke for a KTM 450 EXC-F four-stroke next season.

"I‰Ûªve been in Sydney testing the KTM 450 EXC-F and it was pretty interesting, switching from the two-stroke to the four-stroke," Snodgrass said. "After getting used to the power differences, it‰Ûªs an awesome bike to ride because it has really smooth power and a heap of torque. I‰Ûªve had a strong year riding the KTM 300 EXC in my first year with the KTM Enduro Racing Team and to finish first in E3 and second outright was an amazing result for myself and the whole team.

"Getting on the KTM 450 EXC-F for next year is exciting, I can‰Ûªt wait for 2018 to start up and to get the AORC series underway! It‰Ûªs good to have the same team heading into next year and having the same teammate in Milner to ride together with again - I‰Ûªm definitely confident with the people around me. With the A4DE getting cancelled this year, that was disappointing and I was really looking forward to it, but we will have to wait until next year‰Ûªs one at Cessnock. It's shaping up to be a really good year ahead."

Alongside their AORC ambitions, both Milner and Snodgrass are also committed to taking victory when the historic A4DE event returns to Cessnock, New South Wales, next April for its 40th anniversary edition. Milner will naturally once again enter as a favourite for outright honours as a former four-time champion between 2012-2015.

The KTM Enduro Racing Team are also due to contest the Hattah Desert Race once again in 2018, following an all-conquering podium sweep this year led by Milner as Snodgrass finished third - all equipped with KTM 500 EXC-F machinery. Plans are also in place to compete in a number of state level, potential one-off races and Transmoto-operated enduro events over the course of the year.

"Obviously, Daniel did an impeccable job with perfect results and we were more than eager to get him signed up as quick as we could to continue into the new year. It was the same case with Lyndon, who did an awesome job and exceeded expectations. The plan is to continue progressing and at least match the success that we had this season. The dynamic in the team is great, everything flows really freely within the team and to have our riders signed already is a big advantage at this point.

"We've already been testing up here in Sydney and deciding on the models that they will both ride, so at the moment, we've set Daniel up on the KTM 500 EXC-F and we're looking to move him into E3. Lyndon was successful on the two-stroke this year and wants to try the four-stroke next, so he's looking at riding the KTM 450 EXC-F in E2 and that's the plan right now. We are already looking forward to another strong season ahead!" Kearney concluded.