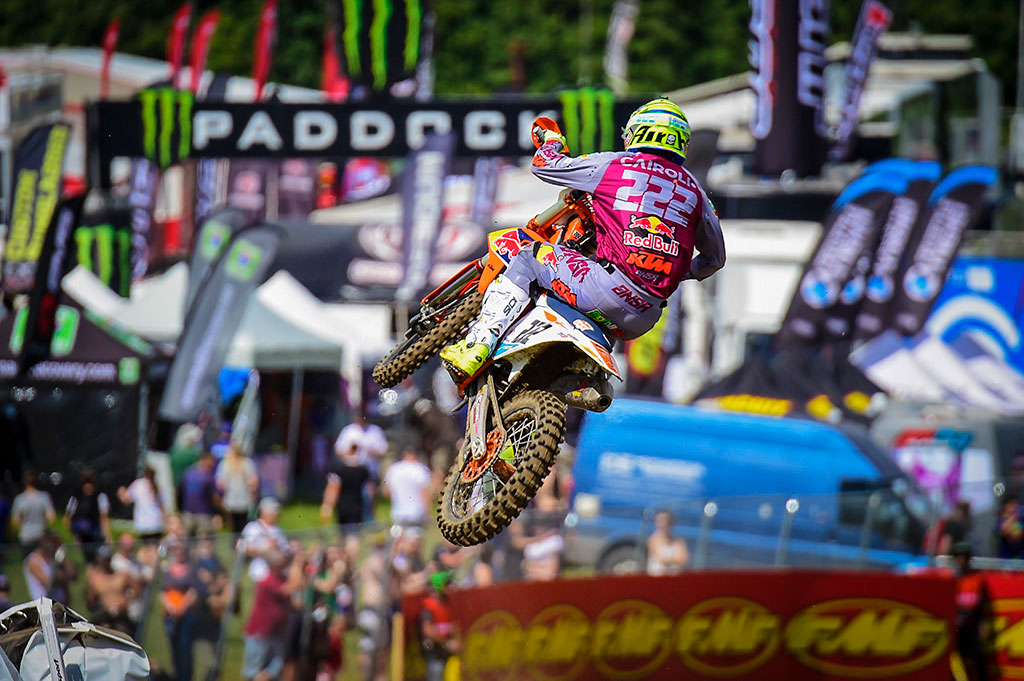 Gifted with warm weather and sunshine the grass lined and hilly British track was epic for the start to round 9 of the 2018 FIM Motocross World Championship.

The circuit, which hosted the 2017 Monster Energy FIM Motocross of Nations Presented by Fiat Professional, was in top shape after rain earlier in the week created perfect soil.


Straight from the start Red Bull KTM Factory Racing‰Ûªs Antonio Cairoli set a blistering pace, with the Holeshot and a clear track ahead he sprinted away from the MXGP field. Just behind Cairoli was another Red Bull KTM but instead of the usual Jeffrey Herlings chasing the #222 it was Glenn Coldenhoff. Herlings however wasn‰Ûªt much further back than Coldenhoff as he sat in 4th position.

Splitting the KTM trio was Team HRC‰Ûªs Tim Gajser who gave chase to Coldenhoff in 3rd. Gajser was on the back wheel of Coldenhoff lap after lap as Cairoli slipped away and Herlings dangerously lingered behind. 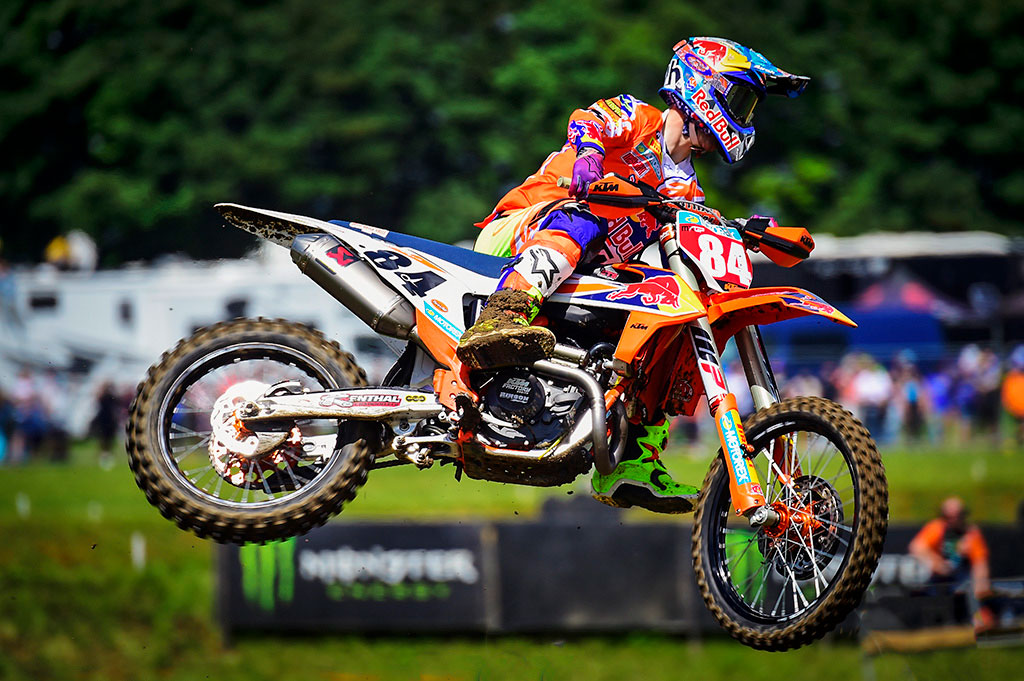 Jeffrey Herlings finished second in the MX1 class after he couldn't match Cairoli's early pace. Photo: Youthsteeam
Running a surprisingly strong qualifying race in 5th and 6th were the two Brits of Max Anstie and Tommy Searle. Anstie led Searle for the first 5 laps before Anstie fell in a turn on the bottom section of the track. The fall dropped Anstie to 9th and moved Searle into 5th briefly.

Only one lap after Searle moved into the top 5 he was forced out of it by Belgian Clement Desalle who was on his way forward from 8th on the first lap. At the same time Herlings started to charge and quickly caught the Honda of Gajser.

On lap 8 Herlings moved to 3rd and on the next lap he continued his charge to take 2nd from Coldenhoff. Cairoli however was too far gone and finished the race 20 seconds ahead of Herlings, Coldenhoff, Gajser, and Desalle. 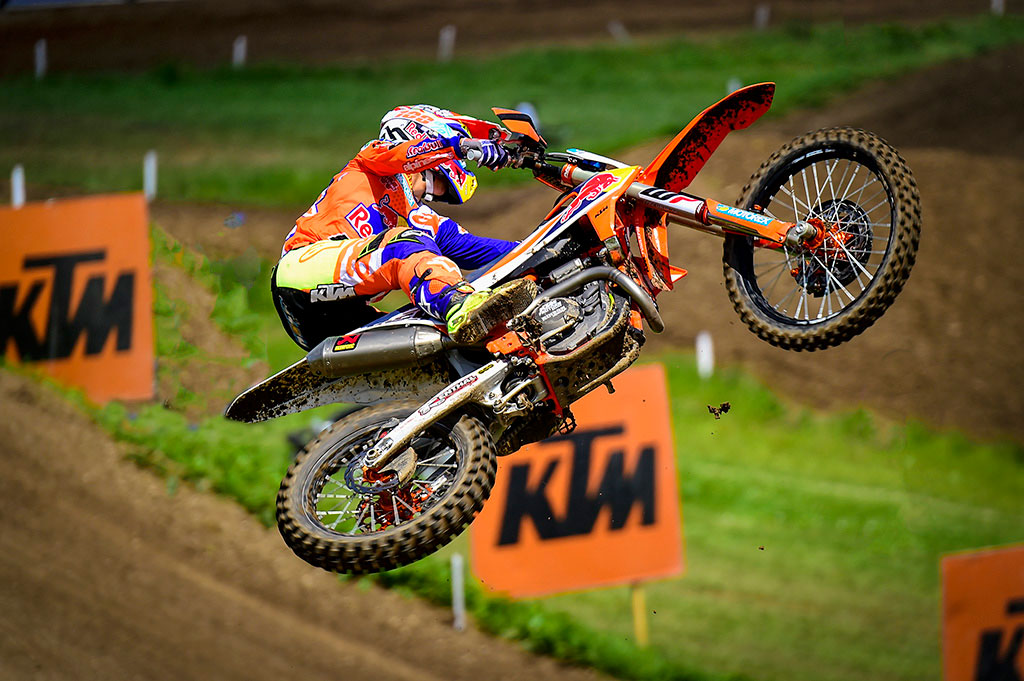 Glenn Coldenhoff made it a KTM sweep in MX1 with third place. Photo: Youthsteeam
‰ÛÏI‰Ûªm really happy because we had again a good start which at the last race was a struggle, hopefully also tomorrow we can have another good start. I rode smooth, and really liked the track and how they prepared it today," Cairoli said.

Tommy Searle finished the race 7th after being passed by Gautier Paulin on the last lap.

‰ÛÏI‰Ûªm feeling better after a few weeks on the bike," Searle said. "This weekend I feel better coming in, I‰Ûªm a lot more confident in myself, and it started off well with a 7th," Searle said.

Max Anstie, who was a star last time he competed at the Basin in the MXoN, added, ‰ÛÏIt is nice to be back in Matterley Basin, I have great memories here from the Motocross of Nations. You know I come here and everybody says I need to do the same as I did at the MXoN and it‰Ûªs hard but at the end of the day I‰Ûªm always going to do my best.‰Û 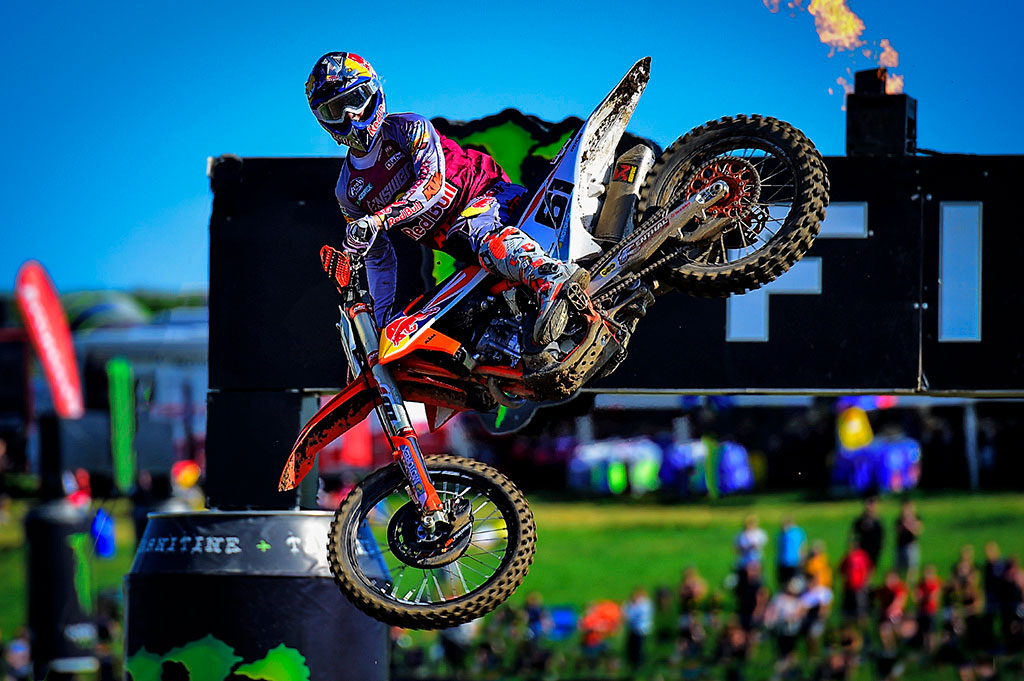 Jorge Prado once again got the better of team-mate and MX2 championship leader Pauls Jonass. Photo: Youthstream
Red Bull KTM Factory Racing‰Ûªs Jorge Prado has clearly been reading the playbook of his older teammate Antonio Cairoli as he took the Holeshot of the MX2 Qualifying Race and checked out from his competitors. Prado rode full of confidence and flow throwing whips and scrubbing jumps all while gaining time on the rest of the field.

Chasing Prado from the first turn was the MX2 points leader and his championship rival Pauls Jonass. Jonass simply couldn‰Ûªt match the pace of Prado and was instead in a battle of his own to hold off Thomas Kjer Olsen.

Olsen was followed by the British fans MX2 favorite, Kemea Yamaha Official MX2‰Ûªs Ben Watson. Watson‰Ûªs good start helped him to close in to within striking distance of Olsen but at about the halfway point Watson had to ride defensive because the returning Team 114 Motorsports rider Hunter Lawrence was coming up fast. 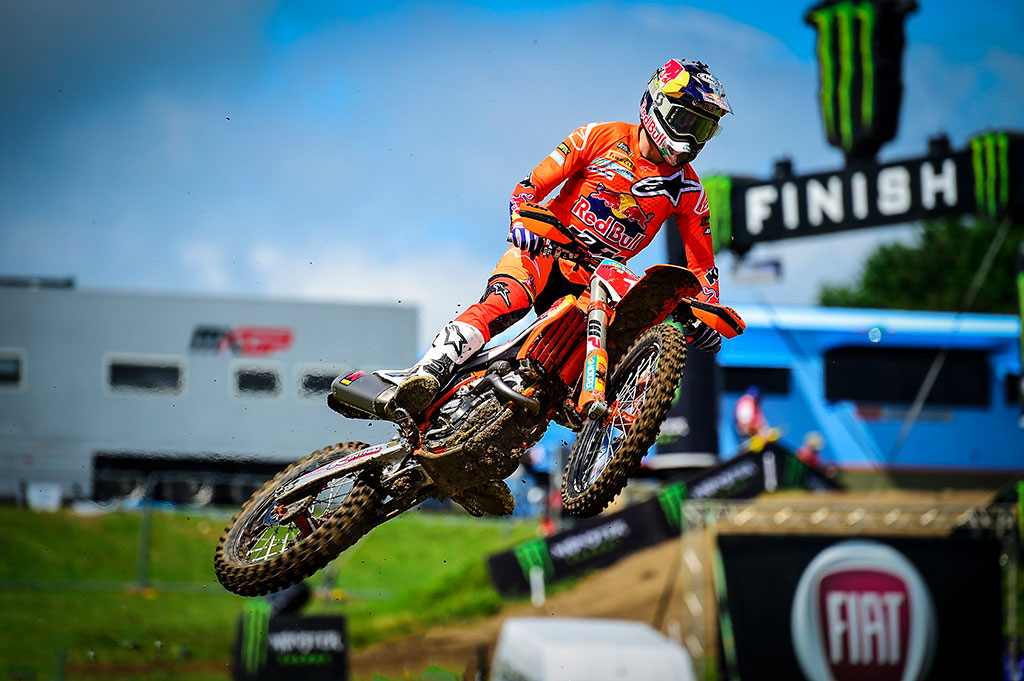 Championship leader Pauls Jonass was second fastest in MX2. Photo: Youthstream
Lawrence was 7th on the opening lap but by the time he made his way to 6th he had a gap up 5th. Lawrence was able to reel in Team HRC‰Ûªs Calvin Vlaanderen and made the pass on lap 6. Also coming up through the field was F&H Racing Team‰Ûªs Jed Beaton after an early fall. Beaton was able to charge his way forward and pass Vlaanderen for 6th with 2 laps to go. Prado went on to take home the win with Jonass second, Olsen third, and Watson 4th.

I was having fun the whole time so I think that was the key for me, I was really relaxed and able to make a gap and control the race, even try some different lines for tomorrow," Prado said.

Home rider, Ben Watson, was happy with a good gate pick but not his riding, ‰ÛÏI‰Ûªm quite happy with the 4th gate pick but I didn‰Ûªt feel so good today, like I wasn‰Ûªt riding like myself, I‰Ûªm not sure if it has to do with the home GP but I‰Ûªm taking it like any other race, I just want to treat it normal and have the same preparation," Watson said. 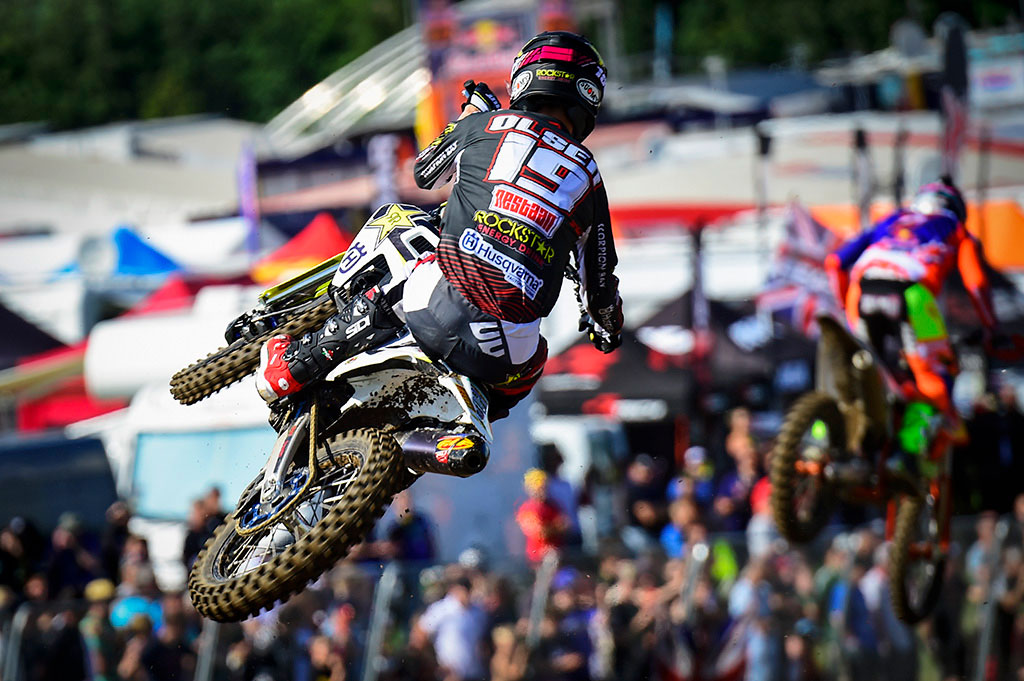