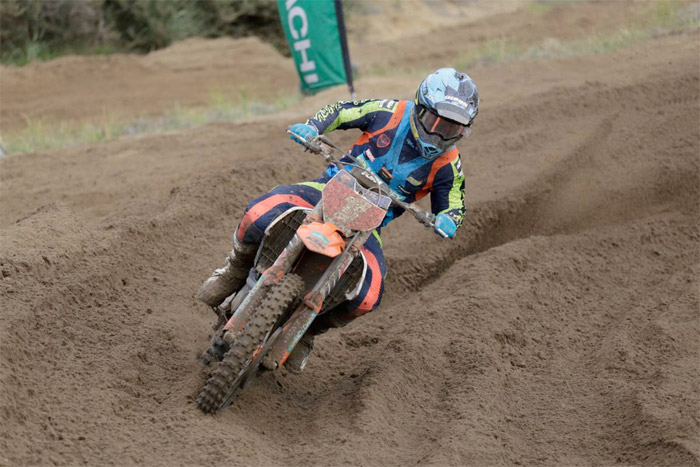 The Thor MX1 class had three gruelling racing in the sand today with KTM Motocross Racing Team‰Ûªs Kirk Gibbs securing another round victory and extending his championship points lead, at round five of the 2016 Motul MX Nationals at Wanneroo in Western Australia.

And when each rider had put down their fastest individual laps, it was Ferris who collected the Superpole cheque with a 1:42.344 lap time, equalising on championship points with Gibbs, and setting up the day as a fight for the red plate.

With the championship lead well and truly up for grabs at round five, thousands of eager spectators watched on as the Thor MX1 class lined up for moto one, and when gates dropped it was Ferris who carried his momentum from Superpole, to snatch up the first MXstore hole shot for the day.

With one lap in the books, it was Ferris who led from Gibbs, Moss, and Wilson Coolair Motul Suzuki‰Ûªs Waters, while Crankt Protein Honda Racing Team‰Ûªs Dylan Long slotted in to an impressive fifth position ahead of KTM‰Ûªs Dobson in sixth.

With races at Wanneroo being a 20-minute dash, any mistake would prove to be crucial. With that known, Ferris took to the sand like a champion, looking smooth and consistent out in front after four laps, while Gibbs continued to chase his tail just ahead of Moss.

By the time the Thor MX1 class reached the half way mark in moto one, the running order saw no changes, with CDR Yamaha‰Ûªs Ferris continuing to lead from Gibbs and Moss, while Waters and Long completed the top five standings.

When the Thor MX1 competitors received the last lap board, CDR Yamaha‰Ûªs Ferris was well and truly in the box seat to collect the race one victory, while Gibbs continued to attack the deep sand and close the gap in second position ahead of Moss in third.

And when the chequered flag flew, despite a minor mishap with a lapper causing Ferris to go down, he remounted and did exactly was required to collect his first race win for the weekend, crossing the line in first position only a bike‰Ûªs length ahead of Gibbs in second, while Moss wrapped up race one in third. Suzuki mounted Waters and Honda‰Ûªs Long concluded race one in fourth and fifth places respectively.

When race two kicked off, once again it was CDR Yamaha‰Ûªs Ferris who launched off the start and in to the early race lead, followed by his closest opponent Gibbs and National Pump Monster Energy Kawasaki‰Ûªs Moss in third.

After two laps, Ferris had pulled five seconds on KTM‰Ûªs Gibbs, checking out on the MX1 field and allowing the battles for remaining positions to happen behind him. Gibbs continued to circulate in second place, only narrowly holding back hard charging Moss and Waters who held down third and fourth places respectively.

As the Thor MX1 class reached the 10 minute mark, the running order saw Ferris dominating in the lead position, from Gibbs, Moss, Waters and Mosig. Honda mounted Long was just outside the top five in sixth, followed by Dobson, Law, Wilson and Wright who completed the top ten standings.

As moto two approached the closing stages, Wilson Coolair Motul Suzuki‰Ûªs Waters began his charge to the front- managing to make passes on both Moss and Gibbs to move in to second position behind race leader Ferris.

But when the chequered flag flew, no one‰Ûªs performance could match that of CDR Yamaha‰Ûªs Ferris, taking his second consecutive win for the day by an impressive four seconds, while Waters crossed the finish line in second, followed by Gibbs who finished moto two in third.

When the final moto kicked off this afternoon, it was Gibbs who this time edged out Ferris to take the third holeshot for the day, however it was a disaster for CDR Yamaha‰Ûªs Ferris who went down after just a couple of turns, marking an early end to his day, and leaving the track in the hands of Racesafe.

With two laps in the books for the MX1 class, Gibbs continued to maintain his lead, followed by teammate Dobson in second, while National Pump Monster Energy Kawasaki Racing Team‰Ûªs Mosig held down third.

From there, Gibbs completely checked out on the MX1 field, showcasing his ‰Û÷diesel engine‰Ûª form, and allowing the bar to bar racing to happen behind him.

By the half way mark, both KTM Motocross Racing Team riders Gibbs and Dobson continued to dominate in positions one and two, while Mosig remained in third ahead of Jamie Law in fourth, and Crankt Protein Honda Racing Team‰Ûªs Wilson who rounded out the top five.

When the third moto for the MX1 class reached it‰Ûªs closing stages, there was little change to the running order, with only Mosig managing to get by Dobson to slot in to second position ahead of the KTM rider.

And when the chequered flag flew for the final time today, it was Gibbs who took the last race victory, while Mosig wrapped up moto three in second position, followed by Dobson who secured his best result so far this year finishing in third.

With a DNF from CDR Yamaha‰Ûªs Ferris in the final moto, the Thor MX1 round overall saw Gibbs take the overall at Wanneroo, while National Pump Monster Energy Kawasaki Racing Team‰Ûªs Moss collected second, and Waters finished round five in third.

‰ÛÏIt‰Ûªs awesome to take the win here, and walk away with the points lead going in to the break,‰Û