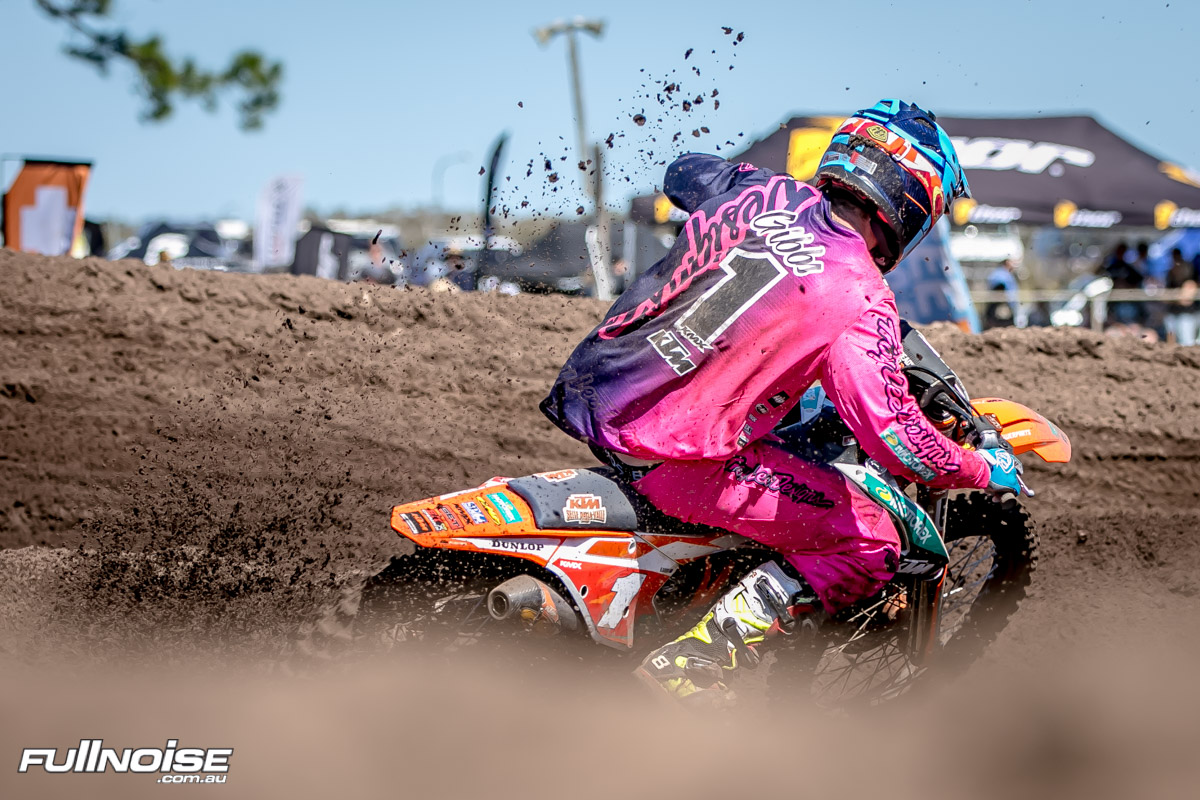 KTM Motocross Racing Team rider and 2015 MX Nationals Champion Kirk Gibbs has come out of surgery after being injured training for the Australian Supercross Championships at Queensland Motocross Park yesterday.

The newly-crowned Australian Motocross Vice Champion fell in a whoop section on the supercross track built in a partnership between himself, Todd Waters and Luke Styke, and took a heavy impact to his leg, which has resulted in a break to his femur.

His friends Todd Waters and Luke Styke were at the track with him and moved swiftly to make contact with doctors on his behalf, helping to facilitate swift attention at the hospital, and Gibbs was operated on last night. The operation has been a complete success, however due to the severity of the injury, gives immediate racing plans have all been put on hold.

The 2015 MX Nationals Champion will now be unable to achieve a career-long ambition in representing Australia in the Motocross of Nations when that event takes place on September 24, and will no longer contest the Australian Supercross Championships (September 17-November 13.

It's heartbreaking blow, both to Gibbs, who last weekend went ever so close to defending the Australian motocross championship title he won last year, and to the team, which has seen and helped Gibbs grow from premier class rookie into one of the most respected champions on the circuit.

The KTM Motocross Racing Team is contractually obliged to field two MX1 machines in the supercross nationals, and the team will continue to run super-sub Jesse Dobson as a replacement for injured Luke Styke, who has only just begun riding the motorcycle again after rupturing his Achilles tendon early in the year.

The team hopes to announce a second replacement early next week.

‰ÛÏKirk had an accident while practising at his Supercross track at QMP yesterday." Kyle Blunden, KTM Motocross Racing Team Manager explained. "It seems his front wheel has skipped one of the whoops, and he has gone 90-90, and over the bars. The pain was so high up in his leg that Kirk initially thought it was his hip again. He said to me this morning, ‰Û÷I looked down expecting to see my legs side by side, and one was sitting on top of the other one.‰Ûª So that's when he knew it was the leg, and not the hip.

"The staff there were able to get an ambulance to him very quickly, and Luke and Todd Waters were able to start contacting doctors for him and letting them know the situation, and we were very fortunate that he has got some of the best doctors at his disposal and we were able to get him in straight away. They confirmed that there was a break in the femur and it was slightly displaced, and he went into surgery late yesterday afternoon and the surgery was very successful.

"He‰Ûªs on the mend already, and from here it all depends on how everything knits together because the femur is a solid bone to break. He‰Ûªll be monitored and we‰Ûªll play it by ear as far as his recovery is concerned.

"It's a big blow to the team and for everybody involved, we've seen Kirk grow as a rider and as a person since 2012, and to see him finally get an opportunity that they've wanted their whole life, and then have that opportunity disappear is gut-wrenching.

"Kirk is someone that we know seems to bounce back stronger every time he gets hurt. And now that we know he has pulled through surgery okay, and is already on the mend, we are excited for what the future holds for him. Kirk has always been fantastic with coming back when he feels like he's ready. I think that aided him in being able to get the results that he did this year, because it would have been very easy for him to panic at the start of the year when everybody else was riding, but he let himself heal properly and when he did get back into it, it was at 110%. He is one of the smarter guys when it comes to managing his injuries.

"We obviously have sponsorship obligations to have two MX1 bikes on the track, so as soon as we knew that Kirk was okay, we started pursuing somebody relatively quickly. We are in the process of putting something together for a second rider right now, and hopefully we will be able to announce something early next week.‰Û