Kirk Gibbs falls agonisingly short of back to back titles 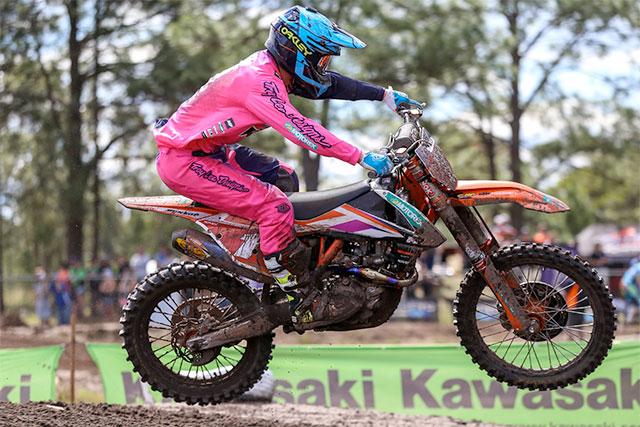 KTM Motocross Racing Team rider and 2015 MX Nationals Champion Kirk Gibbs has fallen agonisingly short in his bid to win the MX Nationals series for a second successive year, as the series concluded its final round at Coolum, on Queensland's Sunshine Coast.

As he‰Ûªs done all year Gibbs gave it everything he could on the day, but was beaten to the round win by Todd Waters and Dean Ferris, who both raced world championship motocross in Europe in 2015.

Gibbs entered the round with a six-point lead in the championship, and after posting 4-3 finishes for third on the day, the incredible consistency of his ninth podium finish in ten rounds still wasn‰Ûªt enough to defend the title, with Ferris taking the championship by just six points; 666 to 660.

It's been another incredibly impressive year for the Queensland-based South Australian, who was overlooked slightly in the pre-series hype before what was expected to be, and turned out to be, one of the most competitive MX Nationals seasons ever.

The number one plate holder proved that the class and work ethic of a champion will take a rider a long way, and despite injuries and setbacks he scored nine podiums, two race wins and three round wins, and held the red plate for longer than any other rider.

‰ÛÏObviously I didn't want it to end that way but Dean and Todd probably rode a little bit better than I did today," Gibbs admitted, "So, it is what it is and I'm really happy with how the year went. I was on the podium nine times out of ten, and it is unusual for that not to win you the championship, but then, everyone thought Dean and Todd were going to walk away with it this year, so it‰Ûªs good that we were still fighting over the title until the last race.

"Obviously there can only be one winner at the end of the year, but still it‰Ûªs hard with how much effort everybody‰Ûªs put in," Gibbs continued, "We would have loved to get the championship, and it was frustrating to have led this long and come up just short, but I think everyone realises that we put our heart and soul into it, we just weren't good enough this year. But we'll keep fighting, and we'll come back next year.‰Û