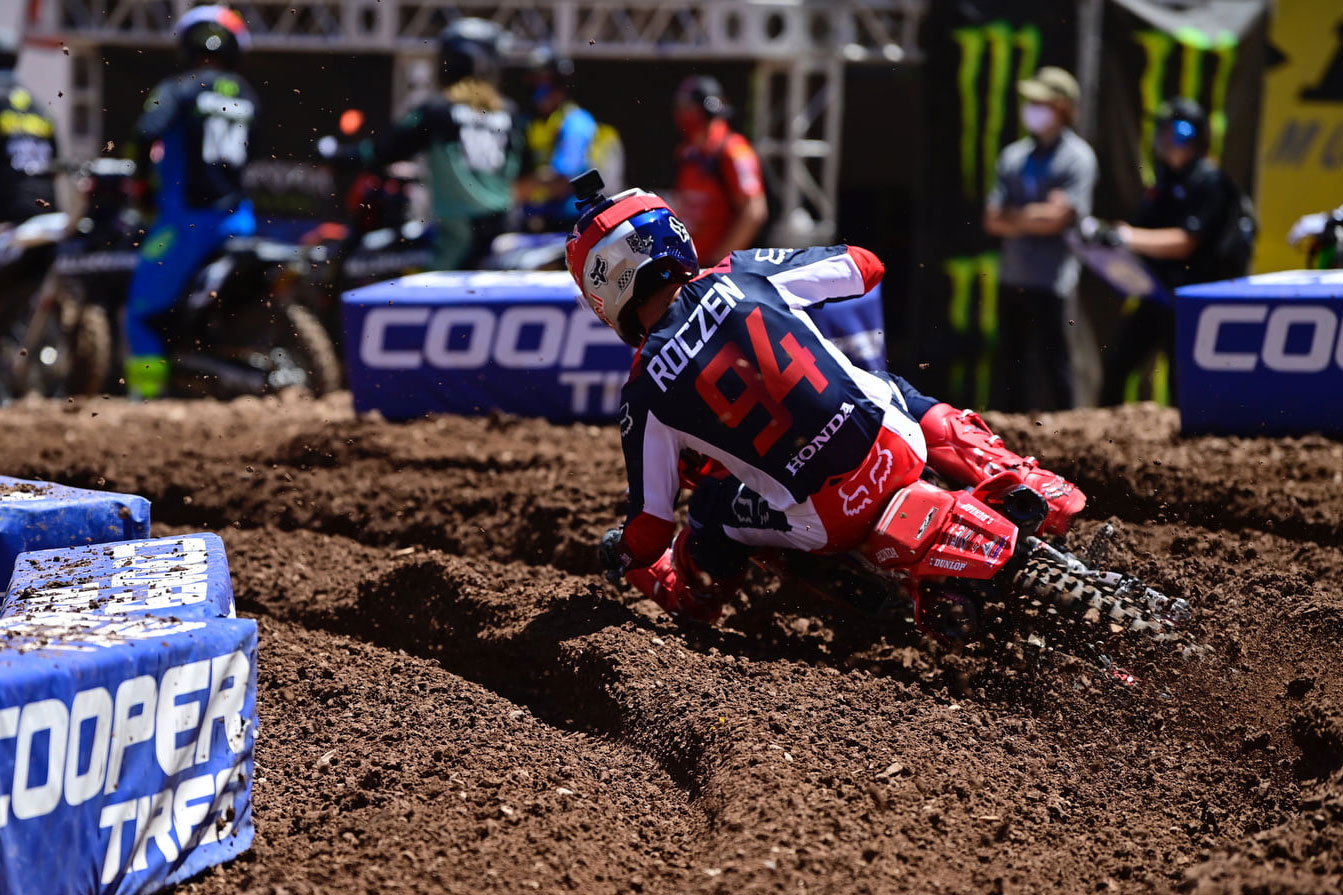 With round 15 of the championship have a few big nice flat corner, something rarely seen in AMA Supercross, the start was critical with a big wide expanse for flat tracking. It was almost the undoing for championship leader Eli Tomac when Cooper Webb almost took his front wheel out from under him as the Red Bull KTM Factory rider shot into the holeshot. Tomac stayed up but was shuffled mid-pack as he tried to regain control. Jason Anderson, Ken Roczen, Zach Osborne and Martin Davalos were in close attendance until in turn two; Anderson hit the ground hard after getting crossed up and landing on a tough block.


As the first few laps settled in Tomac was back in sixth, just behind Malcolm Stwart, but only six seconds of Webb's lead. Roczen was staying close to Webb, and after admitting during the week he was suffering from shingles, was expected to fade. It wasn't to be though with the HRC Honda Racing rider railing past Webb for the lead and onto lead his first lap since the series resumed in Salt Lake City!

Unlike previous rounds, Roczen was starting gap Webb while Tomac was methodically working his way past Stweart and Osborne to move into third place. 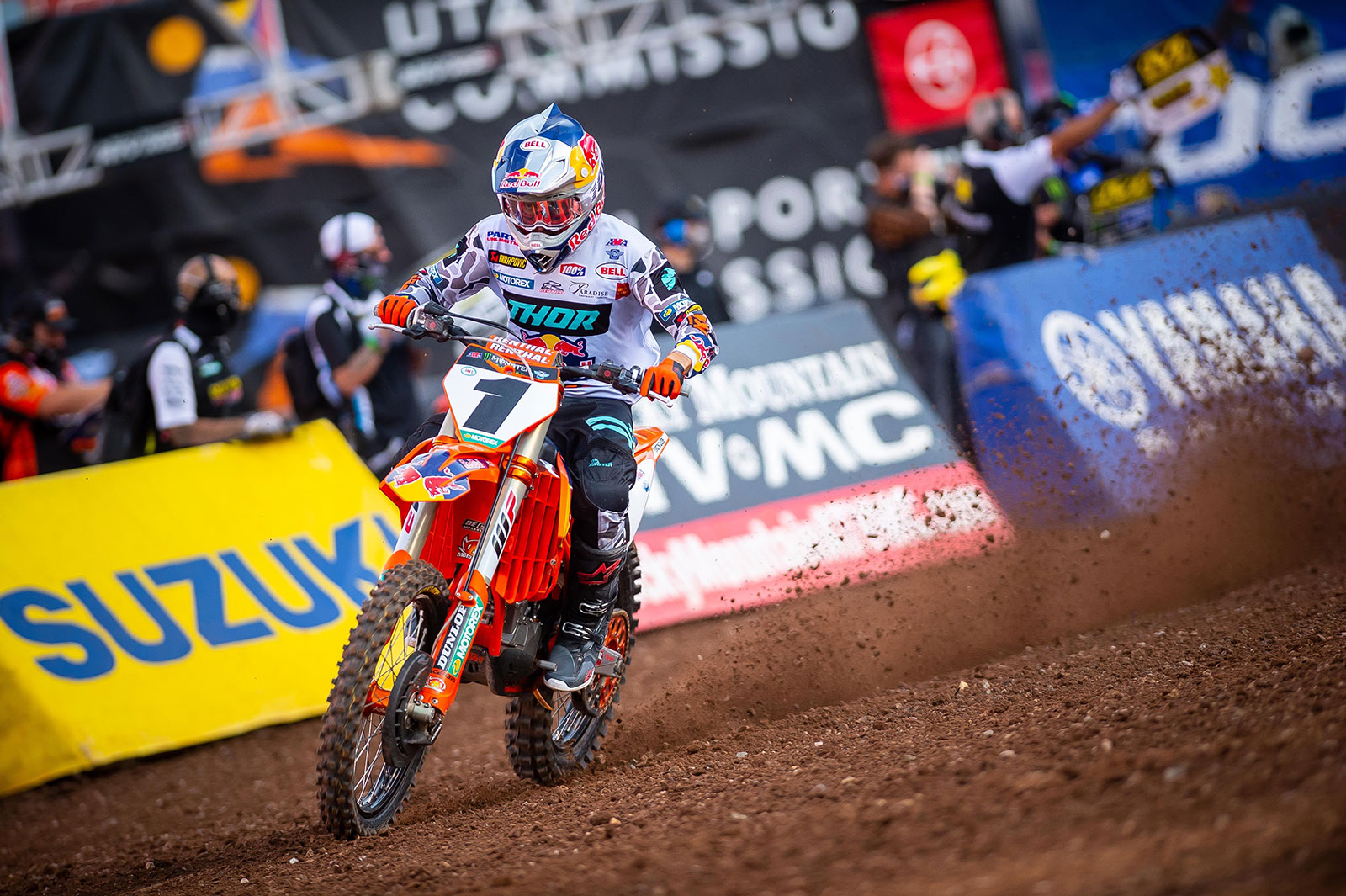 Red Bull KTM Factory Racing Team‰Ûªs Cooper Webb continued his podium streak in Utah with a runner-up finish at Sunday‰Ûªs 15th round. Photo: Align Media
The final ten minutes of the race played out in a disappointing procession with minimal action in the top five. Jason Anderson was having a shocker, and after surviving a big crash in the opening lap got caught up in a huge midpack pile up and called it a day.

Roczen went on to record the win, just under four seconds ahead of Webb while Tomac was seven seconds behind Webb with a third. Malcolm Stweart was fourth while Zach Osborne finished fifth.

"It's a big, big turnaround obviously after the last couple of races which is not easy to do," Roczen said from the podium. "I had fun out there, I got my bike dialled, and my physical condition was a lot better today. So I won the heat race and won the main in an awesome battle. I really gelled with the track today; and with the bike."

Eli Tomac still leads the championship by twenty-four points over Roczen who demoted Webb back to third in the standings with his win. Roczen and Webb now only a single point apart in the fight for second overall for the season. 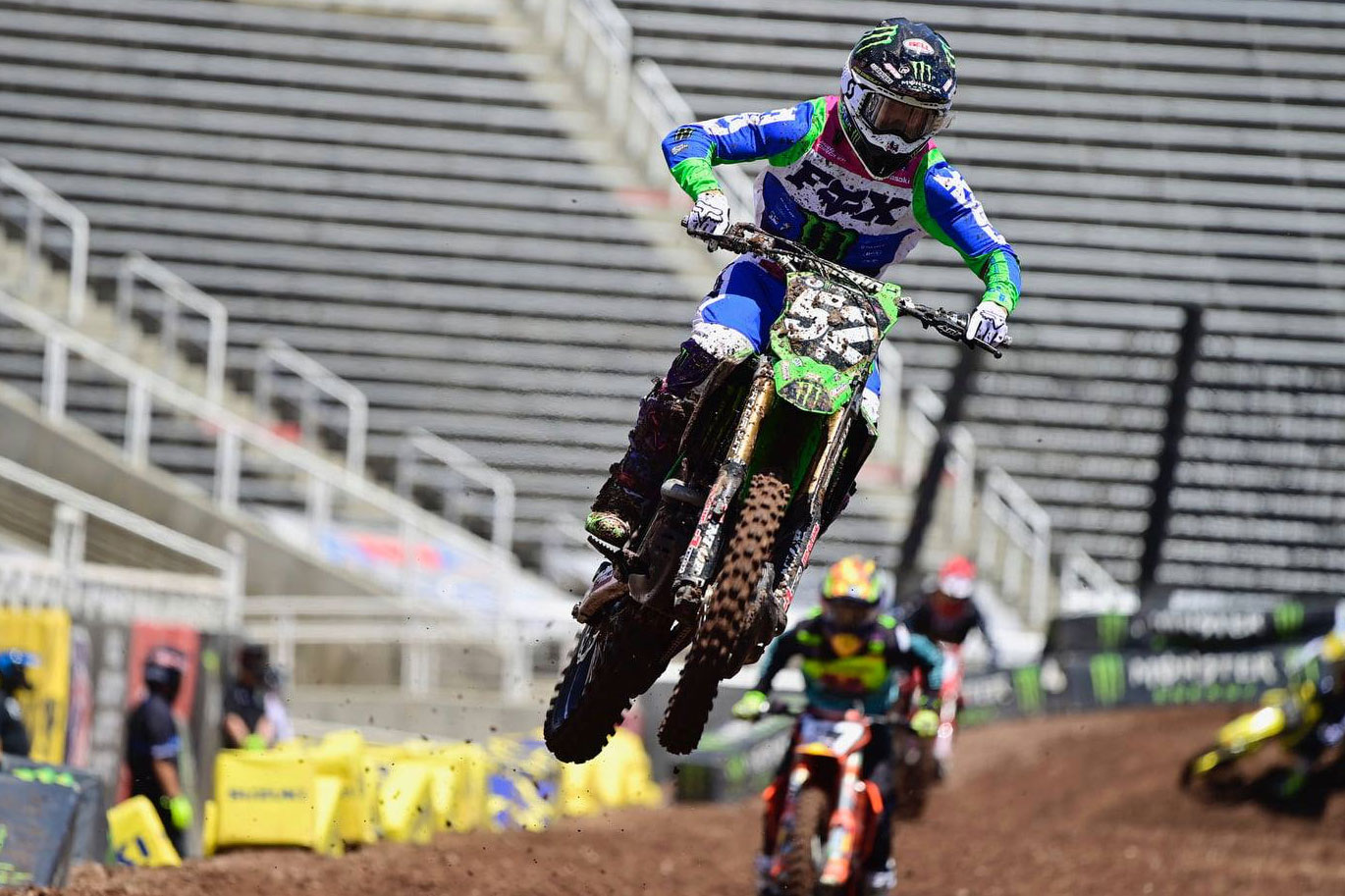 
Dylan Ferrandis had his drama's in his heat race with a crash that saw him finish seventh but come the 250SX West Coast main event he had no such dramas off the start claiming the holeshot ahead of Geico Honda's Christian Craig and Hunter Lawrence. Lawrence quickly came under pressure from the Pro Circuit Monster Energy Kawasaki duo of Cameron Mcadoo and Forkner. Aussies Jett Lawrence and Luke Clout both making a mid-pack start.

Ferrandis and Craig maintained the top two positions for the first few laps until Austin Forkner, who was on a mission, made it quickly into second place. By the halfway mark Forkner, despite being close couldn't get the better of Ferrandis while Cameron Mcadoo was eight seconds back in third, just ahead of Rockstar Energy Husqvarna rider Michael Mosiman. The two Lawrence brothers were also staging an entertaining battle for fifth and sixth.


With just over four minutes left to run Forkner closed in on Ferrandis' lead and with an aggressive pass had the Frenchman off the track and inheriting a healthy advantage. Mosiman also made a pass on Mcadoo to move into third place, Mcadoo then dropped a place to Jett Lawrence who was on a charge.

With a couple of laps to go Forkner had stretched his lead over Ferrandis to three seconds and headed for the win. All the action was the battle for the final podium spot with Jett Lawrence getting the best of Mcadoo and Mosiman in what was an impressive ride in his second full Supercross main event.

"I felt really good, that was one of the best races I've ever raced as far as Supercross goes," Forkner said, "My speed was super good, and I was really patient. The track was pretty easy to make a mistake on I feel like. I was patent and waited for an opening. It wasn't much of an opening; I had to cut the turn pretty tight and made a pretty aggressive pass, but you know, he would have done the same thing - he's done the same thing to me! All fair, it's racing. I'm really happy about that rude," he concluded.

Asked about Forkner's aggressive pass Ferrandis said, "I can't complain, I have done it before. I sucked, this race was just really bad for me."

"Once I crossed the finish line, I can admit it, I cried a little bit," Jett Lawrence said of his first podium in AMA Supercross. "Even though it's a third I have just got to be thankful that I am up here, thankful that I am alive right now and able to experience this." 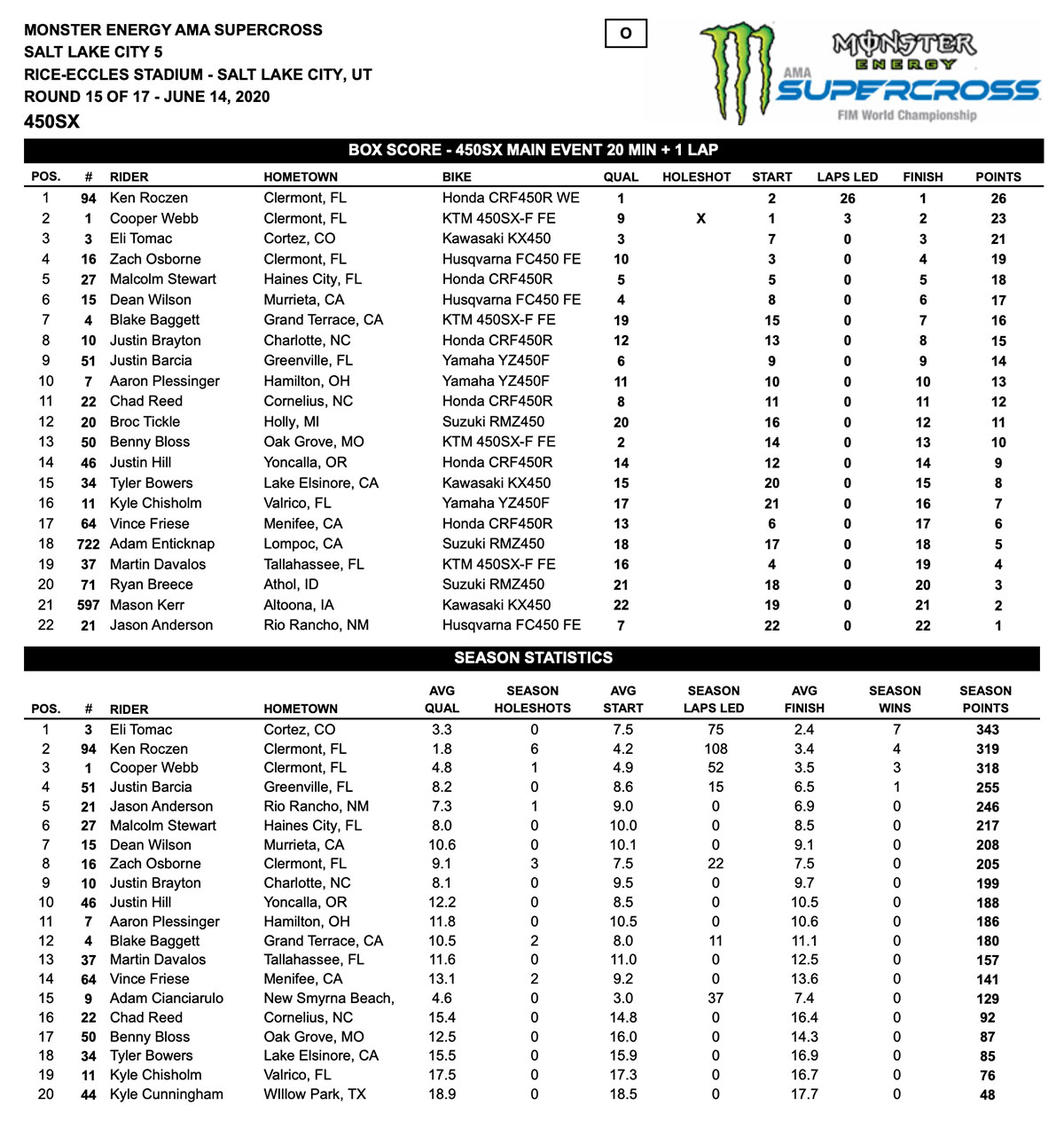 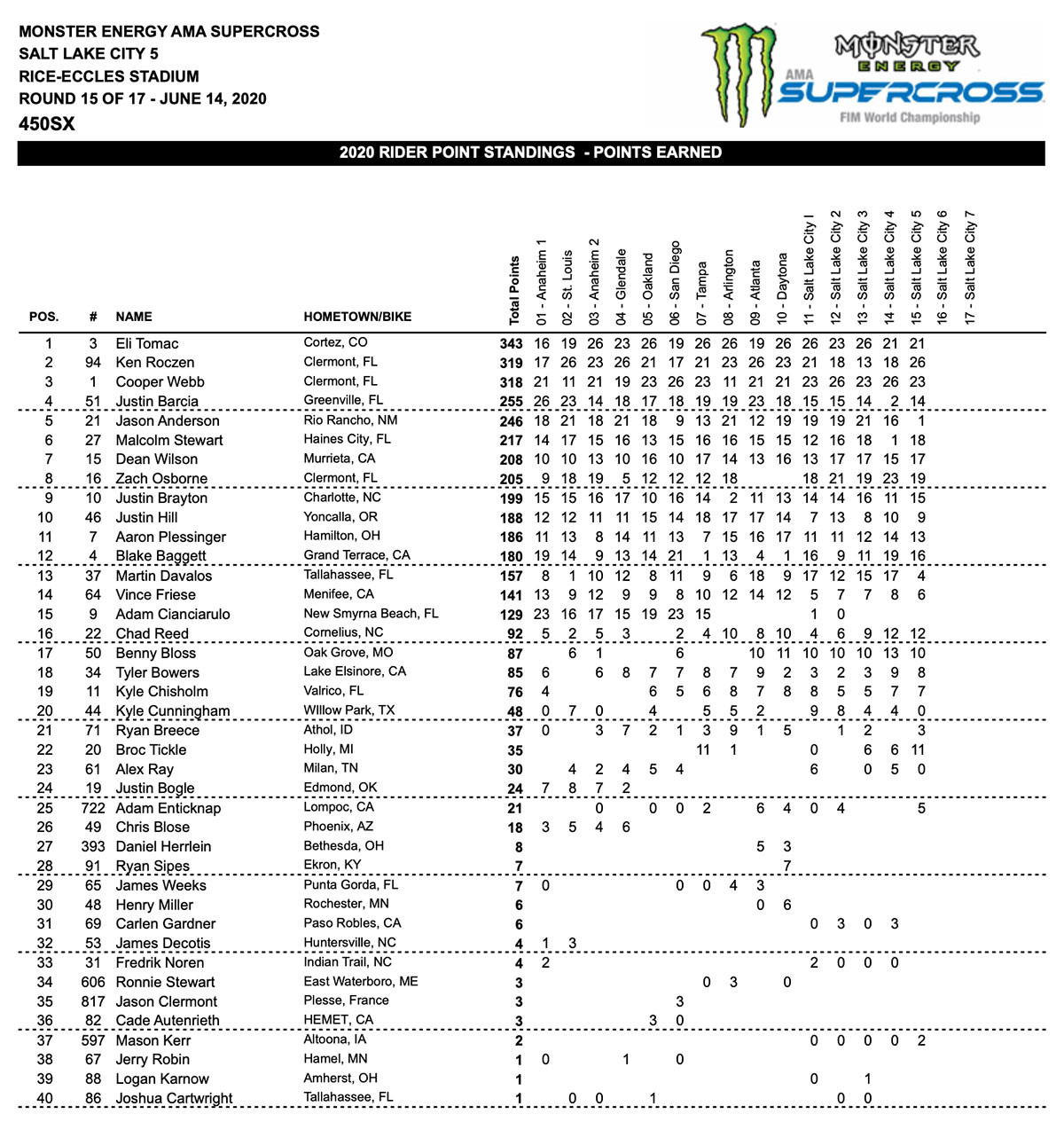 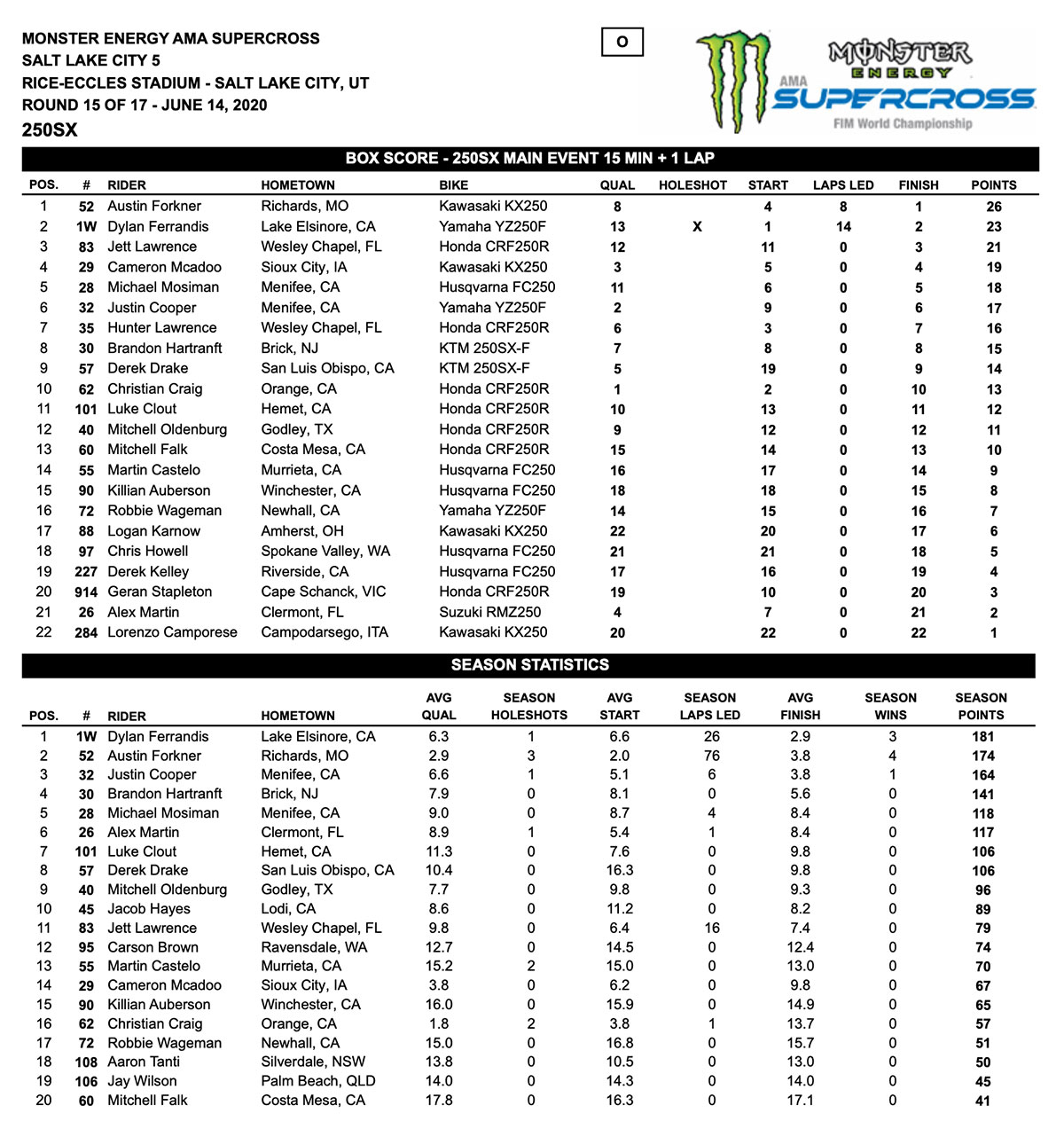 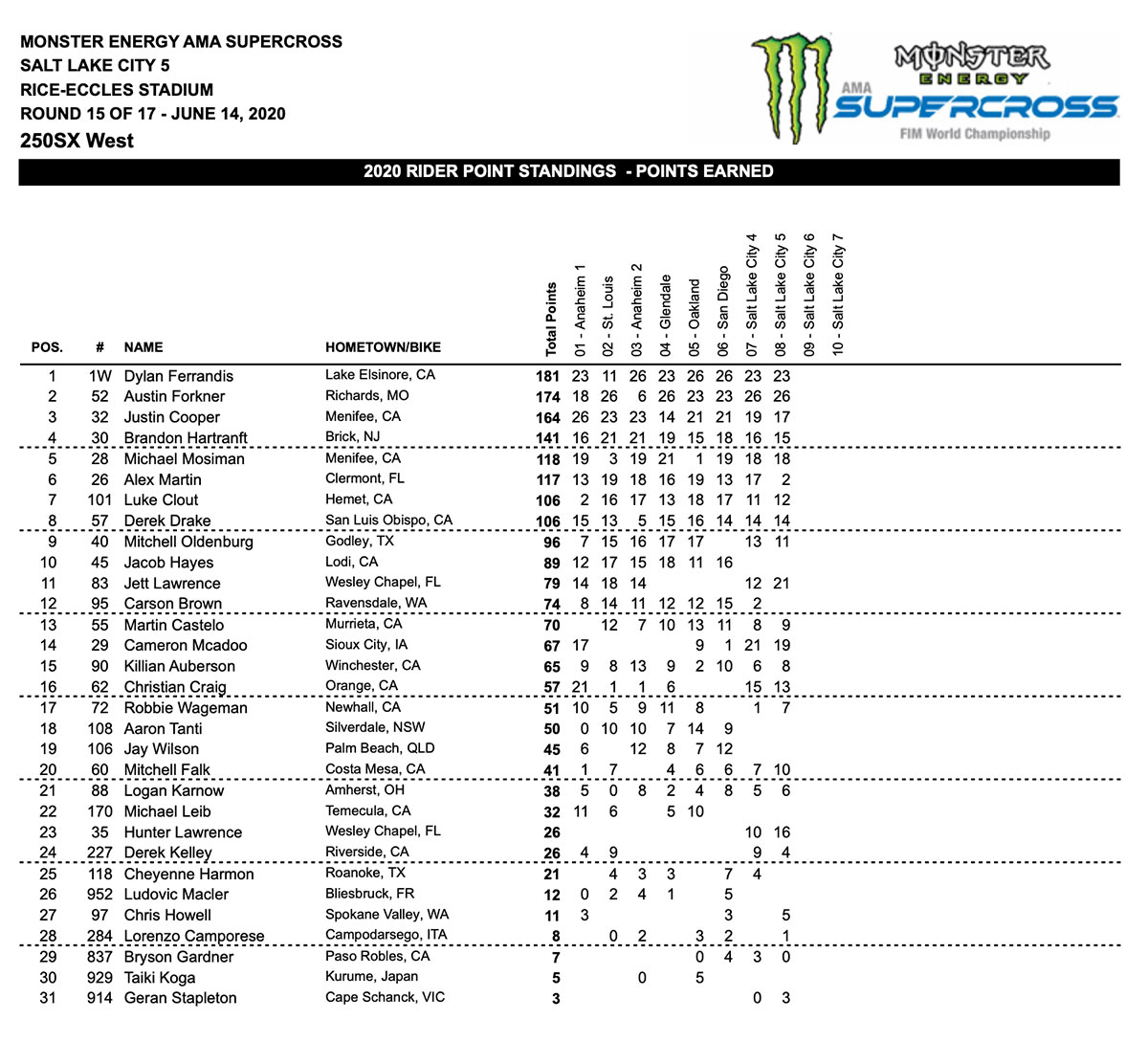