Kawasaki Name Their Line Up For SMX 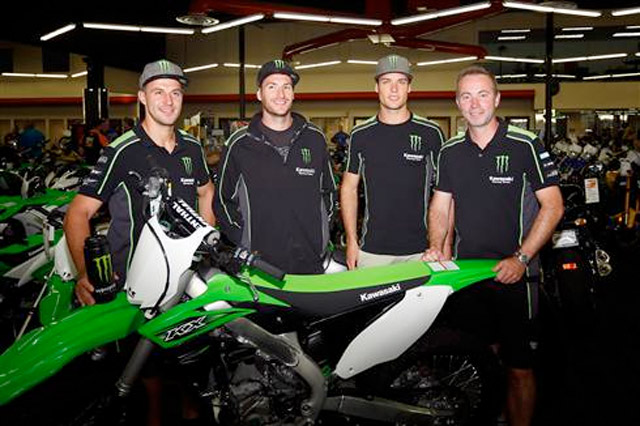 The Monster Energy Kawasaki MXGP teams will take part in the new Supermotocross event held in the Veltins Arena in Germany on October 8th with Clement Desalle, Jordi Tixier and Tommy Searle.

A new event organised by Youthstream after the MXGP season, the Supermotocross is an exciting concept of racing which aims to reach out to new fans as the event will take place in one of the most modern European stadium: the Veltins Arena, home of the famous German football club FC Schalke.

The event will be a ‰Û÷motocross race in a stadium‰Ûª and the seven manufacturers involved in the FIM Motocross World Championship will each line up a three riders squad as this race has an individual and a manufacturers' classification. The format is similar to the Motocross of Nations: each manufacturer will enter three riders in three races during the evening and the best seven results from nine will be taken for the final classification.

Clement Desalle, Jordi Tixier and Tommy Searle, who all race the MXGP series for the Monster Energy Kawasaki teams, will be involved in this event, the last one of the season for them. They will race against some of their usual GP opponents, but also against some American riders who will fly across the Atlantic for this first ever Supermotocross event.

"Kawasaki are part of the MXGP series and each season we work in partnership with the series promoters Youthstream on many areas to help grow and promote our fantastic sport." Steve Guttridge Racing Manager Kawasaki Europe said. "Our riders are the stars and our teams make it happen.

"The SMX stadium event is new both to us as a manufacturer and for our riders, but the initiative has a big potential to reach a bigger audience and so we take this opportunity to not only show off our KX motorcycles but even display our wider range of Kawasaki products to the fans there.

"So we are happy to join the party with our top MXGP stars; Clement, Jordi and Tommy will be racing for us as our Manufacturer team. Kawasaki would like to thank them for representing us at the SMX and we wish them the very best."