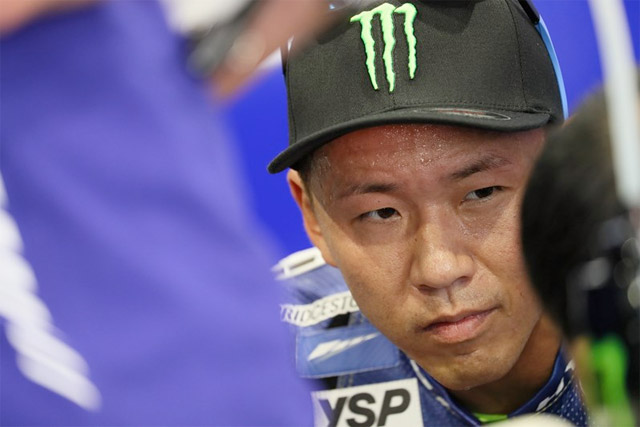 He will ride a YZR-M1 for the Yamalube Yamaha Factory Racing Team at the Twin Ring Motegi circuit in Tochigi Prefecture on October 16, 2016.

Nakasuga's upcoming participation will mark the fifth time in a row that he has entered the Grand Prix of Japan in the MotoGP class, with an eighth place finish in the 2015 as his best classification. Including his second place podium finish at Round 18 in Valencia in 2012, his 2016 wild card entry will be his seventh time racing in the premier class.

Nakasuga races in the premier JSB1000 class of the All Japan Road Race Championship for the Yamaha Factory Racing Team aboard the YZF-R1. Counting from Round 2 of last season up to Round 5 of this season, he is currently on a 10-race pole-to-win streak, displaying overwhelming speed that has kept him atop the standings and well as on his way to a fifth consecutive championship and a seventh career title.

Nakasuga also teamed up with MotoGP regular Pol EspargarÌ_ and World Superbike star Alex Lowes for the Suzuka 8 Hours at the end of July this year, contributing to bringing Yamaha its sixth Suzuka victory and its first back-to-back win since 1988.

With this wild card entry for the Grand Prix of Japan, Yamaha's main goal is to have Nakasuga, who is a development and test rider for the YZR-M1, evaluate the results of the bike's development in an actual premier class race.

"Last year I improved on my best result at the Grand Prix of Japan when I took a top-10 finish [8th], and I was able to show how much both the YZR-M1 and I had improved." Nakasuga explained. "This year I'll again be participating as part of my development duties with the M1, but I look at it as a once-in-a-year chance to give my absolute maximum and test my skills against the world's top riders.

"Last year I was able to battle with my Suzuka 8 Hour teammates Pol EspargarÌ_ and Bradley Smith in the race, and this year my goal is to be in a position to battle with those guys again. Please come and cheer us on at the race, and let's make this year's Grand Prix of Japan an amazing one."

Additionally, Yamaha strives to deliver the excitement of motorcycles and motorsport to as many spectators as possible, as evidenced by its factory entry in the Suzuka 8 Hours race. By lining up Nakasuga, Japan's undisputed top rider, alongside the four fellow Yamaha MotoGP riders on the grid of one of the Japan's biggest races, Yamaha affirms this mission.