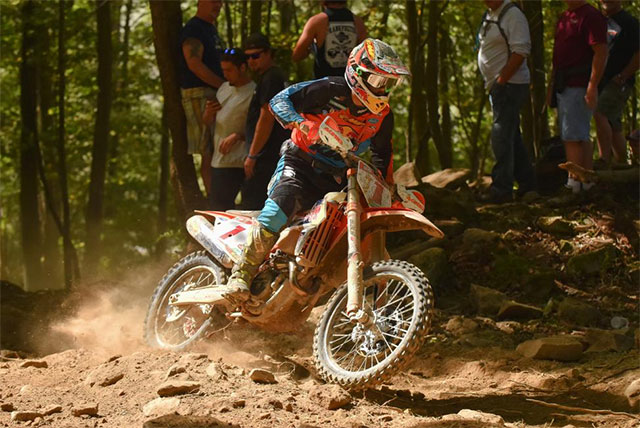 FMF/KTM Factory Racing's continued his dominance at the eleventh round where he earned his eighth overall win of the season today, September 25.

MCS Racing Suzuki/Obermeyer/Kenda/MX Tech/Fly Racing's Ricky Russell jumped out to the early lead once the green flag waved and earned the $250 All Balls Racing XC1 Pro Holeshot Award. Russell was able to use his good start to his advantage and avoid the first turn pileup that involved Lojak Cycle Sales/JTR OffRoad's Jason Thomas and Westfield Powersports KTM Presented by Moose Racing's Ashburn.

Misfortune hit Ricky Russell in the third turn allowing SRT/KTM/Kenda Tires' Cory Buttrick to lead the way into the woods. Buttrick maintained the lead position as he checked through timing and scoring for the first time. After getting off to an unfavorable start, Kailub Russell made quick work and held the second place position behind Buttrick.

"As easy as it may look sometimes, it's never easy," said Kailub Russell. "The track was pretty brutal with the dusty and hard-packed conditions, and it really takes a toll on your body and you just have to be patient. I got a terrible start and I was just impatient after that and continued to push through. 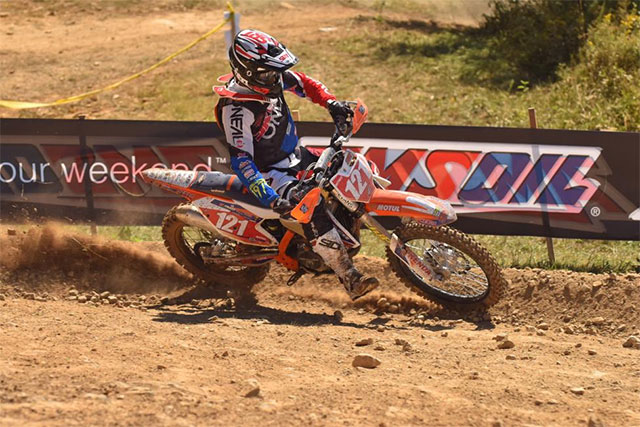 Cory Buttrick lead the way throughout the first lap. Photo: Ken Hill
While Kailub Russell was busy pushing through the field, Rocky Mountain ATV*MC/KR4 Arrive-N-Ride Team's Thad Duvall was following in his tracks. Duvall sat within striking distance of Russell at the conclusion on the second lap, but faced bike setup issues which ultimately set him off the pace.

"The course was rough and I felt a little off all day," said Duvall. "I just couldn't ride my bike the way I wanted to. I decided to slow down and ride my own race to feel safe and keep it off the ground. When Ricky caught up to me I realized I wasn't ready to get third again so I just put my head down and charged pretty hard the last few laps."

Meanwhile Ricky Russell was determined to return to the front pack after his crash at the start of the race. With Kailub Russell beginning to pull a gap on Duvall, Ricky Russell was closing the gap on him. Kailub Russell would face a few small mistakes in the latter half of the race resulting in his radiator shroud being displaced. With only two laps remaining the podium contenders all decided to ride smart through the rough and rugged track conditions. 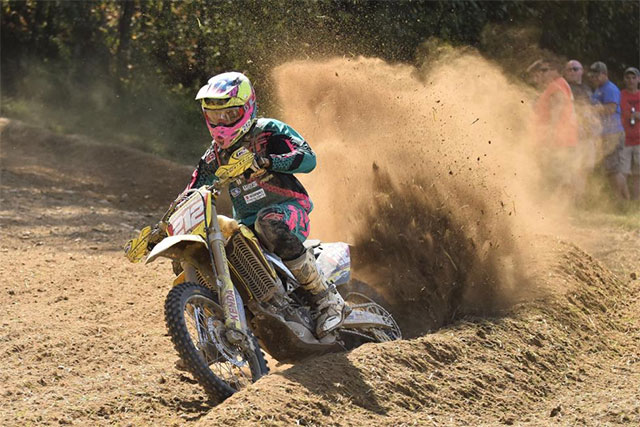 "I got off to a great start and then just got a little wild in the third corner and went down," said Ricky Russell. "I got back up and was mid-pack trying to work my way through the dust. I crashed a few more times and then I started picking my lines and slowly worked my way through everyone. It's been a rough year with ups and downs but it just feels good to finally make it happen." 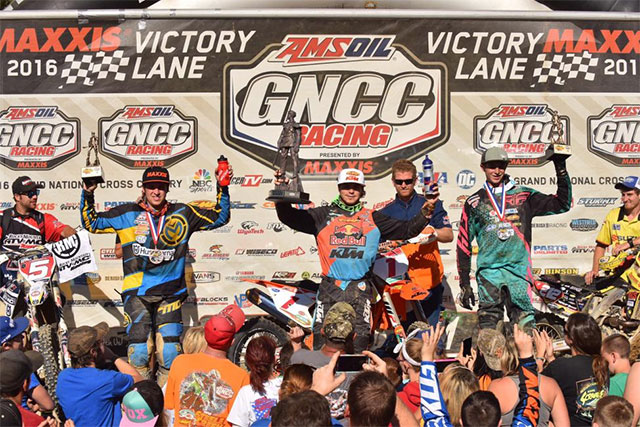 Overall Podium: (2) Thad Duvall, (1) Kailub Russell, (3) Ricky Russell. Photo: Ken Hill
SRT/KTM/Kenda Tires-backed Steward Baylor Jr. had another stellar performance where he just finished off the podium in fourth. Ashburn would recover from the first turn crash to place to earn ninth overall and fifth in XC1 Pro. Cory Buttrick's breakout ride resulted in sixth in class in addition to rounding out the top ten overall.

The familiar face of Coastal Racing/Husqvarna/MSR's Craig Delong found himself in the early lead earning the $100 Hot Cams XC2 Pro Lites Holeshot Award. Delong's teammate, Layne Michael, made an early push for the lead and continued leading until finding trouble in the FMF Powerpoint. Bollinger was able to capitalize on Michael's mistake and take over the lead. Bollinger continued to lead until the checkered flag. Michael recovered for second in the XC2 Pro Lites class and AmPro/N-Fab Yamaha's held onto third.

"I was fighting with vision issues all day," said Bollinger. "Once I recovered from my bad start and had a clear track I was able to put the hammer down. I had something to prove after Unadilla, because that was one of my worst rides. It feels good to be back on top."

Main Photo: Winner Kailub Russell will head into the Powerline Park GNCC with a 50-point lead in the standings.
Photo: Ken Hill