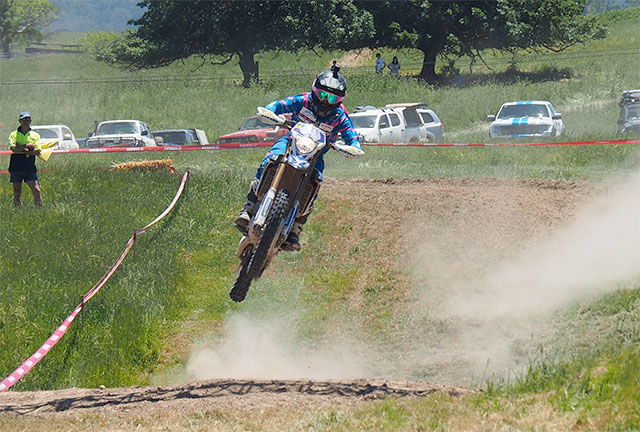 In the final hours of the final day of the 2016 Yamaha Australian Four Days Enduro at Merrijig in Victoria, it was with great anticipation that proceedings would soon get underway, as a palpable and cheering crowd in a sea of team colours lined the track boundaries, jostling to get a glimpse of the riders in each and every class for the day.

Masters Final Moto was the first race for the finale, the over 45‰Ûªs class lined up at the starting gate ready to kick their bikes in to gear for their six lap race. Aussie enduro mainstay and class favourite, David ‰Û÷Flea‰Ûª Fleming was the man who got the hole shot leading the Masters class through the lengthy dust track.

After pulling a decent gap on the rest of the field, Fleming looked to have it locked in the bag. Increasing his lead each lap his efforts on the throttle culminating to adding another Championship title to his collection. In true celebratory fashion, the flamboyant Flea finished across the line in first.

Brett Steel and Jason Salopayes both cemented their fate today concluding the four days in second and third respectively in the Masters class Championship.

As soon as the Master‰Ûªs were off the track, attention turned to the Veteran‰Ûªs (Over 35‰Ûªs) class as they too were gunning for Championship glory with one final and manic dash to the flag. Although leading the Championship, Dylan Rees sat in third for most of the Final Moto allowing Kirk Hutton to slip through and take first place.

Damian Smith and Dylan Rees sat second and third respectively. With the combined times over the four days tallied, it was Dylan Rees who was a forgone conclusion, coming out victorious claiming the 2016 Yamaha A4DE Veterans Championship. Damien Smith and Kirk Hutton equally taking the second and third position on the Championship podium respectively.

Active8 Yamaha Yamalube‰Ûªs Tayla Jones, was an absolute force to be reckoned with today. Jones pulled straight off the start, winding on the throttle to lead by a mile before the half way marker in the first lap! Jessica Gardiner fought off the hard charging girls to remain in second, chasing Jones‰Ûª ever extending gap with the battle on track playing out for third between Tamara Gray and Sophie Coldcicutt.

Gray took third at the last, although nothing could overshadow Tayla‰Ûªs intense speed and skill which saw her launch over the finish line in and blur of pink and blue, the Yamaha rider truly cementing her winning 2016 Yamaha A4DE Championship efforts.

Despite a mighty fight from Gardiner in the Final Moto it was Jemma Wilson who had the quickest time over the four days to take second in the Women‰Ûªs Championship, with Gardiner in third.

With all championships now crowned the 2016 Yamaha Australian Four Days Enduro has concluded after what has been a succesfful and thrilling four days of gruelling competiton. Competiors will now head home and rest, ready for the 2017 A4DE.